Steffen Thalemann Buttermilk Falls Inn and Spa.
"Italian Alps” is the term that’s stuck on the tip of Adam Glinert’s tongue. Sitting behind his cluttered desk in the main house of the Buttermilk Falls Inn and Spa’s 70-acre haven, Glinert is sipping coffee, chatting with the construction workers who keep popping their head in the door, and gushing about his new office down by the river. The low valleys and contrasting steep mountains that make up Milton’s landscape inspire Glinert to say that he feels like he’s in Italy. Sheila Mannese from the Meet Me in Marlborough farming coalition seconds Glinert’s opinion, describing the scenery as Tuscanesque.

Today, winter white has transformed the town into an ice-coated model scene, with snow blanketing hills and branches, and geese cautiously making their way across frozen ponds.

Glinert is the general manager of Buttermilk Falls, and even though he’s only been at the inn for eight months, he already feels completely at ease. “It’s very at-homey here. It’s family owned, and it’s also run like we’re all family.” Despite the loose ends that any new administrator faces when bringing a fresh perspective to their business, and the three simultaneous construction jobs that have redirected traffic through the grounds, Glinert goes about his daily job with a smile, proving that he adores his new professional role.

Continuing to gush about Ulster County in general and Milton specifically, Glinert comments on the area’s pleasant residents, saying, “Everyone here is outgoing, gracious, and hospitable.” He also excitedly plugs Henry’s, the inn’s fresh-faced, American regional restaurant that will be opening in the beginning of March.
Buttermilk Falls reels in guests from all over the world, but plenty of business comes from locals who will book a room for a weekend “stay-cation.” Swimmers lap against water pressure in the “endless” pool, letting them get a workout while staying in place. Green-minded visitors appreciate the self-sustaining farm, where everything from peaches and herbs to flowers and pumpkins are grown. When asked what distinguishes Buttermilk Falls from other inns, Glinert quickly and simply tells me, “We’re the only ones that do what we do,” going on to explain how guests have tons of land to stroll or hike in, peacocks that wander around, and cottages as an alternative to guest rooms. 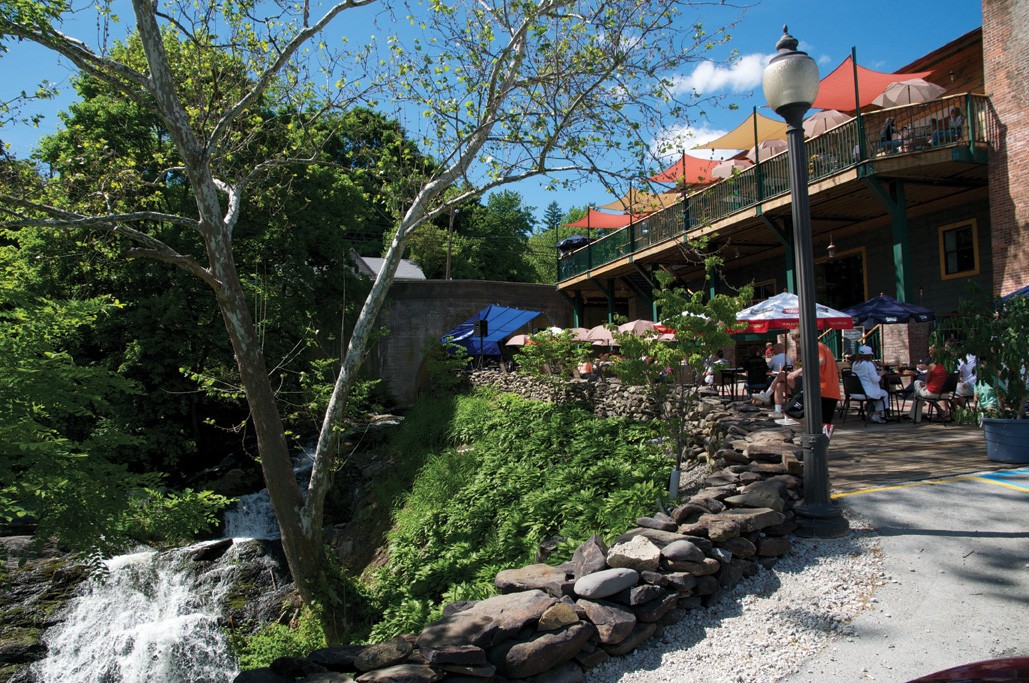 Food Security, Farm Conservation
Mannese, one of Meet Me in Marlborough’s founding members and the current executive director and president, strives to bring sustainability to farms and also to educate people on the importance of local farming. The organization is composed of Milton and Marlboro farmers and businesspeople working together to promote local agriculture and agritourism. Expressing the importance of keeping the country’s food supply within our borders, she says it’s necessary to start with local farmers who can champion that type of home security. Mannese continues to explain the perks of supporting area farming, saying, “In essence, we know our farmers, and there’s a tremendous value in knowing both our farmers and the food that they produce.”

Limited funding means that the organization depends solely on volunteer work to get the job done. In order to keep joining financially affordable, the entire budget has to be low as well, which makes marketing a challenge. The founders and current members volunteer their time to keep the company running and fresh ideas brewing. Meet Me in Marlborough’s new program, Marlborough’s Bounty, has local farmers heading to markets outside their usual turf, to sites in Manhattan, Westchester and Rockland Counties, Connecticut, and New Jersey.

Having grown up in Marlborough, even Mannese didn’t realize the natural beauty of her own hometown—regardless of the hours she’s spent in local orchards and with her horses. When farmers finally showed her around their properties, she began to realize the art and science behind agriculture. Now she tries to show others that farming is much more complicated and intricate than most people assume. According to Mannese, the greatest perk to Meet Me in Marlborough is seeing the unity it’s brought among local farms. Farmers who didn’t know each other at first have now been introduced and linked. Looking beyond the crops and soil, Mannese says, “We are promoting the town and getting people to come in and enjoy what we have, which is a goal not only to the farmers but also to local businesses.”

The new Farm Trail, designated by the New York State Deprtment of Agriculture and Markets, is similar to area wine trails; members can follow a specific route and make stops at several local farms. The Shawangunk Wine Trail stretches from mountain climbers’ favorite peak, the “Gunks,” down to the Hudson River. Eleven family-owned wineries in Ulster and Orange Counties make up the trail, including Marlboro’s Benmarl Winery, Stoutridge Vineyard, and Glorie Farm Wineries. Each winery on the trail is on the smaller side, making it easy to stop at several in a day. If you’re going to venture out of Marlboro, special events along the wine trail include a Strawberry Festival, Lobster Fest, and summertime Music in the Mountains. Passing by restaurants, horse farms, and antique shops, you’ll meet with campers, riders on horseback, and men with fishing poles slung over their shoulder.

The Hudson Valley is thought to be one of the oldest wine districts in the country, and when the Village of Marlborough was established in 1788, a cluster of grapes was carved into the seal. Originally, the 37 acres that is now known as Benmarl Winery was first owned by farmer Andrew Jackson Caywood, who tested out genetic crossings of different grapes to form new hybrid wines. When artist and illustrator Mark Miller bought the property in 1957, renaming it Benmarl, he continued with Claywood’s experimentation and created the Société des Vignerons to provide annual support for research. Society members were eventually repaid with Miller’s wine creations. Today, Benmarl produces reds, whites, and sweet wines, aged in either oak or stainless steel, and visitors are rewarded with winemaker workshops, grape-stomping festivals, outdoor concerts, and views of the river and the Berkshire Mountains.

After spending the day trekking through farmland and vineyards, Marlboro has options for unwinding with a hearty meal and quality music. The Hidden Cellar boasts Italian dishes and the Raccoon Saloon has been winning awards for its burgers and homemade French fries and housemade ketchup for 15 years. Just down the road, you can take in dinner and a show at the Falcon, opened by Tony Falco a year ago. Instead of creating a typical bar that sometimes features a live band, Falco built an honest-to-goodness music venue that happens to have a delectable menu and clever cocktails. The antique building, which dates back to 1800, when it was a button factory that ran on water power, now has a wide stage, a part-contemporary, part-rustic bar, and local art on the walls. On a recent evening, “La Vie en Rose” floated up toward the peaked cathedral ceiling as Amy Correia belted out the French verses and wooed everyone in the darkly lit restaurant.
Falco aimed to design a family-friendly place where kids are welcome, and where there’s never a cover charge and patrons are asked to donate what they can for the musicians. “Kids should have somewhere where they can look and listen and appreciate the arts,” Falco says. Servers and guests—even the little ones who fidget in their seats—stay serene and hushed during performances, illustrating how much the musicians are respected. “Everyone wants to play here,” Falco says matter-of-factly, including well-known jazz musicians and solo artists who are trying to make a name for themselves. To honor the world-class musicians who play melodies from around the globe, Falco offers themed dinner specials coordinated with the music.

Gateway to Ulster County
The Village of Highland, located in the Town of Lloyd, boasts two of the area’s biggest draws: The nature-rich Hudson Valley Rail Trail and the Walkway over the Hudson. Town of Lloyd Supervisor and lifetime Highland resident Ray Costantino says, “The Rail Trail was my dream and agenda for years,” and he was thrilled when it finally came to fruition.

The Rail Trail, which stretches from Highland toward New Paltz and connects with the Walkway, is a nod to the townspeople who insisted on maintaining the sweet country way of life instead of succumbing to corporate pressure. Rollerbladers will appreciate the breadth of the 12-foot-wide paved trail, which was contrived in their honor—the goal was to make the path wide enough so that two skaters, arms flying from side to side, could comfortably pass each other. To gain community interest, annual events are held, like September’s nighttime Moon Walk with cider and doughnuts, storytellers, and a bonfire, and the WinterFest, where Hudson Valley restaurants compete for the title of Best Chili.

Costantino and his wife Claire, vice-chair of Walkway over the Hudson, are a couple in love with all things Highland. The Walkway successfully preserved the 122-year-old railroad bridge that connects Highland to Poughkeepsie. (It is also estimated that one million people will cross the span in 2011.) Thanks to the Walkway, Poughkeepsie locals have discovered the village that’s straight across the Hudson River, and often travel to Ulster County to take advantage of the bridge’s free parking. While the Walkway is still pretty new, having opened in October 2009, Steve Densmore, a spokesperson for the Walkway’s nonprofit group, said that there are already several additions and improvements in the works. Tour guides and a Visitor’s Center are expected to be added, along with tables and benches, shaded areas to take a break in, and landscaping.

Small-town life in Ulster County is well preserved, thanks to the dedication of the area’s engaged citizenry. Vivian Wadlin, co-owner of the About Town newspaper with Lisa Gutkin, says, “I cannot think of another place I would consider living.” About Town was started in 1984 as a way to get the voices of southern Ulster County’s small businesses heard. Today, articles often focus on the area’s history. “The rich past of Ulster County fascinates me,” Wadlin says. “The people who built this community worked so hard. We have no idea of our forbears’ efforts to make this county what it is today.” Trading shopping malls, brand names, and view-obstructing buildings for small record stores, mom-and-pop delis, and heart-stopping views that can only be found in the Hudson Valley, these triplet towns are simply thrilled to be churning out fresh produce, bottled wine, new musicians, and dynamic entrepeneurs. 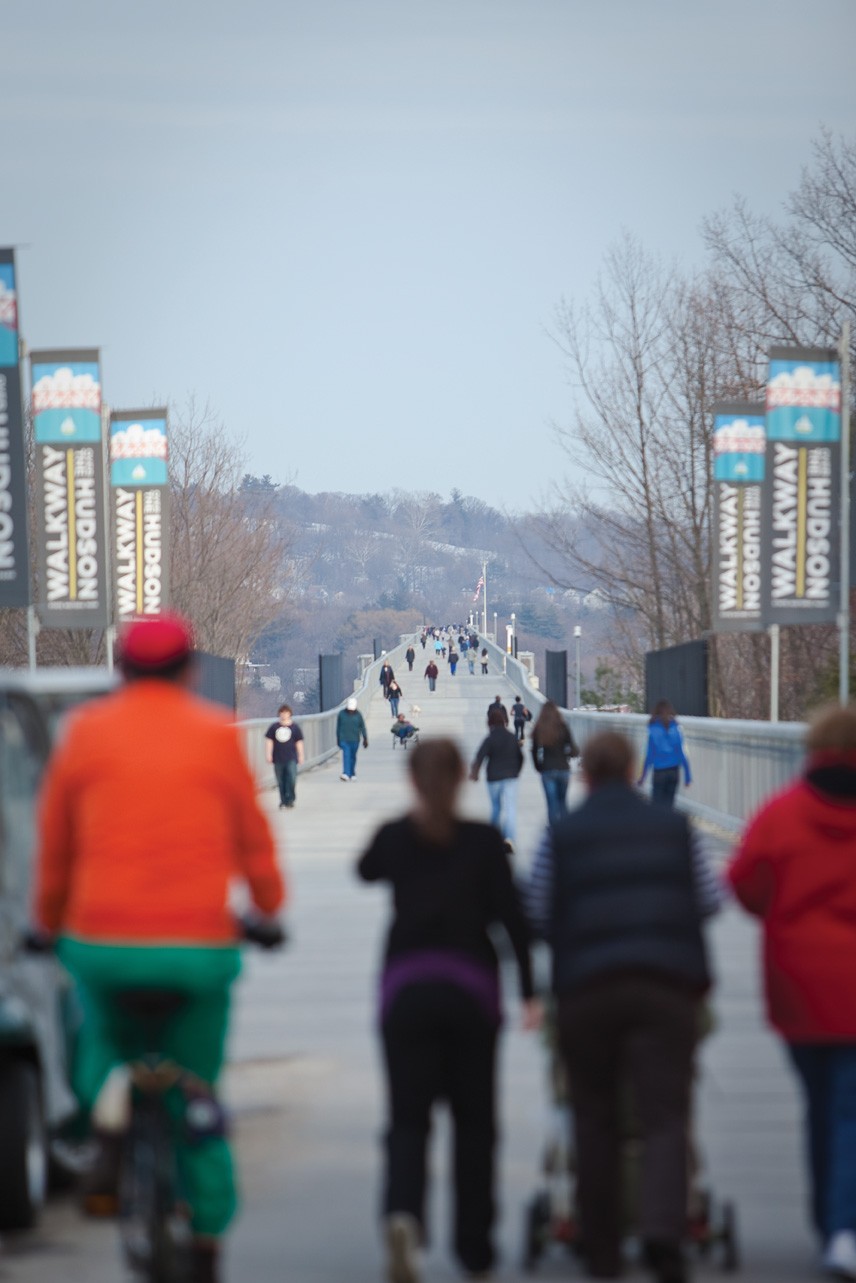