Transport of Joy: On the Bus in the Hudson Valley 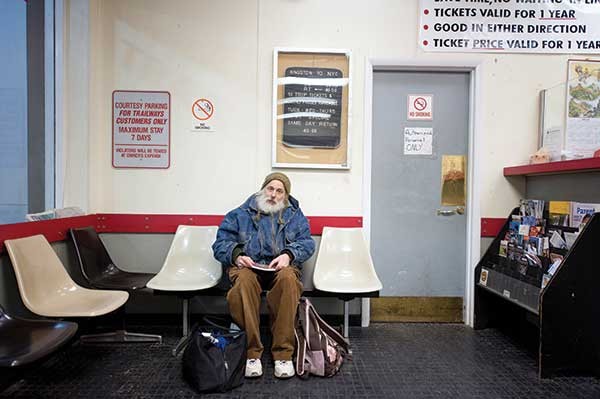 I don't drive. I have no desire to feel 170 horsepower purring beneath my steering wheel. In fact, I'd rather someone else drove me. And since I live in the off-the-beaten-track hamlet of Phoenicia in Ulster County, I am an inadvertent expert on rural mass transportation.

Currently, the Trailways bus to Manhattan is my biweekly ritual: along sinuous Route 212 to Woodstock, over to straight-arrow Route 28, down the Thruway. There are high points of my trip: placid Cooper Lake, the Zen monastery, a modernist sculpture by Anthony Krauss outside the Woodstock Elementary School. Route 212 hugs the Beaverkill, and one can watch its progress from season to season, sometimes impetuous, sometimes frozen.

Nine years ago, my life was transformed by an interview with a woman from the Dutch Barn Preservation Society. "A hundred years ago, every house had a stable," she explained. (I forget her name.) "When you ride around the county, you will notice them now." Her words were prophetic. Now I seek out stables, barns, toolsheds, garages, cabins, woodsheds, art studios, chicken coops, from my bus window. Some are tiny—perhaps even former privies! For many years, I've had the fantasy of living in a converted henhouse behind a stately Victorian. Gazing through the window, I search for my ascetic fantasy home.

A bus is high—about the same height as riding horseback. You can look down your nose at ordinary Buicks and Hondas. A bus is huge—19 tons. You know, unconsciously, that it will win any battle with a smaller creature. If you hit a deer, you'll just keep going. People buy Humvees with this intention, for which I despise them, but a bus is different—it's a collective enterprise, like a six-story apartment building in motion. The tenement I lived in for 10 years in the East Village contains approximately the same number of residents as a Trailways bus. 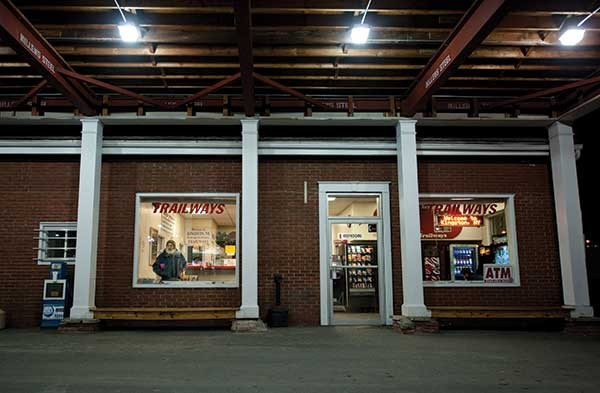 A bus is neatly divided in thirds: the first third (behind the driver) is the domain of the aged and the nervous. The middle third is for readers. The last third is inhabited by music listeners, with bass notes pouring out of their earphones—always rap and techno. No one listens to Joni Mitchell anymore. At least, not on a bus. The rear third of a bus trades distance from the driver for proximity to the bathroom, with its morbid acidic stench. Usually, I sit in the middle third.

Like most civilized people, I prefer having my own seat row—which is not so difficult, due to my resemblance to a homeless petty thief. I'm the last person to get a seatmate, and then it's usually a young bearded dude with an expression of: "We beard-wearers must stick together."
•

Typically, my time is also divided in thirds: one third sleeping, one third reading, one third eating. I eat for about 27 miles. For this purpose, I always carry an issue of the London Review of Books. How better to savor my lima bean stew than by simultaneously perusing a critique of The Labour Tradition and the Politics of Paradox—and occasionally glancing out the window at the Newburgh exit? (By then, I'm usually on the Thruway.)

When I am not sleeping, I watch others sleep. Normally, the only people you see dreaming are lovers and children, so it's nice to watch strangers in the relaxed postures of somnolence, their mouths drooping, their hair half-crushed.

In the early days of cell phones, you could also learn intimate details about your bus-neighbors. Once a middle-aged woman in front of me conducted a long, tragic conversation with her boyfriend, recounting all his failings. Finally, just south of Kingston, she said, "You're breaking up." But she was wrong. They both were breaking up. Do you ever feel you're listening to a poorly written radio drama?

One of the bigger mysteries of bus travel is ticket staring. Often a passenger will spend 20 minutes staring at a bus ticket. What do they hope to learn from this? Are they reading the small print on the back, contemplating the news that "Issuing Carrier will be responsible only for transportation on its own lines in accordance with tariff regulations and limitations"? Are they thinking: "Gee, I bought this ticket at 1:53 p.m. I was only seven minutes early! I could've missed the bus!" Or are they thinking nothing at all, just resting their eyes on the comforting numerals of the stub?

Meanwhile, an elderly but cultivated woman sits across the aisle from you, then opens a book by Barbara Tuchman, The First Salute. She is beginning this book right now, as you watch!

My favorite bus riders are young couples, cuddling together as if before a fireplace, the woman resting her braided hair on the young man's khaki-clad shoulder.

You gaze back at the Barbara Tuchman reader. Now she's paged to the back of the book, and is examining a map of coastal Maryland. What is The First Salute about? (I just Googled it—it's the story of the American Revolution, focusing on the role played by the Netherlands.)

Buses don't exactly seem to be moving. If you sit on an aisle seat and close your eyes, you feel like you're sitting in a large vibrating sphere. Greyhound's memorable slogan "Leave the Driving to Us" conveys the mystical passivity of bus travel.

In a sense, time doesn't exist on a bus. You are in suspension between two states of being—in my case, the watery, rural life of Phoenicia and the entrepreneurial chaos of the Port Authority Bus Terminal, where Clif bars are $2.49 and walkways are patrolled by camouflaged soldiers with submachine guns.

Bus drivers must have enormous bladder (and sphincter) control. They never seem to get the hiccups or have coughing fits. Often they spend nights in the lonely motels of Oneonta and Delhi. They sacrifice their personal lives to our comfort, yet we never thank them. At least, not until this essay. Yes, there's a proud statue of Ralph Kramden, the bus driver hero of "The Honeymooners" (portrayed by Jackie Gleason), outside the Port Authority, but that's a highly ironic tribute.

Have you ever noticed that women bus drivers are usually gruff, and male bus drivers rather womanly? It's as if we all unconsciously seek an androgynous figure to pilot us down the alienating highways of America.

For shorter journeys, I rely on the UCAT (Ulster County Area Transit), smaller buses with cheaper fares: $1.50 from Phoenicia to Woodstock, instead of Trailways' unspeakable $5.25. The UCAT prohibits eating (and theoretically even drinking!), also lacking a bathroom. It gathers together the Secret Conclave of Local Nondrivers: young men whose licenses have been suspended, the truly poor, inhabitants of halfway houses. At night, there are no lights; a dreamy contemplation is encouraged.

So sell your car! Join the Secret Conclave of Nondrivers! Help save 37 metric tons of carbon emissions per year (according to the Trailways website)!