Almost seven years ago, one of New York's largest private developers, AVR Realty, announced that it had secured $1.2 million in state funding for a one-mile walkway paralleling the Hudson River in Kingston. The walkway, which was named the Hudson Landing Promenade, was pitched as a public good, but it doubled as a lifestyle amenity for a 1,600-unit, mixed-use development AVR had proposed for a site along the riverfront spanning East Kingston and the Town of Ulster (or, as AVR put it in the proposal, "a transformational project for the municipalities and the Hudson Valley Region," emphases not mine).

"It's all part of making Kingston and the county an intermodal, interconnected network of trails, which will literally result in people wanting to [make] Kingston a destination to live and work," said then Kingston Mayor Shayne Gallo.

But the promenade was just about the only thing most community members supported about the Hudson Landing project, which never got off the ground, despite being approved after a lengthy review. Among other organizations, Scenic Hudson took an active role in that process, trying to ensure that the site would be developed in a way that would account for environmental, recreational, and quality-of-life considerations. When it became clear, after years of neglect and lack of funds, that AVR Realty would not be developing the site after all, the Scenic Hudson Land Trust seized the opportunity to buy it.

The property itself is spectacular: a 508-acre chunk of forested land just north of the Hutton Brickyards along the Hudson River. About three-quarters of it is in Kingston; the rest is in the Town of Ulster. It was formerly an industrial site, with a cement mine and processing facility, but for years it has functioned as an illicit recreation site for birders, hikers, graffiti artists, and ATV riders. It has some 260 acres of woodlands, 37 acres of wetlands, more than a mile of Hudson River access, a cliff and ridge line, and industrial relics from the cement works.

Scenic Hudson's route to ownership was no walk in the park, either. According to Steve Rosenberg, executive director of the Scenic Hudson Land Trust, the group engaged in a lengthy period of discussion and negotiation with the developer before securing the rights to purchase the property last spring. It was ultimately acquired by Quarry Waters, LLC, an affiliate of the Scenic Hudson Land Trust, in a deal that wasn't finalized until October, in part due to the "complex history and nature of the property," Rosenberg says. Before AVR Realty purchased it, in 2005, the site was owned by Tilcon Minerals, a construction materials company. From the mid 1950s until 1985, Hudson Valley Cement operated a cement facility on the site; prior to that, it supported brickworks and ice harvesting. That industrial history necessitated a lengthy due diligence process for Scenic Hudson, which included checking the property for hazardous waste.

Scenic Hudson purchased the property, which has an assessed value of $5.1 million, for an undisclosed sum. According to previous reporting, the prior owners were paying approximately $66,000 annually in property taxes to the City of Kingston, a sum that Mayor Steve Noble has said will be made up by economic activity resulting from the revitalized preserve.

The organization currently has a plan before the Kingston planning board to turn the 1.3-mile segment that had been slated for the Hudson Landing promenade into a section of the Empire State Trail, the continuous trail route proposed by Governor Cuomo that will stretch 750 miles from Manhattan to Lake Champlain and over to Buffalo, which is scheduled to be completed in 2020. That will be the first step in a phased approach to opening a park at the site, though Rosenberg notes that due to the property's size, use history, and the fact that it lies in multiple municipal jurisdictions, determining the next steps requires "ongoing discussion" rather than a question-asked, question-answered approach.

"There are 'no-regrets' improvements that anyone would want to undertake, starting with the Empire State Trail and passive hiking access on the western side of the property, which people already use," Rosenberg says. "It's the kind of place that evokes an endless list of creative ideas about how it can be used, but it's premature to head in any particular direction."

The project builds off previous work Scenic Hudson has done in Kingston, which includes helping acquire the site for the Hudson River Maritime Museum, providing financial support for the solar-powered Solaris boat, and partnering with Wild Earth to turn the Juniper Flats Preserve into an outdoor classroom for local schoolchildren. Scenic Hudson calls this project its "most ambitious," in the mold of its previous Hudson waterfront redevelopments at Long Dock Park in Beacon, RiverWalk Park in Tarrytown, and Scenic Hudson Park at Peekskill Landing.

"We think of this in the context of those other transformational projects," Rosenberg says, but those projects were much smaller. "The scale, complexity, and the time and cost involved in making this property what it can be to serve the public is by any measure significantly greater." 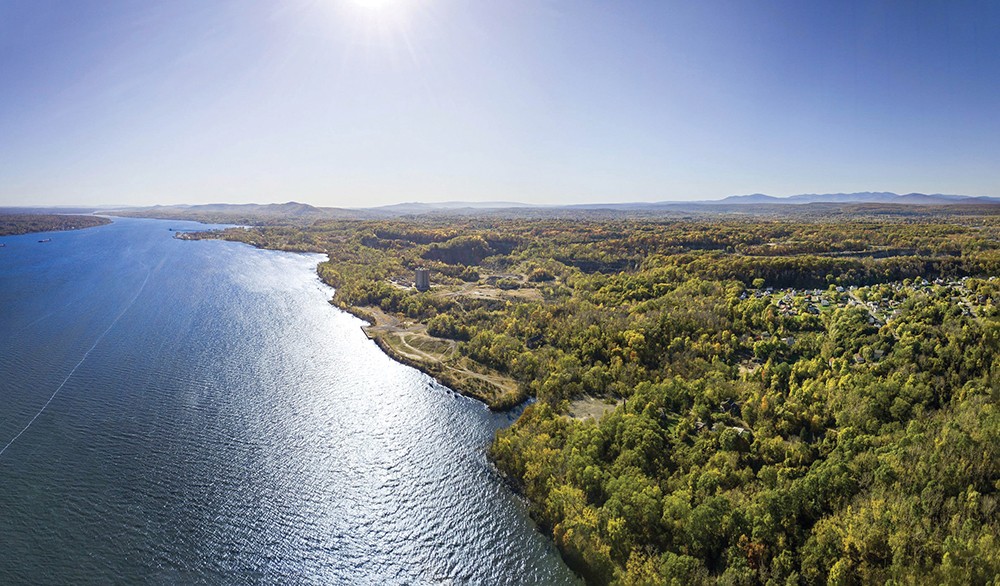 To discuss preliminary plans for the property, Rosenberg notes that Scenic Hudson has met with landscape architects and master planners (whose names he won't disclose, though the press release quotes Kate Orff, the MacArthur-winning founder of award-winning landscape architecture and urban design studio SCAPE). Scenic Hudson has also consulted with the Kingston Land Trust; the two organizations have previously partnered on the Pine Street African Burial Ground project.

"The Kingston Land Trust is very pleased about the protection of this property because of its incredible environmental, historical, and recreational value so close to the urban and residential areas we serve," KLT executive director Julia Farr wrote in an email. "As a partner with the City of Kingston and Ulster County on the Kingston Greenline initiative, we are also involved with the development of the Greenline/Empire State Trail section that runs through this site."

A State Park to be Named Later

But further efforts to sound out the community are on hold for now, because it seems likely that the property instead will be sold to the state to be developed into a state park. In January, Kingston Mayor Noble said that the land would be purchased with money from the $3 billion Restore Mother Nature bond act, which Gov. Cuomo announced during his State of the State address and which requires voter approval come November.

To Rosenberg, there are clear benefits to working with the state. "It can bring resources to the table that we in the community otherwise would be much more challenged to generate," he says. Scenic Hudson would remain in an advisory role, helping bring public access to the park and working with the state to generate educational opportunities around the restoration and historic uses.

"The project and property doesn't lend itself to setting short-term deadlines, but we're working on getting it right to arrive at the long-term vision," Rosenberg says. "But just the fact of having a 508-acre site like this, most of which is within city limits, on the Hudson River, offering this diversity of landscape types and experiences—that sets it apart from any other park along the Hudson between New York City and the Capital District."