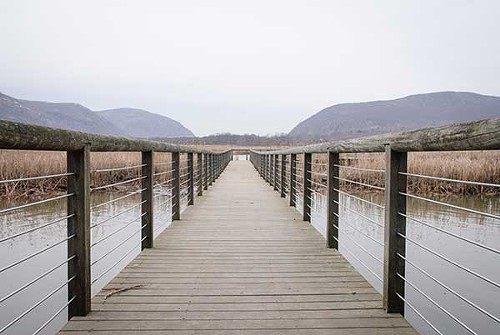 Scenic Hudson hosts its first Pitch in for Parks event for the season on Thursday, April 4, which will run on the first Thursday of every month through October. The idea is to get outside for a couple of hours after the work day, enjoy the nice weather, and chip in to maintain the region's beautiful outdoor spaces—and there's no shortage of them in the Hudson Valley. Whether you're pitching in or simply strolling through, here are our top five picks for park season:

Poets' Walk Park
Channel your inner Wordsworth on the shady, streamside path at Poets' Walk Park in Red Hook, a Scenic Hudson park that was originally designed by the German-born landscape architect Hans Jacob Ehlers in 1849. The walkway has inspired centuries of poets, and it is rumored to be the site where Washington Irving came up with the idea for "Rip Van Winkle" while gazing at the view of the Catskill Mountains. A prominent feature of the 120 acres of rolling meadows across from Bard College is its rustic cedar pavilions, which Ehlers originally constructed with stands of foliage and stone walls. The two miles of trails through woods and open fields are dog friendly, and the park is buffered on all sides by 780 acres of private lands, ensuring the landscape's protection from future development.

Nature Preserve Park
The beautifully maintained Constitution Marsh Audubon Center and Sanctuary in Cold Spring offers leisurely trails for exploring the tranquil natural space. In under two miles, you can stroll past the beautiful Indian Brook Falls, sit on a homemade bench with a view of the Hudson River and West Point on the other side, and wander out onto the cattail-wreathed Constitution Marsh boardwalk. The center also offers internships and education programs for kids, including Eagles on the Hudson, bird, fish, and aquatic programs, and canoe trips in the summer. This is a great opportunity to learn about nature while enjoying it.

Shawangunk Park
Often overlooked for the Shawangunk's more popular preserves, like Minnewaska and Mohonk, Sam's Point Preserve offers some of the most interesting natural communities of the beloved 'Gunks. South of Mohonk and Minnewaska, Sam's Point is perched atop the highest point of the ridge in Cragsmoor. Its 5,400 acres is home to nearly 40 rare plant and animal species, including more than 200 species of migratory and nesting birds and one of the best examples of ridgetop dwarf pine barrens in the world. The preserve's rare communities include ice caves and canyons, and at 180 feet, Verkeerder Kill Falls is the highest waterfall of the Shawangunks. Make sure to go back in late summer when the blueberry and huckleberry bushes are in bloom.

Linear Park
The Wallkill Valley Rail Trail is a 23.7-mile stretch that runs along the former Wallkill Valley Railroad corridor from Gardiner to Rosendale. In addition to linking some of Ulster County's most vibrant towns, the rail trail offers stunning, easily accessible views. Whether running, walking, or biking, you can see the profile of the Shawangunk Ridge for a good length of the Gardiner section. After passing through an apple orchard, you'll eventually reach the Plattekill Creek Gorge, which abuts the end of Plains Road in New Paltz. The view from the wooden bridge at the gorge is a photographer's dream—a flat green pasture spotted with grazing cows is divided by a calm, trickling creek, and when the sun sets behind the ridge in the background, the sky is cast with brilliant streaks of color, changing from bright, fiery reds to inky purples and pinks. Pack a picnic lunch and take a break at the bridge overlooking the river just off of the Springtown Road crossing, which is just a couple of miles further from the gorge.

“Dracula” at Widow Jane Mine