It is illegal to drive under the influence of cannabis, to consume cannabis while driving, and for passengers in a vehicle to consume cannabis—and all of that will remain illegal once New York's commercial cannabis market begins operating, sometime in the yet-to-be-determined future.

But what does it mean to be under the influence of cannabis in the first place? For alcohol, it's very simple. In New York, impairment is established at a blood alcohol concentration (BAC) of more than .05 percent, and intoxication at a BAC of .08 percent or higher. But for cannabis, there are no equivalent blood-concentration levels.

"New York State has yet to establish such measurable levels of THC reflective of impairment or intoxication," says Saugerties Police Chief Joseph Sinagra. "There currently is no scientific evidence that quantifies the nanograms per milliliter of THC in one's system that produces impairment. We also lack any [reliable] roadside testing devices or way to establish the presence of marijuana like we have for alcohol, such as an Alco-Sensor."

That leaves the job of detecting cannabis inhibition up to drug recognition experts, or DREs. According to New York State Office of Cannabis Management spokesperson Freeman Klopott, under the Marijuana Regulation and Taxation Act (MRTA) enacted last March, New York will direct a portion of cannabis revenues to support training police officers as DREs, using enhanced field-testing techniques to determine if a driver is operating a vehicle under the influence, to rule out medical conditions that may cause erratic driving, and to classify the category of substances an individual is specifically impaired by.

In order words, impairment-by-alcohol is subject to machine testing, while proving cannabis intoxication comes down to people. But cannabis activist and attorney David Holland is optimistic about the practice of using DREs to determine cannabis influence.

"The creation of DREs is good to get more accurate assessments of whether or not someone is under the influence," says Holland, who is the executive director of the New York chapter of the National Organization for Reform of Marijuana Laws (NORML) as well as the New York City and Hudson Valley Cannabis Industry Associations.

Training police to make informed, if ultimately subjective, decisions about a person's level of cannabis intoxication is not the ideal scenario for many people. But Holland's optimism comes in part from the fact that there are few other options. Cannabis blood tests usually measure usage within the past 30 days, with the latest tests capable of detecting consumption within 12 hours. New technologies are still being tested, but the fact remains unchanged: Cannabis and its effects on the body are fundamentally different from alcohol, complicating the development of a reliable cannabis breathalyzer.


THC, the active ingredient in cannabis, is a fat-soluble compound, meaning it binds to fat molecules in the body. That's in contrast to alcohol, which is quickly absorbed by the body: Around 20 percent of the alcohol a person drinks is taken into the bloodstream through the stomach, while the rest is absorbed by the small intestines. Most attempts at a cannabis breathalyzer fail to acknowledge the differences between the two substances. 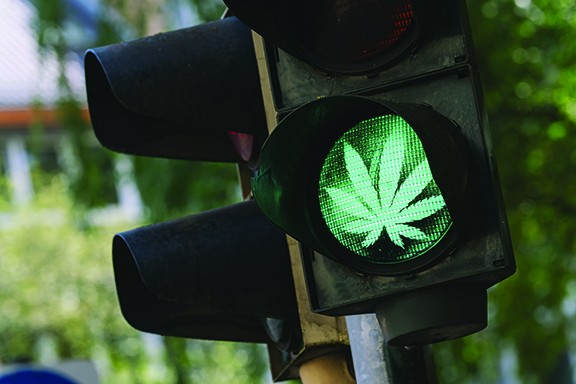 Despite this, the MRTA directs funds to the Governor's Traffic Safety Committee to work with state agencies and localities "to research emerging tools that could be used to accurately detect whether a driver is under the influence of cannabis." And companies in the private sector are also working to develop cannabis breathalyzer technology. EPOCH is one of the latest developments, a cutting-edge rapid THC detector that utilizes an optical sensor to scan saliva samples.

EPOCH can detect THC levels above one nanogram per milliliter of saliva within a 12-hour consumption window. In early trials, it has returned zero false positives—though the sample sizes have been small. That's one reason why it's not yet ready to hit the streets. Another is that its inventors say more trials are needed to establish "baseline difference between frequent and occasional marijuana users."

In the meantime, it will remain difficult to establish driving impairment based solely on the consumption of cannabis, says Sinagra. Holland agrees: "It's a tough law to prove right now if you're a prosecutor."

This on-the-ground uncertainty leaves potential room for the law to be misapplied or misinterpreted. Randall Inniss, an attorney and former New York State Trooper, believes that "it will be easier to get arrested for a misdemeanor-level crime while under the influence of cannabis under New York State law than with alcohol while operating a motor vehicle, which has the higher 'intoxication' standard."

One significant change the MRTA did make to existing law is that odor can no longer establish probable cause when police are conducting a traffic stop. That practice had long been used disproportionately against people of color, who were often forced to endure searches—and worse—based on the alleged odor of burned cannabis.


Banning odor as probable cause is one of many efforts in the MRTA to rectify decades of racial injustice wrought by the War on Drugs. According to a 2020 analysis by the American Civil Liberties Union, Black people were more likely to be arrested for marijuana possession in every state in the US—in some states, 10 times as likely. That disparity increases at the county level—in some counties, Black people are 20, 30, 40, or even 50 times more likely to be arrested than white people. The MRTA needed to both atone for the past and plan for the future.

"In the past, [this has been] a means to invade people's privacy and question them, whether that's driving or on foot," Holland says. Now "it should change a little bit of how the engagement between citizens and law enforcement goes. But I can't say that it will stop law enforcement from pulling over cars because they look suspicious."

"Unfortunately, there is always the potential for racial discrimination in enforcement, but New York's cannabis law is at least intended to make it harder by raising the standard for probable cause to search a vehicle," says Andrew Schriever, an attorney who serves on the board of the New York City and Hudson Valley Cannabis Industry Associations. "The law is not a cure-all, but it is a positive step to reduce the potential for race-based enforcement."

Much of how cannabis DUIs will operate in a legalized marketplace is still to be determined by the Office of Cannabis Management, along with many other aspects of the legal rollout. In the meantime, the lack of clarity is the biggest concern expressed by elected officials in municipal-level debates about opting in or out of allowing cannabis sales and consumption.

Sinagra has been one of the few law enforcement officials who, while maybe not pro-marijuana, has worked with his constituency to prepare it for legal weed. But the town of Saugerties still opted out of allowing retail sales and lounges. Town board member Michael Ivino cast the deciding vote after expressing concern about the lack of information available about requirements that would be placed on municipalities that did not opt out. "I encourage anybody who wants [to not opt out] to get in their car and drive home without the lights on, because that's what New York's doing to us right now," he said at the meeting.


One thing is clear: Police tend not to favor the MRTA. What will that mean for the number of DUIs in New York State? When dispensaries and consumption lounges open up, will it be absolute mania or will legalization lead to an increase in responsibility?

"In every state where marijuana has been legalized, you've seen an increase of traffic accidents and traffic fatalities. It's just fact," says Patrick Phelan of the New York State Association of Chiefs of Police. Sinagra's view is more nuanced. "We will more than likely experience a small increase in DUI-related crashes, then the numbers will return to their historical levels."

This is partially borne out in data from other states that have legalized marijuana: According to the AAA Institute for Traffic Safety, the ratio of drivers involved in fatal car crashes who tested positive for cannabis in Washington State doubled after its recreational market opened, from 9 percent to 18 percent.

In Colorado, which legalized recreational use in 2012, the number of fatal crashes went from a total of 18 in 2013 to 77 by 2016, according to the National Conference of State Legislatures. The following year, Colorado State Patrol then reported a decrease in cannabis-only DUIs, from 232 between January to March of 2016 to 155 people over the same period in 2017. But last year, cannabis DUIs spiked 48 percent.

The good news is that there does not seem to be a concomitant rise in fatal traffic accidents in places that have ended cannabis prohibition. A team of researchers at Florida Polytechnic University examined the relationship between traffic fatalities and statewide policies legalizing marijuana over a 35-year period from 1985 to 2019. They identified no significant changes in trends in fatal crashes following the enactment of recreational marijuana laws, and in fact reported a decrease in fatal traffic accidents following the passage of statewide medical cannabis access laws, though they admit that things might change as more states legalize.

Cannabis DUIs will be a part of the future—that much is apparent. Who will actually get them, and how they'll be tested, are questions still to be answered.

Cannabis Edibles: A Tasty Route to a Magical Experience Sponsored