After months of anticipation, Moonburger opened in Kingston in mid-October. It’s a drive-through burger joint (serving only plant-based burgers) on a dead-end lane between two QuickCheks. Think of it as the Impossible Burger version of Shake Shack: The menu is small (burgers, fries, shake, apple for dessert), the branding is tight, and it feels like the prototype for a fast-food chain. I wouldn’t be surprised if I saw a Moonburger at Yankee Stadium or LaGuardia Airport in five years. Moonburger feels inevitable.

What does inevitability taste like? I wanted to find out. So on a rainy Tuesday afternoon earlier this week I took an order from my colleagues and drove crosstown to rustle up a Moonburger lunch. Here’s my recounting of the Moonburger experience.

At 12:05pm, I turn off Washington Avenue and drive past 15 cars waiting along the side of the road on Powell’s Lane. At the end of the narrow street, I make a tight three-point turn and get in line.

Ten minutes in, the line hasn’t moved at all. The car ahead of me just pulls out and drives away. I inch forward. As I’m on assignment, the waiting doesn’t bother me, but I can’t say the same for all my comrades in line. A few minutes later, the car behind me also bails out, passing three cars pulling in to get in line. A recent article in the Freeman stated that people had waited in line as long as 90 minutes.

The line of cars stretches along a mostly deserted stretch of road with tall weeds on either side. There’s a driveway on my right with signs posted on either side that read: “Please do not block the driveway. Thank you!” When a dump truck arrives, I am blocking the driveway. The expression on the truck driver’s face is more exasperated than pissed-off. The car in front of me inches up and I pull forward and over into the weeds, feebly waving a note of apology.

The person behind Moonburger is Jeremy Robinson-Leon, a Vassar grad and public relations executive who moved to Kingston during the pandemic. He’s told various local outlets that plant-based burgers are where it’s at in 2021 and that his burgers were created with beef eaters in mind—to change those minds about plant-based burgers. Not that Robinson-Leon is a vegan crusader (the cheeseburgers are made with cow cheese); rather, he’s a shrewd entrepreneur harnessing the zeitgeist—and doing his bit to save the planet by not selling industrially farmed beef. Robinson-Leon’s branding and marketing is as deliberate and careful as his choice of heavy-hitting culinary advisers: food personality and cookbook author Alison Roman, Bon Appetit editor at large AmielStanek, and former Shake Shack director Anoop Pillarisetti.

Another car behind me in line bails. It’s been 15 minutes since I’ve gotten in line and I’ve moved maybe four car lengths. I decide to see what people are saying about Moonburger on Yelp. As of October 26, there were only three, mostly positive reviews—“burgers were outstanding,” “Oh wow this place is fantastic”—though Jill B. from Palenville is unimpressed with the milkshake, which is made with oat milk and chocolate ganache. “One sip of their Brownie Batter Shake and...BLECH! The first tiny sweet hint of good chocolate was blasted with a grassy, grain, wheat taste that was disgusting! It was like eating a chocolate covered hay bale. I've never had such an instant disliking for anything resembling chocolate….this choco-grain ‘treat’ is perfect for aversion therapy. Not only have I not ordered a shake since, but I've stayed away from that entire part of town.”

Another five minutes go by and I am close enough to Moonburger that I can see two dudes standing under a pop-up tent in the driving rain, holding the corners down as the wind attempts to send the tent aloft. It’s unclear what they’re doing, as they are not taking customer orders, just observing the proceedings.

Minutes later, the wind has picked up and the tent is broken down and the men retreat into Moonburger. It’s 12:27. Two more cars behind me bail. A Moonburger paradox occurs to me: Is fast food still fast food if it’s not fast?

After 25 minutes, I have finally reached the edge of the Moonburger property, where the faded street pavement meets the fresh black tarmac of the parking lot. The boxy, modernist Moonburger façade is built on top of a former drive-through scoop shop, the Ice Cream Castle, which had turrets and a crenellated roofline. Moonburger looks like two buildings bolted together: in front, a corrugated metal facade painted white like two shipping containers stood on end with the Moonburger logo rendered in approachable, pillowy cursive; in back, a two-story wooden building with a modern exterior veneer like Starbucks. The chimney, painted black, features a mural of a rocketship with a porthole. Inside the porthole, a hand holds a hamburger—from a distance, it looked like the head of a dinosaur.

From the office, my coworker Margot texts: “burgers?” It’s been nearly an hour since I left on this lunch mission. When I finally pull up, the dude at the drive-up window apologizes for the wait. “There was some confusion and a back-up of orders,” he says. I tell him I’m in no rush.

As my order is handed to me, I see three cars simultaneously exit the waiting line. In the 45 minutes I’ve been waiting, it seems like for every three cars that joined the line, at least one bailed before placing an order. 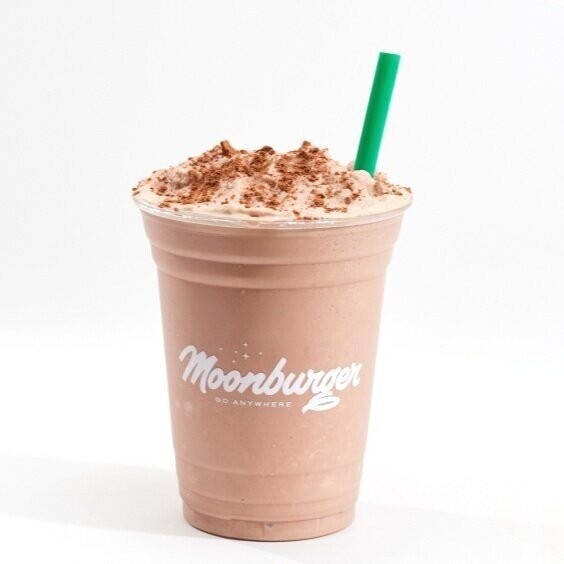 Burgers secured, I turn around and head back to the office. As I’m a little peckish, I poke around in the bag of fries and grab some. Texturally, the fries are somewhere between the uber-crisp McDonald’s standard and the more greasy/soggy Five Guys version. (Both styles have winning qualities.) It’s a good difference to split, and size-wise, Moonburger fries fall between the large shoestring version at McDonald’s and the oversize, potato-forward fries at Five Guys—also a smart choice. The hot fries are tossed with a seasoning that tastes (delightfully) like Old Bay and Lawry’s had a spice baby. With the moniker “hot fries,” I was expecting something legit spicy—I prefer hot sauce to ketchup on my fries—but there was a prickle of heat and the seasoning added a worthwhile dimension. (There’s also a melted cheese sauce for the fries, which I forgot to order.)

Back at the office, we spread out our bounty and dig in. The packaging of the burgers was on point, the paper wrappers cleverly designed with icons of burgers and fries and shakes and planets and astronauts like bespoke wallpaper for a fast food junkie. As for the burgers themselves: They’re built in a Martin’s potato roll, which is a real treat for me. The thing about a Martin’s roll is that it easily falls apart when soggy or overstuffed. Some might say this is a negative, but in the case of Moonburger, my burger collapses in a most pleasing way, flattening out like the event horizon of a dying star as I apply a two-handed death grip to it. If I put it down, it’s gonna be fork-and-knife time.

From a taste perspective, the first thing I notice is pickles. Lots of pickles! I love this, but be warned if pickles aren’t your thing. Then there’s the two types of onions—sautéed and fried. This feels like a genuine, useful innovation to me (although undoubtedly it’s been done before, like everything else). The caramelization of the sautéed onions is a tangy treat; the fried onions add a crunchy texture that’s unexpected in a burger, akin to why some folks like potato chips on their sandwich. Well done, Moonburger.

There’s special sauce applied as well, which my colleague Marie neatly described as “that sauce my mom used to make by mixing ketchup and mustard...although this is closer to remoulade.” There’s a desultory slice of iceburg lettuce on the bottom of the ingredient stack that provides a light crunch, but it’s largely lost. And no tomato, which isn’t missed.

As for the Impossible Burger, or whatever variant the Moonburger team has created: If Robinson-Leon’s goal is to create a plant-based burger that carnivores would get behind, then he’s succeeded. The patty is crisp and pliant in the same manner as beef and has a potent umami profile. (All that’s lacking is the satisfaction of dominion over other creatures, for those whose food tastes better that way.) And for those seeking to satisfy their conscience as well as their appetite, Moonburger checks both boxes.

In the shake department, there's a single option: Brownie Batter, which is low-key vegan, made with oat milk and house-made chocolate ganache. Texturally, it's a little on the gritty side, but it tastes like someone whipped chocolate milk into a frozen frenzy. If you grew up dipping your fries in your Wendy's Frosty, this shake lends itself well to that treatment. And, like all cold bevvies worth their ice, you'll be in danger of brain freeze if you slurp this shake too fast.

Moonburger is making interesting, tasty plant-based burgers at a fair price. I’m just not sure it can be called fast food with the current wait times. I suspect that will change as the hype dies down and Moonburger works out its opening week kinks. My suggestion is to get on line anyway and just save up a favorite podcast or two for the wait.