To the Edge and Beyond | Weekly | Hudson Valley | Chronogram Magazine

To the Edge and Beyond 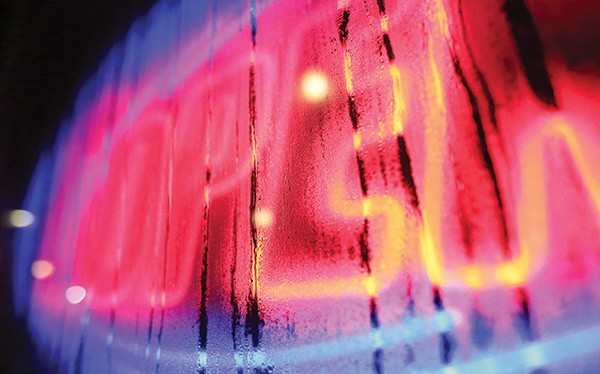 In late April, the planets aligned in a grand cross pattern. Mars retrograde, Jupiter, Uranus, and Pluto came into perfect focus, an X pattern with the Earth in the middle. This was a peak moment of the Uranus-Pluto square—our era-defining aspect, the one that spans from 2012 through 2015 with several years tacked onto either side. Fast-moving, personality-driven planets like Mars getting mixed up with slow movers such as Uranus and Pluto can bring otherwise hidden events associated with the main aspect out to the forefront of our awareness.

So with some hindsight, the question is, what did you notice? The grand cross was followed by an eclipse of the Sun on April 29. Mars retrograde will end May 19, when Mars stations direct. Then Mars will take another two months to work its way across Libra and ingress Scorpio.

You could call this a "get serious" moment. Getting serious, however, is usually the thing we like to do the very least, dreaming away here in our la-la land of adventure films, foamy-milky-sugar-fluff beverages, iPods, and iPhones, dreaming away and where even "progressive" television programs consist of one-third commercials that verge on psychotic fantasies.

Americans live in a country where adults are fed dietary fiber in "yummy delicious" gumdrops, and where 4.5 million guns are purchased every year.

In the United States there are 90 guns for every 100 people and no obvious connection between that and the more than 33,000 Americans killed by people using guns (including homicide, suicide, and accidental death) in the first year after the Newtown mass shooting. Only a third of them were reported by the media.

I've said a few times that one of the most serious problems of Western civilization is our seeming inability to connect cause and effect. Cause and effect is the Law of Karma, and the failure to make the connection can breed karma rapidly. And that is exactly—exactly, precisely—what our society does. We breed karma faster than it's possible to get out of it, by any normal means not requiring a profound spiritual connection or help from friendly extraterrestrials good at cleaning up nuclear waste.

Meanwhile, many people want to wake up, and try to do so diligently. Yet the first thing anyone on a path of awakening is likely to discover is just how twisted their society is, and how driven by dark motives. That fact is not exactly encouragement for becoming conscious. Anyone with a shred of intelligence knows that to approach any aspect of the global crisis, more is demanded than their personal purity; we have to do more than what we deem to be "our part."

Solving problems, whether personal or on a scale larger than one's own immediate situation, involves becoming aware of the nature of the issue. This alone seems to be an obstacle—many global problems are extremely complex, or they seem that way. Meanwhile, one's personal circumstances can be more than enough to bear. For anyone sensitive who feels the pull toward considering what we must solve to protect future generations, the pressure can be overwhelming.

Even trying to approach or resolve a relatively simple problem within a community can lead to total frustration. This is often connected to the personalities who are invested in the dysfunction, the underlying politics, or encountering those who are committed to things staying the way they are—often for reasons that are entirely opaque.

On a larger scale, a 10-minute discussion of an actual global problem or the motives driving it can be enough to leave someone sobbing. For many, denial seems to be an essential survival tool. But denial doesn't do anything, and its effectiveness as a hedge wears off quickly.

The astrology we're experiencing looks like it could push anyone to the edge. That might be a psychological or an emotional edge, a limit on tolerance of a situation. This could also represent a trip to the edge of one's intelligence—that is often productive, because the edge is where you can go beyond what you knew or thought of before. It's the place to take the leap. Yet everything about the current astrology says this must be done with precision.