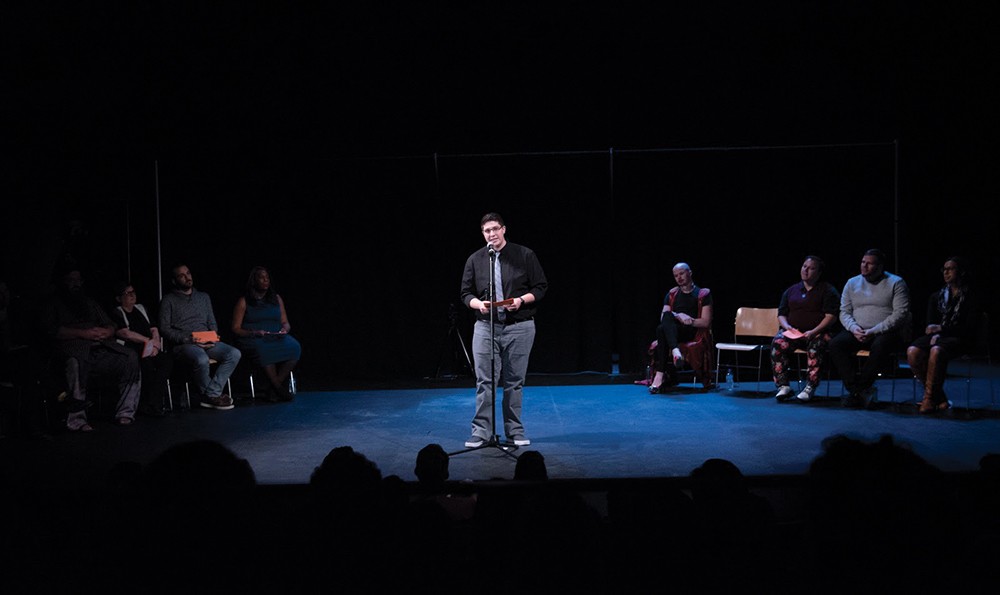 In November of last year, a cast of 10 LGBTQ storytellers from around the country, selected from a nationwide call, took part in a TMI Project true storytelling workshop led by James Lecesne, cofounder of the Trevor Project, alongside TMI Project cofounders Eva Tenuto and Julie Novak. The workshop culminated in an off-broadway production, "Life Lines: Queer Stories of Survival." A documentary about the making of  "Life Lines" will be released in 2020.

Ray Long was a featured storyteller in "Life Lines." When she joined TMI Project, she felt isolated because of the shame associated with a past suicide attempt. After performing her survival story, she was emboldened to continue to put her story to good use and share it with a national audience to inspire others who are still struggling and, ultimately, to save lives.

If you're interested in learning more about TMI Project's work or supporting the creation of radically candid true stories for social change, visit Tmiproject.org/donate2019. After making an online donation, you will receive information about the #truthordaretodonate social media campaign, a fun way to be a spark in igniting human connection through true storytelling.

I looked down at my feet as I kicked them against the brick wall underneath me. I had just moved into a house across the street from the University of Memphis. It was summer, so the campus was bare. I liked walking the empty paths at night alone. It was peaceful. It was one of the only times I enjoyed the quiet.

But, on this particular day, I found myself on top of a six-story parking garage. The summer breeze helped cut the humidity down and it felt nice. I leaned against the wall before I climbed up onto it, stood, and looked down. After about 10 minutes of feeling the breeze on my face, I decided to sit. Just for a moment.

Earlier that day, I had come home from work to my roommate giving me a hard time. They always gave me a hard time about something or another. I was never good enough for them. I moved to Memphis specifically for them but once I arrived, they cut me off from people completely and wouldn't let me leave the house. When I eventually got a job, they let up a bit, but not much. I still needed to check in every day. All the time. I hated it.

I also hated being alone. Except for that night on the wall. Then, all I wanted was to be alone. For the first time in a long time, my brain was silent. That never happened.

"Maybe that just goes to show that my decision is the right one," I thought as the calm breeze brushed up against my skin. For the first time since I arrived in Memphis, I felt at peace.

I pulled out my phone to text my mom. I missed her more than anything. I knew I hurt her when I impulsively moved here with no plan in place. I felt bad about it.

And, I felt bad that I'd never get to hug her again and tell her I'm sorry.

"I hope she forgives me for what I'm about to do and doesn't blame herself. It's not her fault I'm here. I'm the one that put myself here," I thought as I unlocked my phone.

A web page appeared. I was surprised. The campus WiFi didn't usually reach all the way up there. Earlier, I had seen a sticker on a light pole for the Trevor Project. I love stickers. I thought the Trevor Project was a theater thing. It's not. It's a suicide lifeline for LGBTQ youth that somehow, by divine intervention, I had accidentally stumbled upon.

I laid my phone in my lap and looked out over the campus and let out a long sigh. I looked back down at the webpage and clicked the phone number. It automatically dialed and my phone prompted me: Do you want to call this number? I stared at the prompt. I didn't know, did I? I mean, I guess I did since I clicked the number. I hit yes, put the phone on speaker and set it on the wall next to me.

I don't remember much of the actual call but someone kind picked up and at some point, I asked them, "Why do I feel the way I feel?" The person on the other end simply said, "I can't answer that question."

I asked, "Is there more to this world than where I am in my life now?" Then they said something I will never forget. "You are worth more than just this moment." I remained silent.

Eventually, I pulled my legs to the other side of the wall. With my feet on the ground, I managed to whisper, "Thank you." I was surprised I could even speak. I didn't want them to know I was crying. For some reason, I wanted to seem like I'm stronger than I feel.

I hung up a few minutes later and sat on the roof for another hour. Eventually, the wind died down, the humidity increased, and it was too hot. I walked back to the house, where I found my roommate drunk, who immediately started yelling at me, asking me where I had gone and why I wasn't answering their texts and phone calls. I simply kept walking. I went to my room and locked the door.