A serpent wider than a doorway and larger than a school bus sounds like something out of a science fiction movie. But enormous vertebrae and ribs from such a creature that lived 60 million years ago were found in a northern Colombian coal mine in February 2009. Each vertebra measures approximately five inches across—roughly double that of the boa constrictor and anaconda, previously thought to be the largest snakes to have lived. Titanoboa cerrejonensis, named for its size and the discovery site, spanned at least 40 feet in length and weighed upward of a ton.
In addition to the snake’s shocking size, the discovery of the partial remains of 28 titanoboas has begun to fill in the 10-million-year historical blank after the dinosaurs’ demise. The National Wildlife Federation commissioned James Gurney to create an illustration of the animal for a Ranger Rick piece on archeological discoveries. Like his previous work in the wildly popular Dinotopia series, Titanoboa marks another ancient reptilian addition to Gurney’s collection of work. “It is always very exciting to me to try to picture things that not only has nobody not only ever seen, but maybe no one ever imagined,” says Rhinebecker Gurney, who has a background in both art and archaeology.
With a subject he could neither see nor photograph, Gurney constructed a small maquette scene from oven-hardened clay, rocks, and sticks in a Chinese food takeout container. Challenged by the the snake’s extraordinary length, he decided to show the titanoboa rising half out of the water in a death match with a crocodilian, a giant forebear of the modern crocodile. “The main purpose of my piece is to try to imagine what would otherwise just be a fairly ordinary fossil—to go from that to imagining a very dramatic moment in the life of this creature and to take us in a time machine to see what it really might have looked like,” says Gurney.
Titanoboa is currently featured in “Focus on Nature XI” at the New York State Museum in Albany. This biannual exhibit aims to show science through imagery in a way accessible to the general public. Pieces are admitted into the exhibit based on both educational and artistic merit. This year’s exhibit features 93 illustrations of plants and animals, the work of 73 regional, national, and international artists. A touchscreen panel in the exhibit allows visitors to learn more about the creatures or plants featured in pieces and the artists who created them. “Focus on Nature XI” runs through October 31. (518) 474-5877; www.nysm.nysed.gov.
Portfolio: www.jamesgurney.com 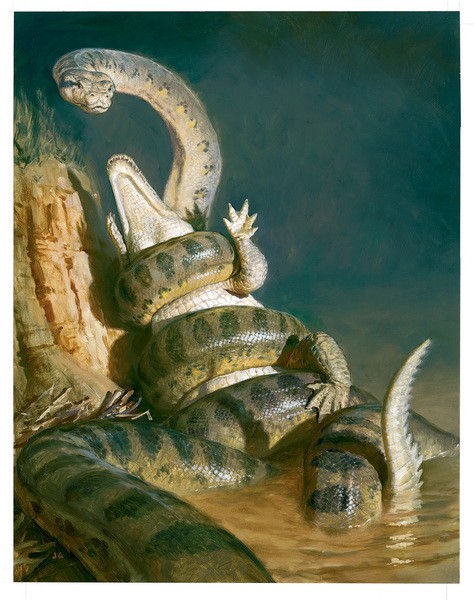