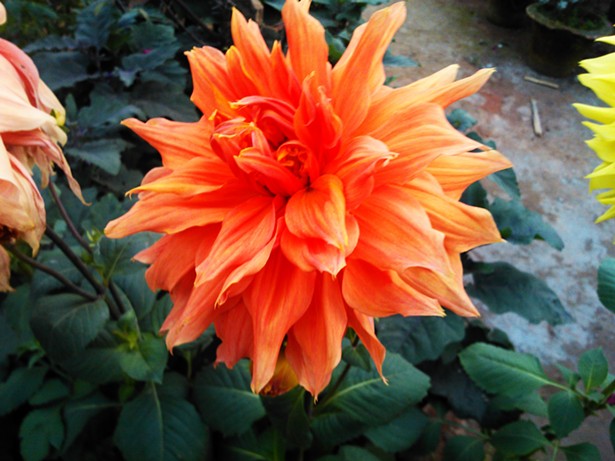 "People are afraid to grow dahlias," Tim Steinhoff says, as he gives me a tour of Germantown Blooms, his flower farm. "I think the prospect of storing dahlias in the winter is what intimidates folks most, but it shouldn't," he says. "I store mine in my basement with no special conditions."

Steinhoff calls dahlias the "tulips of late summer and fall," as they have a tulip-like range of colors and many different classes from which to choose. When he was head of horticulture at Locust Grove in Poughkeepsie, Steinhoff grew spectacular dahlias for a decade before retiring. Now he runs Germantown Blooms in Colombia County where he lives with his husband, John Kirslis. Dahlias are key components of the cut-flower bundles Steinhoff provides to his Flower CSA subscribers.

Dahlias, like potatoes, grow from swollen underground stem structures called tubers. The tubers are planted in spring, then new shoots arise from the "eye" (bud) at the end of each tuber as the stored carbohydrates and other nutrients nourish the new growth. In summer, the tuber's reserves get used up, leaving just a husk, and new tubers are formed. Those new tubers are dug up in late fall and overwintered indoors, as dahlias originate mostly from northern Mexico and thus are "nearly tropical in their preferences," says Steinhoff. As you may be able to guess by their floral morphology, dahlias are members of the daisy family (Asteraceae).

What's the first thing someone new to growing dahlias needs to know?

Tim Steinhoff: Dahlias must have full sun. Some full-sun plants like or tolerate afternoon shade, but because of how they evolved in the high plains of Mexico, dahlias need sun all day long. Second, although they are adaptable to different kinds of soil, they need good drainage or else the tubers will rot. You could grow dahlias on a slope but not on low land.

Are there certain classes of dahlias that are easier to grow than others?

Within each class there are some varieties that are easier to grow than others. Dahlias are separated into classes by flower type and/or size. For instance, there are the cactus-type and waterlily-type dahlias. There are the "AA" size class of dahlias, whose flowers are 10-plus inches across, down to the "M" size class of dahlias, whose blooms are under 4 inches in diameter. The American Dahlia Society has an excellent summary of dahlia forms.

As a class, I'm partial to the collarette-type dahlias. These are small-to-medium flowers with a ring of flat, petal-like flowers surrounding the central disc of tiny tubular flowers—much like daisies. However, the collarette dahlia flowers have the extra charm of an inner set of petaloids (petal-like structures) that form a "collar" around the disc. The collar is frequently a different color than the flat outer petals, providing an interesting contrast. Not all collarettes are good for cutting, but I love them regardless.

Among the varieties I recommend to folks who are trying dahlias for the first time is David Howard, which is a toasty orange color with a brown button in the center on dark purple-bronze foliage. It's got very sturdy stems, so it doesn't have to be rigidly staked, and it can be grown in containers as well as in garden beds. Bishop's Children is another easy-to-grow dahlia with dark foliage, only this one can have burnt orange, deep plum, blood red, or even deep pink flowers, depending on the seedling variability. Bishop's Children is a literal descendant of arguably the world's most popular dahlia, Bishop of Llandaff, which has a scarlet red flower on nearly black foliage; both bloom prolifically in late summer right up to the first hard frost.

Can you walk us through the seasonal calendar for growing dahlias?

Here in the Hudson Valley, I plant dahlia tubers around May 1. I plant them 4 inches deep and refrain from watering until I see green shoots emerge above ground, usually by mid-May. (It's very important not to water them at planting, because it could cause the tubers to rot.) Most dahlias like to be staked; I put the stake in at planting time when I can see exactly where the tubers are. To promote maximum dahlia stem sturdiness, especially for the varieties with the larger blooms, my former Locust Grove colleague Susan MacAvery liked to plant the tubers 6 inches deep and then gradually fill the soil in.

The emergence of green growth is also my cue to fertilize; I scratch in a tablespoon of granular fertilizer on the surface around each plant. Generally, dahlias will benefit from 5-10-5 or another fertilizer (organic or synthetic) with a higher middle number, the "P" (potassium), because that macronutrient promotes bloom. If you use a fertilizer with a high first number, the "N" (nitrogen), you promote vegetative growth at the expense of flowers. I don't recommend liquid fertilizers for dahlias, because they push growth too fast and they are almost all too high in nitrogen.

As soon as the stems are about five inches tall, I pinch them above the second whorl of leaves to promote bushier plants with stronger side shoots for cutting. I mulch the plants once they're vigorously growing. You can mulch with newspaper topped with a well-rotted organic material (like leaf mulch), but don't use cardboard, because it can hold too much moisture and rot the tubers. Grooming dahlias weekly is important; remove spent flowers to put energy into new flower buds but also to reduce pathogens.

Dahlias bloom their hearts out from late August all the way through to hard frost. Let the plants freeze, leave them in the ground for 10 days, then dig them up and cut the dead top foliage off. (One year I was out of town at the 10-day mark and didn't get to dig them until two weeks after that; they were fine.) Interestingly, the size of the tubers doesn't necessarily correlate with the size of the plants/flowers. Some large flowers have small tubers and vice versa.

I urge folks: label your tubers as you dig them up, even if you think you will remember. One year [Steinhoff chuckles] I thought I had saved 15 different kinds of dahlias, but it turned out I had only two! I recommend putting a nametag on a string around each tuber and then putting them in bags or newspaper. I store mine in my basement, where it's about 60 degrees in the winter—and the tubers do fine. Some people store tubers in peat or vermiculite; I don't, because I want to be able to easily inspect the tubers in the winter. I cull any rotting ones and also see which ones are producing eyes. There will always be some tubers that don't produce viable eyes, and these have to be chucked.

Any other tips or stories?

You don't have to grow dahlias in rows like soldiers; you can grow them in blocks and wedges like I do. They're just as easy to care for and cut from.

At Locust Grove, we grew a "living wall" of a species (wild) dahlia called Dahlia sorensenii that grew 7 feet tall with beautiful single pink flowers. There are dahlias like this one that make bold, structural landscape plants.

If you get into growing dahlia from seed, producing seedlings in time for the May 1 planting, you will get flowers and tubers the very first season.