No-Till For the Home Gardener 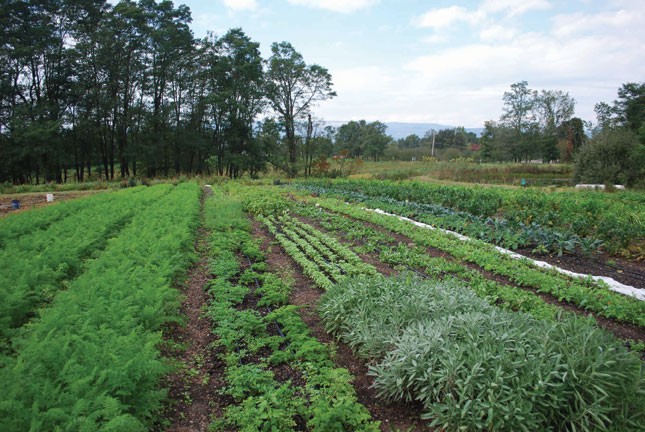 For a few years in my early 20s, I ran a small organic truck farm operation. I sunk $2,000 into a fancy rototiller, because the gospel of tillage had been drilled into me by advertising and convention. It was a beautiful royal blue tiller, and it was a joy to operate. The soil looked so nice and fluffy after I tilled, and all that organic matter just kind of melted into the soil particles like magic. I get why people are wedded to their rototillers.
But tillage has its downsides. Tillage stirs up weed seeds, it can break down your soil structure, it can contribute to erosion, and it releases carbon dioxide from the soil (not to mention, from the tiller) into the atmosphere. (Soil, like trees, “sequesters” carbon if left alone.) Land-grant schools like the Agriculture College at Cornell conduct research on conventional tillage versus conservation tillage. For a lot of farmers, reduced tillage, a form of conservation tillage, is proving to be optimum. But for home gardeners, no-till, the ultimate form of conservation tillage, is a really intriguing—and practical—possibility.

Jay and Polly Armour of Four Winds Farm in Gardiner practice no-till exclusively on the four acres of vegetables they grow on their 24-acre certified organic farm. The vegetable beds have been formed permanently over the last 17 years without the use of expensive and polluting equipment. Their weed pressure has gone so far down that the Armours spend much more time in the summer harvesting than dealing with weeds. Some weed seeds, like those of dandelion and thistle, can blow in, but the farm’s raised beds are so friable and loose that what few weeds pop up can be pulled out with little effort.

Jay Armour advises home gardeners who want to get into no-till to start with a small area and expand each year. He says, “You can overwhelm yourself if you to start with too big an area because there will be weeds like quack grass that will get through the first year; you’ll have to dig them up.” But after a few years of putting more and more compost down—basically, using compost as your mulch—eventually, you don’t have weeds. By contrast, Armour says, “If you were to till every year, you’re constantly gonna get weeds.”

To create that first no-till bed, Armour recommends beating down the vegetation with a weed whacker, then laying down a single layer of cardboard (he gets big pieces from the recycling center). He says that it’s a lot less hassle to remove the plastic tape before you lay the plastic down rather than remove stray plastic from the soil for years thereafter. You can use newspaper, too, but it tends to blow away before you get it situated; cardboard is more cooperative. Then over the cardboard, put down three inches of compost (for garden beds) or a layer of woodchips (for paths).

Every year the Armours add an inch of compost to their four acres of permanent raised beds. The compost the Armours use is manure-based from their own cows mixed with a hotter horse manure from a neighbor’s farm. Armour checks the compost pile daily to make sure it is adequately cooking so that weed seeds are burned up. To help further control weeds and keep moisture in the soil, the Armours mulch with straw for some crops, like tomatoes. The next year, they simply leave the mulch in place and cover it with the annual top-dress of compost.

For further reading on the subject, Armour recommends Weedless Gardening by New Paltz garden guru Lee Reich. That book has also been helpful to Armour’s yoga teacher, Tricia Scott, who is also a chef and teaches seasonal whole foods cooking and living classes at the home she shares with her partner, Upashant, in Hurley. “Our first year of no-till gardening went really well, much better than we expected,” Scott says. “We installed 900 square feet of raised beds, and so the initial work was substantial, and labor intensive. But last year’s work made this year easy.”

I asked Scott if there were any snafus in getting started. “Last year,” she says, “because we started a month late, some of the matted leaves that we used as a base layer were not composted enough, stalling the plants’ growth for two or three weeks. But soon thereafter, they were growing beyond our expectations. The garden was also pretty much weedless. If Upashant would go out before me to the garden, I’d ask him to leave me a weed or two to pull, if there were any!”

In the fall, Scott and her partner added a 12-by-40-foot unheated hoop greenhouse over part of the raised beds so that they could eat cold-hardy greens all through the winter. They are currently adding another 600 square feet of no-till beds.

In addition to studying the Armours’ approach and reading Lee Reich’s Weedless Gardening, here are some recommended sources for no-till inspiration and guidance. Ruth Stout (1884-1980) believed in gardening under a permanent thick layer of mulch to suppress weeds. She wrote numerous books on the subject, including The Ruth Stout No-Work Garden Book, Gardening Without Work for the Aging, the Busy & the Indolent, and How to Have a Green Thumb without an Aching Back. There is also an excellent short documentary about her, called Ruth Stout’s Garden.

In 1975, the plant pathologist and philosopher Masanobu Fukuoka (1913-2008) wrote the classic, The One-Straw Revolution. In his approach to what he called “natural farming,” he eschewed plowing, herbicides, and synthetic fertilizers yet enjoyed unusually high yields in his rice fields. According to Onestrawrevolution.net, “Fukuoka observed that when he ceased plowing, his weed population declined sharply. Weeds need not be wholly eliminated; they can be successfully suppressed by spreading straw over freshly sown ground and by planting ground cover. Eliminating intervals between one crop and another through carefully timed seeding is essential.”

Patricia Lanza’s Lasagna Gardening (1998) came about after her years of experimentation with gardening on poor, rocky soils in the Catskills. Building the garden up became a necessity of site but also she didn’t have time to do a lot of weeding. Her lively book using the analogy of creating lasagna makes this method of layering organic matter to suppress weeds very appealing and accessible.