Founded in 1963 to stop the siting of a power plant on Storm King Mountain, Scenic Hudson is credited with launching the modern grassroots environmental movement. From Manhattan to Albany and beyond, Scenic Hudson is involved in some of the most important issues facing the region—climate change and social justice foremost among them—working with citizens, municipalities, and lawmakers to turn policies into actionable models. The organization's 44 parks are also a tremendous public asset, and all have remained open since the start of the pandemic. I spoke in late June with Ned Sullivan, president of Scenic Hudson, about the role the organization has to play at this time of crisis and flux.

Brian K. Mahoney: Scenic Hudson works along many fronts—land preservation, advocacy, policymaking, environmental education, and community building among them. How does it all fit together for you?

Ned Sullivan: On the ground, we are working to preserve land and create parks along the river and in the key areas of the valley and preserve working farms. We use those parks and lands as outdoor classrooms and points of inspiration and help to define the identity of the valley, which has many local components. But when knitted together, they create a cohesive and coherent presentation of the values that we hold and seek to share throughout the region, whether it's preserving the lands around Olana to protect the beauty of the views from Olana and from the river and the Rip Van Winkle Bridge to the biodiversity that exists in the waterfront lands, the marshlands at our ranch on Livingston Marsh that has a unique habitat and ranges of threatened and endangered species.

How is farmland preservation integrated in Scenic Hudson's work?

In terms of farmland preservation, we're both working to protect the farms, but we are now also working to support farmers who want to move toward regenerative agriculture practices and, in so doing so, create a model of farmland preservation and stewardship that can spread throughout the region, the state, and nationwide at a time when climate change action is so critical. 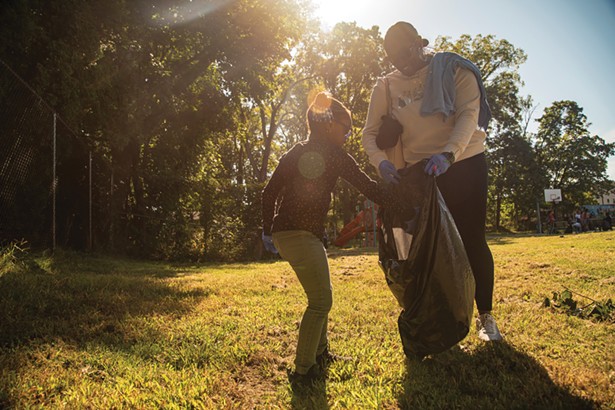 And we've done this through public policy. We have supported Governor Cuomo and Assemblymember Didi Barrett in creating a pilot program that will support farms that are incorporating regenerative agriculture practices—practices that will prevent farms from releasing carbon and methane greenhouse gases into the atmosphere and instead sequester the carbon in the soil and crops. We're working with individual farms and farmers, but also through public policy and the Hudson Carbon Consortium, which we're partnering with Abby Rockefeller and Ben Banks-Dobson of Rockefeller Farms on.

We're also bringing together all the leading research farms in the Hudson Valley, including the Farm Hub in Ulster County, Glynwood down in Cold Spring, and even going outside of the region, partnering with Duke Farms in New Jersey and the resident trustees of reservations in Massachusetts. We're documenting results of these regenerative agriculture practices and asking the question: How do we make the information, the data, the practices that they're employing available to working farmers who are struggling to make a living and to provide food locally and regionally?

We are working on the ground with individual farm lands, farm properties, but also knitting them together into a regional model. And we have some leading scientific groups in the area and in the country working with us on this, including Cary Institute in Millbrook and Woods Hole Oceanographic Institute.

Cities are also a big focus of Scenic Hudson's work. Tell me about the Successful River Cities Coalition.

Scenic Hudson has been active in the cities of the Hudson Valley for decades. And we have historically purchased waterfront properties in places like Beacon, Yonkers, Peekskill, and Haverstraw, often taking contaminated lands and turning them into tremendous community assets. Our River Cities Initiative is aimed at going into those cities—we're focusing on Newburgh, Poughkeepsie, and Kingston, initially—and listening first, having conversations with leading stakeholders about how restoration of the natural resources in those cities can be vehicles for educating the young, helping them get skills that will enable them to advance their formal education, and then how they can, in a hands-on way, improve their own neighborhoods and make connections across the cities by doing so.

In Poughkeepsie, we've been collaborating with groups to turn the Fall Kill Creek into a greenway and a safe place to both get down and enjoy the creek but also create a trail along it that will connect different parts of the north side of Poughkeepsie and ultimately lead people down to the Hudson.

And there is a micro-farming project associated with that?

Yes, there's a plot of land owned by the city on Pershing Avenue that we've been working to turn into an urban farm. And there's a city park called Malcolm X Park that runs along the Fall Kill that we would like to revitalize. Similarly, in Newburgh, we've helped work with the community to revive Crystal Lake. And that at one time had a sandy beach, a lifeguard, a hot dog stand, and was the centerpiece of festivals, but became an abandoned, derelict kind of a place for drug transactions. And we worked with the community to open it back up. That's operating now as an urban garden. And there are young people who are working with us on this project who are getting high school and community college degrees for the work that they're doing.

The pandemic and the worldwide protest against racial injustice have caused people to rethink kind of closely held assumptions. do you see what has happened over the past few months is cracking open something that you guys are working on?

Absolutely. Our urban initiatives are coming to the heading for us of community building. This is something we've been working on since 2017, and so we've established partnerships with people and stakeholders and groups in communities. But now we do see this as a threshold moment to make breakthroughs in both policies and in the lives of people in the community. And we want to be sure that our parks and all public spaces are open equally, to all. To Black people, to indigenous people, to people of color. We see this as a moment where it's important for us to speak up and act and to continue and strengthen our work in the cities, continue our work throughout the valley and educating the young in their role as environmental stewards, but also Scenic Hudson has been forward-looking and speaking out and taking stands for all the people of the valley since our inception.

And this is a moment where everyone means everyone. Giving everyone a voice. We're going to continue to try to ensure that the diverse voices within Scenic Hudson among our staff members are heard, and that we are a bridge to other community members and amplify their voices to make their cities and their neighborhoods supportive of them in terms of the beauty and quality of life that they can enjoy and that can be transformative and supportive of job creation in cities in the valley.

The Future Is Now the future is now land use

Speaking of Land Use

Taking Back the Streets