A look at the candidacies of Anthony German, Ola Hawatmeh, and Mike Roth.

One campaign ends and another begins. Just seven months after US Representative Antonio Delgado was sworn into office, the race to challenge him in 2020 is already underway.

Last year, nine Democratic candidates ran to unseat Republican John Faso, with seven making it to primary day. Delgado eventually won that race by five points, raising an astonishing $9 million and putting the seat in Democratic hands for the first time in nearly a decade. Now the race to take it back looks like it might be just as crowded.

So far, three Republicans have already filed to run in New York’s 19th district, which covers the Hudson Valley, the Catskills, and part of the Capital Region, though it’s possible more candidates will jump into the race in the coming months. Here’s a look at the current field of challengers.

The most recent entrant into the race is Anthony German, a former New York National Guard general who filed to run on Wednesday, August 14 from Oneonta.

According to the Albany Times Union, German is running because he believes “the political landscape has become [too] divisive” and that the incumbent “isn't representing the ‘values of the district” and has “gravitated to the ‘extreme left’ of Congress, despite campaigning as a moderate last year.”

German cited Delgado’s vote for the 2019 National Defense Reauthorization Act—which passed with zero votes from House Republicans, who believed that it provided insufficient Pentagon funding—as an example of a Delgado position he disagrees with.

German pointed to healthcare as an area where he would seek bipartisan compromise but said "we'll flush out the details as we move forward." German did not respond to a request for comment on this story.

German joins Ola Hawatmeh, a 42-year-old fashion designer and two-time breast cancer survivor from Poughkeepsie. The daughter of Catholic Jordanian immigrations, Hawatmeh grew up in Poughkeepsie but moved to St. Louis after graduating from Marist College in 1999. She moved back to the district last month.

Hawatmeh, whose website describes her as a “philanthropic fashionista,” says she uses her platform and stature in the fashion world to empower young people, veterans, and people with disabilities by putting on fashion shows for them.

She was also the co-founder of the pro-Trump Middle Eastern Women’s Coalition, which once alleged in a press release, “President Obama created ISIS and encouraged Sharia Law throughout the Middle East.” Hawatmeh says she disavowed the statement and resigned from the organization because of it.

A fan of Fox News Host Sean Hannity and a steadfast supporter of President Trump, Hawatmeh says she supports building a wall on the Mexican border, the Trump administration’s policy of detaining children and separating families at the border, Trump’s trade tariffs, and repealing Obamacare. She diverges with Trump on climate change, which she believes is a legitimate threat to the country.

Hawatmeh says she and Delgado agree on “veterans and farmers” but that she doesn’t “see the numbers changing in the district” since his election. She added that she doesn’t think he’s “out there” enough, arguing that Delgado could be doing more for the district. “You won’t find me sitting in a loft in Rhinebeck with assistants and interns running around,” she declared, “It’ll be me out in the streets making a difference.”

Related A Conversation with Antonio Delgado: NY19's Congressman-Elect Talks about His Campaign and His Plans for Washington

The Delgado campaign said in a statement "[Congressman Delgado] has held twenty-one town halls across the district, and will continue to serve with accessibility, accountability, and transparency."

Per Hawatmeh, her strategy, both in the primary and general elections, is “heart and passion,” and “being genuine.” She notes that she’s not a politician, in contrast to Delgado. She will be officially launching her campaign in September but is hosting a fundraiser at Chelsea Pier later this month.

Finally, Mike Roth, who filed to run in July, is a Brooklyn College graduate and an Ellenville resident. He maintains an active presence on social media through his campaign Facebook account where he frequently posts about “evil Democrats” and “commies.” He was the organizer of an Ellenville Trump rally last month, which featured a brief altercation between a protestor and several Trump supporters. 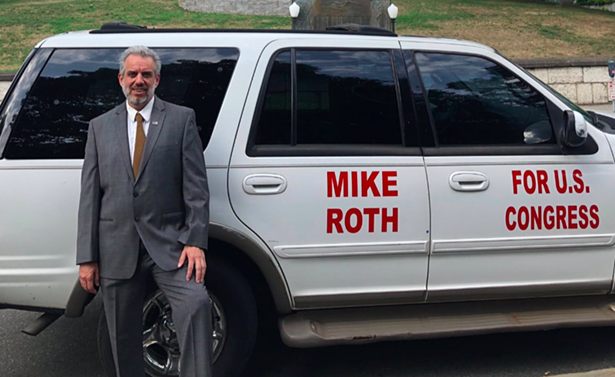 Roth’s hard-right views are evident in his platform, which is posted to his Facebook page. Among his 16 platform points are proposals to create a separate state for upstate New York, to make saying the pledge of allegiance mandatory in schools, to make English the official language of the US, to make the use of the words “white privilege” a hate crime, and to designate Antifa as a terrorist organization.

When called for comment on this story, Mr. Roth simply stated “I don’t do interviews.”

Prospective candidates for the seat include State Senator Sue Serino from Dutchess and Rensselaer County Executive Steven McLaughlin. Serino and McLaughlin did not respond to requests for comment.

While the race remains wide open and there is no clear frontrunner, one thing is for sure: this will be a long 15 months.

Voting Timeline: 2020 Election At A Glance