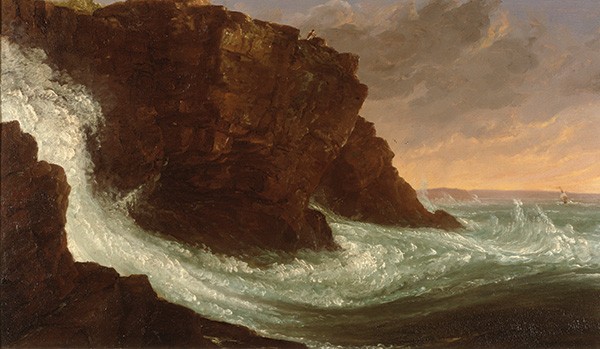 A great artist wishes for greater disciples. This was true of Thomas Cole. In 1844 he took on an 18-year-old apprentice, teaching him to draw from nature, then to repair to the studio and produce finished paintings. (Cole's fee: $300 a year.) In return, the student lived at Cedar Grove, Cole's house in Catskill, often babysitting his three children. This apprentice was Frederic Church, who would become the greatest American artist of his generation, eventually building Olana, a Persian-fantasy mansion, across the Hudson River. "Thomas Cole & Frederic Church: Master, Mentor, Master," an exhibit at the Thomas Cole National Historic Site examining this tutorship, opens April 30.

One of the great pleasures of museumgoing is the retrospective, which documents an artist's emergence from adolescence into a unique and historic style. For writers, this is called "finding one's voice." I'm not sure what visual artists call it—maybe "finding one's eyes"? This exhibition reveals such an awakening in Church, displayed as a dialogue between him and his mentor in drawings, paintings, and oil sketches. "I think it's one of the most interesting and important relationships in the history of American art," remarks John Wilmerding, guest curator of the show. Wilmerding is an emeritus professor of American art at Princeton.

The curator compares Cole and Church to two contemporary figures in American literature: Ralph Waldo Emerson and Henry David Thoreau. Emerson took Thoreau on as a disciple, and the younger writer eventually became a master himself. As in the case of Cole and Church, the elder figure was an idealist, the younger drawn to realism. "If you read Emerson's essay on nature, he talks in generalities: 'vegetable decay,' 'the transparent eyeball,'" notes Wilmerding. "These are larger spiritual ideas. Whereas if you read Thoreau's Walden, he goes out and measures the pond! It's all about specifics: specific sunsets, specific clouds. It's the same with Church. Cole's paintings tend to use the same kind of brushwork to describe a rock and a passage of water, whereas Church really is a kind of scientist, painting the way a rock is different from clouds or sky. Cole generalizes; Church specifies."

In the images of the show, one senses what Wilmerding calls a "quasi-Oedipal relationship" between the two painters. Cole was old enough to be Church's father, but the youth had his own ambitions. Is it meaningful that Church's pencil portrait of Cole from 1845—halfway through the apprenticeship—shows the teacher with eyes downcast, almost asleep? The disciple had "caught him napping." Quoth Wilmerding: "Church emerges from this two year period no longer as a disciple or an apprentice but begins to flourish in his own right." In 1848 Cole died suddenly of pleurisy, at the age of 47. The next year, Church was elected as the youngest associate of the National Academy of Design. He was now the leading exponent of the Hudson River School.

For all of Church's promise, the "hit" of the show is Frenchman's Bay, an 1844 Maine landscape by Cole in which a massive, brooding red-brown rock grimaces down on the surrounding surf like a pagan god. An exhibition catalog accompanies "Master, Mentor, Master," with an essay by Wilmerding.

The Cole National Historic Site has also announced its plans to reconstruct Cole's Italianate "New Studio"—designed by the artist—which was torn down in the 1970s. Construction begins in June.