Thirsty for Knowledge: The Culinary Institute of America's Brew U

Every October, The Culinary Institute of America in Hyde Park hosts its annual festival of all things beer. Brew U brings together about two dozen of New York's finest brewers for a day of brewery tours, seminars, and craft beer sampling for beer geeks from around the country.

Now in its fourth year, the October 19 event offers the chance to meet these masters of the craft in person, so come with your questions and compliments. Whether you're on your own craft brewing journey or just love a good quaff, these are the folks you'll want to hang around with just to soak up all the brew wisdom you can. Plus, you get the CIA guarantee of being surrounded by delicious food all day.

"What separates our event is it brings together all the things CIA does well: we'll have food demos in the Innovation Kitchen, with local chefs giving 20-minute presentations," says CIA Head Brewer Hutch Kugeman, the resident beer expert who's been running The Brewery at the CIA and co-teaching the college's Art and Science of Brewing course since 2015. "Last year, one session was about putting the leftover beer in your growler to good use. We hope everyone goes home with something new to try. We love it when people leave with a fresh idea."

Four educational seminars are included in the ticket price. This year, two will focus on brewing, one session will center on sake, and another on fermented foods. 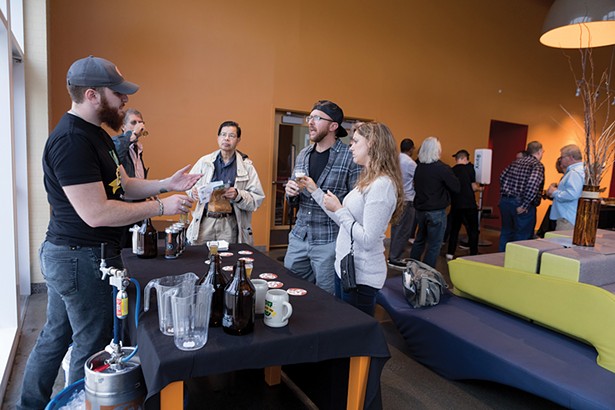 "A lot of the brewers come in person to pour instead of sending staff," says Kugeman of the mix of Hudson Valley, Capital Region, and New York City-based brewers. "You can go sit and learn from the ones you like the best."

Last year's Brew U brought together about 500 attendees, creating a welcoming environment for a diverse assortment of draft lovers. "It draws such a cool mix of people—craft beer lovers, casual fans, people who just love the CIA, people of all ages and walks of life from all over the valley and the tri-state area," says Kugeman. "Put everybody together in a gorgeous room with huge patios overlooking the river at peak foliage season and have a good band. It's joyous."

Those who attend Brew U this year can expect even more good cheer than usual. The CIA's own microbrewery was honored as New York State's Brewery of the Year for 2019 at the statewide Craft Brewing Competition, hosted in Rochester by the New York State Brewers Association. Not only that, two student creations won gold medals.

Brew U takes place Saturday, October 19 from 2-5 pm. General admission is $85, designated drivers can attend (and enjoy seven mouthwatering food stations) for $30, and a $120 VIP ticket gets you in an hour earlier, to enjoy exclusive pours and tastings along with oysters and filet mignon.