The XY Files: Guy Lawson and the Dudes 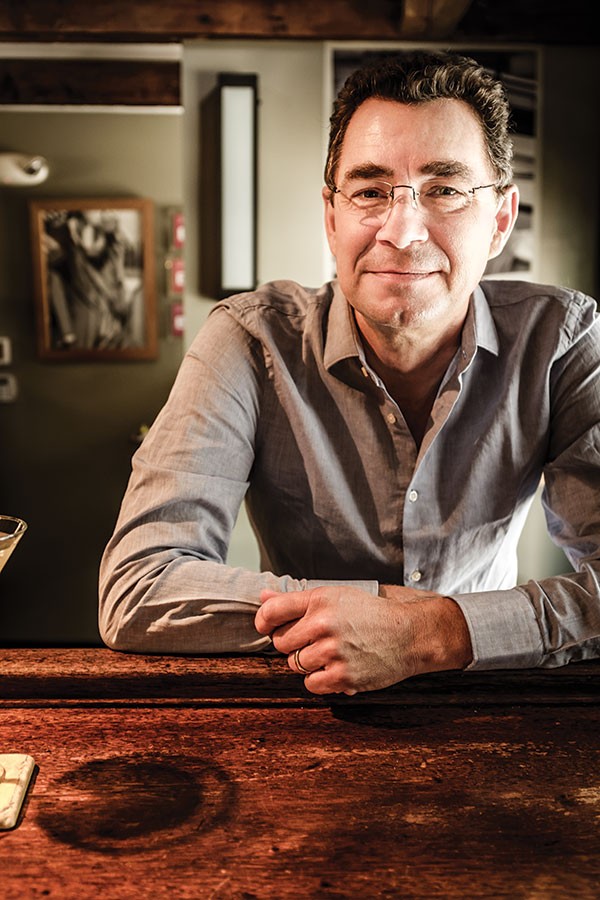 Journalist Guy Lawson writes about men you don't want to meet: gunrunners, Wall Street scammers, Mafia cops, drug-dealing wrestlers, Hezbollah suicide bombers. Unless the screenwriters have invented new characters, the forthcoming film of his latest book, Arms and the Dudes, starring Jonah Hill and Miles Teller and directed by Hangover auteur Todd Phillips, is sure to flunk the vaunted Bechdel Test (must have at least two women in it, who talk to each other about something besides a man).

Author and commentator Sarah Vowell, a friend, once told Lawson, "You're the most ridiculously male-oriented writer in the world." Even his name is hypermasculine: guy, law, son.

So who is this Guy? Anyone expecting a Central Casting testosterone cowboy is in for a pleasant surprise.

The lanky, bespectacled man poring over a stack of newspapers at Rhinebeck's Bread Alone is a Cambridge graduate with an affable smile and a forthright, intelligent gaze. He dotes on his wife, Indian food entrepreneur Maya Kaimal, and twin daughters. His sport of choice is walking, which he calls "a meditation." He doesn't drink coffee. Even his name defies expectations: "Guy" is pronounced in the French style—rhyming with bee, not buy—as his leftist parents' homage to Trudeau-era Canadian multiculturalism.

Though Lawson acknowledges that his "specialty is groups of men doing fucked-up things," he's also stalking the story behind the story. His foreground subjects wheel and deal, trying to hustle a buck, and wind up as pawns in a much larger game, exposing deep strata of institutional corruption.

Arms and the Dudes (Simon and Schuster, 2015) is a case in point. Its subtitle, "How Three Stoners from Miami Beach Became the Most Unlikely Gunrunners in History," promises an outrageous, stranger-than-fiction romp, and the book doesn't disappoint. Expanded from Lawson's 2011 National Magazine Award-nominated Rolling Stone feature, Arms and the Dudes follows the jaw-dropping misadventures of three "wake and bake" stoners, former yeshiva boys barely out of their teens, who won a $300 million dollar Defense Department contract to supply guns and ammunition to the Afghan military.

"The dudes are the personification of the adolescence of American foreign policy: young, naive, and in way over their heads," Lawson says.

He first encountered them in a front-page New York Times article on March 28, 2008. C. J. Chivers reported the Pentagon's bust of Efraim Diveroli, David Packouz, and Alex Podrizki for fulfilling their defense contract with illegally repackaged Chinese ammunition that had been stored for decades in Albanian mountain caves. It was a great story: These cocky young guys had tried to game the system, and they'd been caught. But Lawson wondered why they'd been hired in the first place. As he researched, he realized that the dudes and other small-timers were middlemen and eventual fall guys for a shadowy linkage between the Pentagon and illegal arms dealers. The Times story, in essence, had mistaken the puppets for puppeteers.

Could this be the reason the newspaper of record has not yet reviewed Arms and the Dudes, although it ran reviews of Lawson's first two books, The Brotherhoods: The True Story of Two Cops Who Murdered for the Mafia (Scribner, 2006; with William Oldham) and Octopus: Sam Israel, the Secret Market, and Wall Street's Wildest Con (Crown, 2012), not to mention that Octopus made the Times' bestseller list and an A-list movie of Arms and the Dudes will open in March 2016?

"Call and ask them," says Lawson. "I'd love to hear what they say."

The Times has not blackballed him; Lawson is currently writing a feature for the Sunday Magazine. But the omission is striking, especially to a journalist whose stock in trade is skepticism about the official version of anything. In sequential books, he's examined corruption and greed in the NYPD, Wall Street, and the Pentagon, limning "a 21st-century collapse of American institutions."

Lawson was born in Canada to expatriate parents from Australia and New Zealand. "My father was deeply anti-American,' he recalls. "I grew up drinking soda in cups that said 'Nixon Drinks Canada Dry.'"

After his partents divorced, Lawson lived with his mother until she remarried; as a teenager, he moved to Australia to rejoin his father, a one-time journalist and political speechwriter who wrote topical songs in the Tom Lehrer vein. "My father didn't succeed," Lawson says bluntly. "A lot of my animation and ambition comes from that realization."

Speaking of Guy Lawson , Arms And The Dudes