The Wrong Turn to the Right Place 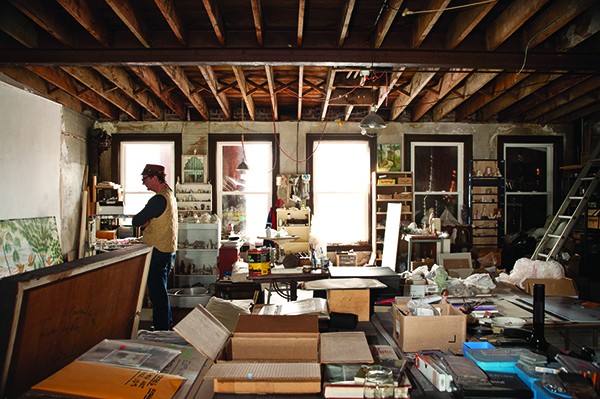 It took a few wrong turns to bring artist Kevin Paulsen to his rightful place in Uptown Kingston.

Back in 1997,while living in Nantucket, Massachusetts, Paulsen began scouting for loft space in the Hudson Valley.

"I wanted a really big studio," says Paulsen, a muralist and painter who is originally from Kansas City, Missouri. "I was tired of Nantucket, tired of the isolation of island living. A few of my clients were still on-island, but I had a lot of off-island work and was showing at galleries in New York, so probably 50 percent of my work was elsewhere. It was just easier to be on the mainland and get the space that I needed to do murals and big paintings."

Initially, Paulsen says, he headed to Hudson, which was then beginning its resurgence. "One morning, I looked at a building in Hudson and I actually put $1,000 'earnest money' down on it, on lower Warren Street," he recalls.

Then he got back on the road, planning to head to New York City. But that afternoon, when Paulsen tried to make a routine rest stop in Kingston, he got lost—and, in the process, changed his life.

"Getting off the Thruway, there are all these one-way streets in Uptown Kingston, and it's confusing if you don't know the area," he says. "I got lost on Wall Street, and I liked the look of it."

That afternoon, Paulsen asked a real estate agent to show him a storefront Uptown and signed a lease to rent the three-story, 4,500-square-foot building, built in the early 1900s.

"I changed my mind immediately [about Hudson] after seeing this building," he says. "It was big and cheap and had an open floor plan. I liked the old buildings on the street, and I liked the quiet."

An added bonus was the building's location. "It's close to the Thruway, and closer to New York. That extra hour's drive between Hudson and New York was troubling, anyway," Paulsen admits.

The building housed a small computer business on the ground floor but had long been home to a small department store called Flanagan's, Paulsen recalls. It had a small restroom on the second floor, but no bath or shower; lacked heat on the upper floors and electricity on the third floor; and had been sitting empty for decades, but none of that fazed Paulsen. Over the next year, he made the long drive often from Nantucket to Kingston to work on gutting the building to create living and workspaces.

Paulsen quickly decided to make the second floor the living space. Formerly the location of the department store's dressing rooms, that floor has a 14-foot ceiling. He chose to turn the third floor, once a garment-making shop, into a studio space. There, the ceiling is 10 feet high at the front of the building and 15 feet at the back.

Paulsen's first tasks were to bring the heating system upstairs and dismantle the shuttered walls that had been built to cover the east- and west-facing windows on the building's front and back, respectfully. "All of the windows were welded shut," he says. "I had to open them back up." Today, light streams into the kitchen in the afternoon.

Paulsen created a simple kitchen at the back of the building along its south wall featuring a six-burner gas Montague Grizzly stove and a stainless steel Frigidaire Gallery, both of which remain working nearly 18 years later. A sometime antiques dealer, he used antique tables and cabinetry to assemble a charming hodgepodge of storage areas and a long kitchen bench, and added a large, round wooden table and chairs.

Opposite the kitchen area is the updated restroom with its original sink and tiles. Paulsen originally planned to enlarge the room to add in a bathtub and shower, but decided instead to place the tub on the bathroom's outer wall behind a curtain at the top of the stairs. "There was going to be a wall with a walk-in closet and stackable washer and dryer," he says. "I was going to do the whole thing, but then I decided I just wanted to get to work [on my art]."

Although he admits there isn't much privacy, he says it's not really a problem. "It's not like people are running up and down the stairs all the time," he says. "Whenever I have people over, or spending the night, it's like, 'Well, hello. I'm taking a shower now.' But you just don't care after a while."

The street-facing end of the floor is Paulsen's living area. Separated from the kitchen by a canvas curtain, the bed faces five large windows. Throughout the space, there are small seating, storage, and working areas as well as sleeping areas for guests and his poodle, Louis. The furniture is whimsically eclectic and includes everything from an antique German wardrobe to a 1950s end table and lamp. It's decidedly funky, Paulsen admits. "I didn't want one of those houses where people walk in and you say, 'Take your shoes off.' I work in those houses [installing murals] and I love 'em, but I don't want to live in one."

Everywhere throughout the living space, which is painted sage green in rich contrast to the kitchen's deep crimson, hang a multitude of artworks from Paulsen's ever-growing collection. Paulsen is a longtime art collector and the former owner of the now closed OO Gallery, which was located on Wall Street. Next year, the Rockland Center for the Arts will show selections from his extensive and eclectic art collection, which includes local works by Joe Concra, who is Paulsen's neighbor and friend, and Scott Danielson of Beacon; New Orleans photographer David Halliday; 19th-century American painter Thomas Chambers; and contemporary painters Souther Salazar, Fred Stonehouse, Esther Pearl Watson, Brad Woodfin, Gary Taxali, and John Phillip Abbott.

In the top-floor studio, Paulsen installed electricity, but chose not to bother with heat. Since the building shares walls its north and south sides and the alleyway at the back protects against winds, "the studio is stable at about 50 degrees, even in the dead of winter," says Paulsen. "I don't mind it."

While Paulsen's latest commissioned atmospheric interior mural covers one studio wall, and his large-scale paintings-in-progress are placed throughout the space. It's a still-raw but calm space with gray floorboards and plenty of natural light—a far cry from the "tar-papered-over broken windows and dust-covered dead space" that Paulsen first found there. Today, music plays on a sound system and the space is a hive of creative activity. There, Paulsen creates the murals he has been commissioned to do for the likes of National Football League Commissioner Roger Goodell as well as the paintings and collages he shows at the galleries Gráficas and Nantucket House Interiors in Nantucket and Kenise Barnes Fine Art in Larchmont, as well as at Bergdorf Goodman in Manhattan.

When it comes to life in Kingston, Paulsen has had a front-row seat for nearly 18 years. "There was a time when nobody was here," he says. "You could park anywhere. You could walk to the Mohican green grocer." Although he worries sometimes that Kingston's increasing popularity will ultimately make it unaffordable for other, newer artists, he's also pleased to see Uptown flourishing, and works to bring street art to the now nationally known O+ Festival. "I like Kingston a lot," he says. "It's always had interesting folks. There's just more of them now."