The Wood-Burning Lifestyle: How to Dry, Stack, and Store Firewood Like a Pro

For many of us, firewood is something we only think about right as the colder months hit. But for Glenn Nystrup, owner of New Paltz-based Glenn’s Sheds, the wood-burning lifestyle is a year-round pursuit. Today, Nystrup devotes much of his time to designing and building open-air firewood sheds for homeowners in the Mid-Hudson Valley, but his appreciation for the value of trees in every form grew out of a post-college “back-to-the-land” pursuit.

In the 1970s, Nystrup and his wife lived in the North Country of New York near Ontario. In addition to tapping the trees on his property for maple syrup and using some of them for lumber, he learned from a county forest service ranger how removing select trees could contribute to the overall health of the forest and provide firewood in spades. “Don, the ranger, said that by leaving the tops and small branches of the trees to decompose, more than 80 percent of the nutrients the tree had to offer back to the earth through its compost would still be there,” says Nystrup.

“Another benefit of this was that we got to save all of the wood for firewood to keep us warm in the winter,” he says. In the North Country, temperatures during the winter could drop below minus-30 degrees and Nystrup and his neighbors often had no back-up heat source other than wood. “If our firewood was not dry enough or plentiful enough, the consequences could be dire,” he says. “We learned a lot about burning wood and developed a deep appreciation for it—one that survives to this day. It is a simple, pure source of energy: one that supports our survival.” 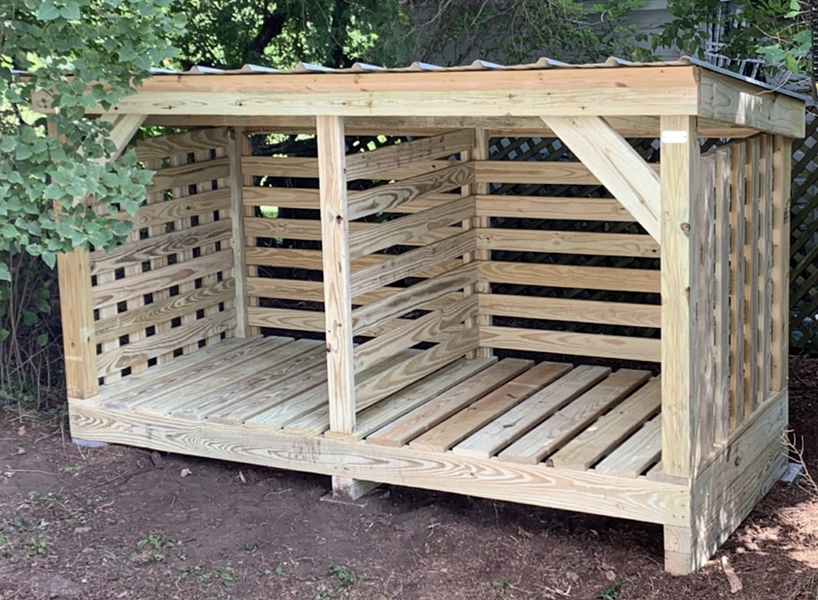 Before you throw any piece of wood to your woodstove or fireplace, it should be properly dried. “When the wood becomes fully dry, meaning the interior cells lose their moisture, the wood is considered 'seasoned,' and not until then,” Nystrup says. “No matter what you hear about wood being dry, it is best to give it a few months in a setting with proper air flow.”

According to Nystrup, firewood stored under tarps won’t have the necessary air flow to get or keep the firewood dry. Wood stored in an enclosed space like this will slowly begin to decay over time and lose its heating potency. “The wood might burn, but at a lower heat,” he says. Burning unseasoned or decaying wood can cause “many BTUs to go ‘up in smoke’ without offering up thermal value,” says Nystrup. It can also cause the accumulation of creosete (a byproduct of incomplete combustion) in your chimney, which can pose a fire hazard over time.


A properly stacked firewood pile helps ventilate the wood and prevents mold and fungus growth, but “the stacking of firewood can be a more tricky endeavor than one might expect.” Nystrup says. “Though it seems like a simple task, it is one that requires focused attention.”


Keep in mind that if the firewood isn't seasoned yet, you can also stack it bark-side down to allow any moisture to easily evaporate upward. To help balance the pile as you stack, he recommends keeping a close eye on where and how the pile is beginning to lean, then adjusting as you go by flipping the pieces or selecting a piece that is a better fit for that spot. “Stacking wood is a perfect moment to practice presence—an awareness of each piece of wood placed on the stack, ready for when it will be asked for its service,” he says.

Nystrup also finds it useful to separate stored firewood by category. “I like to place dividers in the sheds that I build for myself so that I might separate seasoned from green wood.” He also separates wood based on its use and burn time. For example, varieties like ash and cherry are good for burning during the daytime, whereas maple, oak, or locust have a steady, long burn that are good for heating a woodstove overnight. By grouping firewood with similar burn rates together, you can make each load of firewood efficient and fit to your exact needs.