The Women Behind Catskill Farms 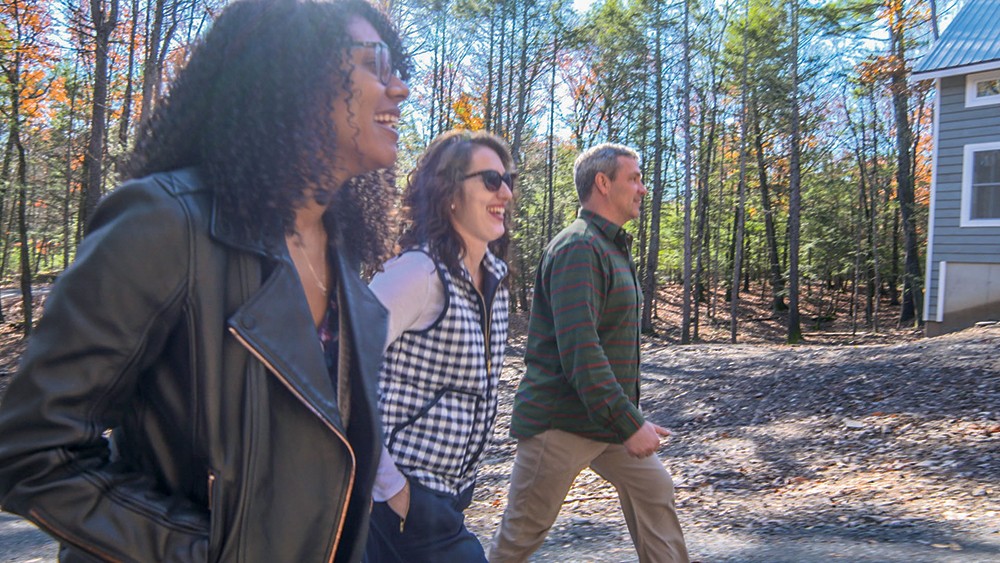 Two young women running a $12 million-a-year business in the male-dominated construction industry? That's the kind of contrarian logic that's defined Catskill Farms since Chuck Petersheim founded the company in 2001 after 9/11. Since then, the company has built 160 homes, and has eight to twelve houses in construction at any given time, and another dozen in the planning phase.

"Every day we're in the trenches, fixing problems, overseeing a dozen job sites," says Petersheim. "I love what I do, but I searched for years to find the right employees. You go through a lot of people if you demand excellence." As any employer knows, it's challenging to find and retain good employees. Especially in a tight labor market. Especially Upstate. Especially in Sullivan County.

Six years ago, he got an email from a 19-year-old interior design student at FIT who saw an article on Catskill Farms winning Country Living House of the Year honors. Amanda Krupunich was looking for a summer job. "I said 'Okay, c'mon over, but you're probably not gonna cut it—nobody does,'" says Petersheim. "Within a week, I was trying to convince her not to go back to college—she had that much potential. Her dad had to have a talk with me and ask me to stop trying to get his daughter to drop out of school. I settled for summers and school breaks until she finished school and came on full-time."

Six years later, Krupunich now pretty much manages all of Catskill Farm's projects: multiple jobs sites, demanding clients, and dozens of vendors, subcontractors, and employees—mostly men many years older than her. Asked how she navigates the rugged blue-collar, off-color humor of a construction site, Krupunich offers an all-business approach. "There have definitely been moments when a guy will make a mistake and just be completely inappropriate in some way," she says. "You really can't overreact. This is my team. They aren't perfect. I'm not perfect. We all improve together, and not just within the confines of actual job duties. We address what needs addressing, expect the lesson to be learned, and move on. It's a deal we have—they help me learn more about the business and I don't hold their boorishness against them."

In June of last year, Breanna Rodriguez joined Catskill Farms as a marketing coordinator, but soon found herself handling the books after the previous bookkeeper left—at a time when the company was the busiest it had ever been. "I like problem solving," says Rodriguez, "being able to dig into the books and see an issue, unwind it and figure it out."

For Petersheim, Krupunich and Rodriguez—who weren't hired to run the company, just to fill some small role—dispel the myth that millennials are not self-motivated, self-initiated, and can't take responsibility. "Here you have two young women who grabbed the bull by the horns and very quickly showed both their competence and their willingness to embrace a challenge in a small company that was thirsty for it," says Petersheim.

"People think we have this big company since we build so many homes, but it's just the three of us in the office," says Petersheim. "And the idea that two young women, with pretty light resumes, are running this busy company, is absurd, on its face. At the same time, it's working really well for our clients," says Petersheim. "I found two people who like to be challenged, are inspired by what they do, love the learning curve, and breathe fire. It's fun to watch them succeed. The odds were definitely not in their favor. But that's true for the entire Catskill Farms concept—we have a comfort level with counting on improbable outcomes."