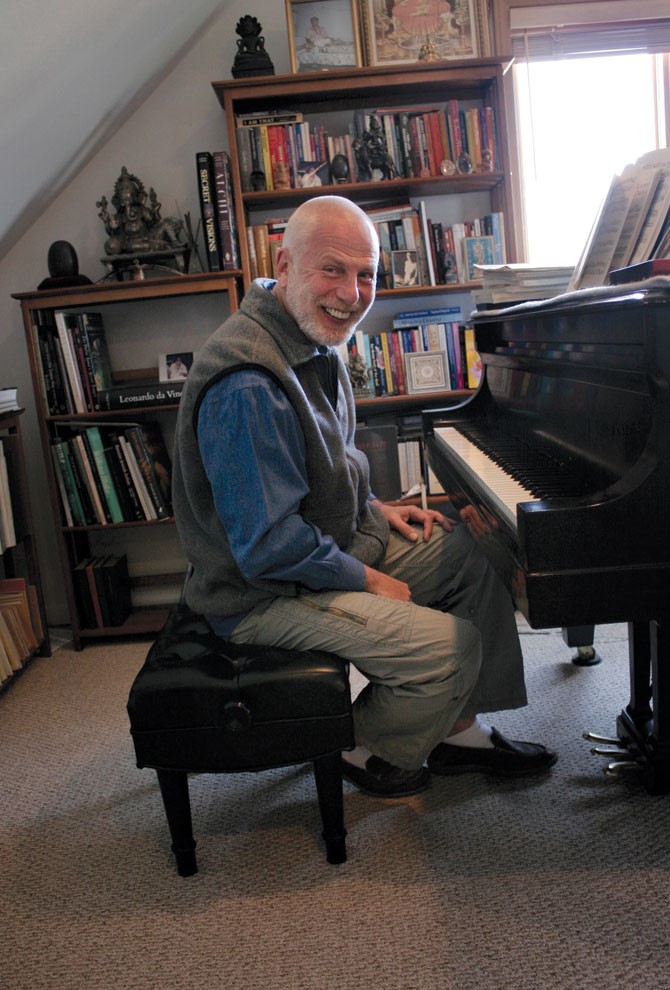 It shouldn’t take more than an hour, my life is not all that interesting,” quips Vladimir Feltsman when scheduling our interview.

A man who is universally recognized as one of the greatest pianists of our time. One who’s performed with every leading orchestra in America. Someone who endured the choking, Cold War-era cultural suppression of his homeland and emerged to play for presidents, headline at Carnegie Hall and Lincoln Center, and perform at the planet’s most prestigious concert series and music festivals. An artist of inconceivable technique, whose head-spinningly voluminous repertoire stretches from Baroque to 20th-century composers and boasts a growing discography that currently swells to nearly 40 recordings. The guiding founder and artistic director of SUNY New Paltz’s internationally celebrated PianoSummer festival.

No, not a very interesting life at all.

With due respect to the maestro, we beg to differ. Born in Moscow in 1952 to prominent theatrical composer Oscar Feltsman (“the Russian Irving Berlin”) and a musician mother, Vladimir Feltsman grew up two blocks from the Kremlin and was introduced to the keyboard long before his feet could reach the pedals. A particular, life-long affinity for Johann Sebastian Bach also came early. “Bach makes up the pinnacle of Western culture, along with Dante, Shakespeare, DaVinci, and Joyce,” maintains Feltsman, who has recorded a wide swath of the German composer’s oeuvre, including both mammoth books of The Well-Tempered Clavier (issued as an acclaimed four-CD set by Nimbus Records in 2009; imminent plans include completing his survey of Bach’s clavier works with the recording of 16 more such CDs for Nimbus). “Bach dedicated his life to his music, which has a resonance that transcends any written or spoken language. His music is the ‘poetry of knowledge.’ As a musician or a composer, through an understanding of his music you can automatically comprehend any other music.”

Yet despite his love of Bach, it was Beethoven’s Piano Concerto No. 1 that Feltsman performed when he debuted with the Moscow Philharmonic at age 11. “I remember [the concert] feeling wonderful; I loved being on stage and I was not nervous at all,” he recalls, adding, with a grin, “of course, as I got older and became more aware of everything, then I started to get nervous.” At 17 Feltsman entered the Moscow Conservatory, where he studied under preeminent professor Jacob Flier before next enrolling at Leningrad (now St. Petersburg) Conservatory. In 1971 he took the grand prize at the esteemed Marguerite Long International Piano Competition in Paris, and the resulting attention soon saw him touring extensively throughout the Soviet Union, Europe, and Japan.

His visits to the latter regions, however, were a stark reminder of how different things were back home, where the stifling censorship he and other Soviet artists faced was endlessly frustrating. “I am not a patient person to begin with—my wife will tell you this—so this was very hard for me,” says Feltsman. “It was like George Orwell’s 1984. Under the government at that time even [the music of] Liszt was considered ‘decadent’—let alone someone like [avant-gardist Alfred] Schnittke. Just to write or perform new, original music would bring problems. You could say I am ‘allergic’ to this kind of a system.” By 1979 the pianist had had enough and applied for an exit visa. The response? An immediate limit by the state on his performances and the suppression of his recordings. Fortunately, however, a growing number of music lovers and political figures in the US, including Senator Jack Kemp, were following his plight and made it a cause célèbre. The interest culminated with a 1982 “debut in absentia” concert at New York’s Avery Fisher Hall, in which a spotlight was shone on a lone grand piano as a recording of Feltsman played over the venue’s PA. Local critic, DJ, and Parnassus Records chief Leslie Gerber brought the story to the attention of then SUNY New Paltz President Alice Chandler.

“Jerry Gillman, who was then the head of [radio station] WDST, suggested that I visit with Feltsman on a trip to the Soviet Union I was planning and invite him to come to New Paltz,” says Chandler, who retired in 1996. “Feltsman was being punished for having asked to emigrate. Despite his extraordinary talent, he had become an ‘unperson.’ Instead of performing in concert halls, he was being forced to perform in factories and day care centers in places like Siberia. It was important symbolically that he come to America as a rebuke to Soviet authoritarianism and as a sign of support for artistic freedom. Sitting in his small apartment in Moscow, I asked him if he would like to perform in the college’s summer music festival. ‘You have a false passport?’ he joked. ‘I will go with you immediately.’”

It didn’t quite happen immediately, but, eight months of negotiation later, in 1987, Feltsman was at last granted permission to leave the USSR. Through Chandler he secured a teaching position at SUNY New Paltz, and later that year was warmly welcomed to the White House to give his first North American recital. “My guess is there was some kind of a deal that was done behind the scenes with [the Russian government], and they got something, I don’t know what, in return,” he says. “This is just a feeling I have, I’m sure I’ll never know all the details. But I will always be thankful to President and Mrs. Reagan for what they did for me and my family.”

With a sold-out Carnegie Hall debut later that year, appearances on “60 Minutes” and other TV shows, and lucrative contracts with Columbia Artists Management and CBS Records, Feltsman indelibly established his Western arrival, although he now admits he was initially thrown by the social, patron-driven aspects of the American classical scene. But since the moment he arrived at JFK carrying his four-year-old son atop his shoulders, the pianist has continued to send swooning US audiences into the stratosphere with his exquisite, every-note-felt-deeply performances. A Tribute to Rachmaninoff (2011, Nimbus Alliance Records), the passion-wrought document of a 1992 concert with the Russian National Symphony Orchestra—his first since emigrating to America—is enough to tingle the flesh and water the eyes. (The emotional homecoming was chronicled in the PBS documentary Journey from Home: Vladimir Feltsman in Moscow.)

Feltsman paid tribute to his origins in 2003 with the acclaimed “Masterpieces of the Russian Underground,” an unprecedented, nine-day, cross-genre series at Manhattan’s 92nd Street Y that surveyed music, film, poetry, and photography created under the Soviet regime. The choice of composers covered in the program, which Feltsman has called “unavoidably personal,” ranged from influences like Shostakovich to such friends and contemporaries as Schnittke and Sofia Gubaidulina, many of whom never considered their art a political act. “Myself, I am not interested in politics, I much prefer to stay out of politics,” says Feltsman, who in addition to holding the position of Distinguished Chair of Professor of Piano at SUNY also serves on the faculty of Mannes College of Music. Nevertheless, when asked about the recent, controversy-tainted re-instatement of Russian President Vladimir Putin, the former Russian citizen is decisively dismissive, calling the election “a meaningless circus.”

In 1994 Feltsman launched New Paltz’s PianoSummer festival, which every year draws musicians, teachers, and students from around the world. An integrated, three-week performance/instruction program, PianoSummer includes master classes, lectures, demonstrations, student recitals, and concerts. The majority of the events are open to the public, thereby affording students the opportunity to learn how to perform and present themselves before a receptive but discerning audience. In homage to his own teacher, he also created PianoSummer’s grand-finale segment, the Jacob Flier Piano Competition, which sees the winner performing with the Hudson Valley Philharmonic (conducted by Feltsman). This season’s schedule promises concerts by renowned pianists Alexander Melnikov and Jeremy Denk. As a lead-up to the festival, Feltsman will perform at a benefit concert and reception at the college on April 14. Held in conjunction with the inauguration of the college’s eighth president, Donald P. Christian, the music planned for the evening includes selections from Mussorgsky’s “Pictures at an Exhibition” and works by Liszt and Schubert.

In his review of a 2010 recital of Chopin’s four Ballades, the Philadelphia Inquirer’s David Patrick Stearns observes that Feltsman “plays a piano as though he is speaking through it.” The pianist himself, however, feels that ultimately it is he who is the vessel for the music, not his instrument. “There are two kinds of artists,” he offers. “There are the ones who express themselves, and there are the ones who see themselves as being a conduit of the music—which is how I see myself.”

Vladimir Feltsman will perform at Studley Theater on the campus of SUNY New Paltz on April 14 at 4pm; the concert will be followed by a reception with the artist. Funds raised will be used to support musical, theatrical, artistic, and other cultural events and activities that enrich the experience of students. Tickets for the concert only or for the combined concert and reception are available. Newpaltz.edu/inauguration.

The Lemon Squeeze: New Paltz Gets a Piano Bar