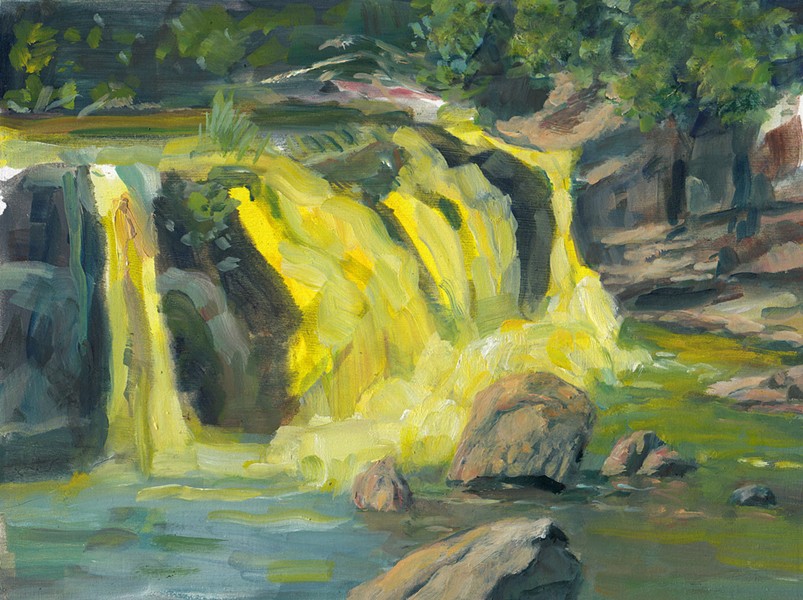 Famed Surrealist painter Marc Chagall, known for works such as I and the Village (1911), Paris through the Window (1913), and Green Violinist (1923), lived and worked in High Falls between 1946 and 1948, producing a significant number of works. At that time, Chagall was accompanied by his lover Virginia Haggard, an artist in her own right, her young daughter from a previous marriage, Jean McNeil, as well as their newly born son David.

Chagall spent six years in New York between 1942 and 1948, a productive time when he painted, but also designed costumes for the American Ballet Theatre and The Metropolitan Opera, murals for the Lincoln Center, and stained-glass windows for the United Nations headquarters. According to an article in the Smithsonian titled “The Elusive Marc Chagall,” the artist enjoyed “strolling through Lower Manhattan, buying strudel and gefilte fish, and reading Yiddish newspapers.” He never learned English.

Bella, his first wife had died in 1944, leaving Chagall heartbroken and disillusioned. He had lost not only his love, but also his muse and his best critic. In 1945, when his daughter Ida hired a housekeeper for him, Chagall re-discovered love in Virginia Haggard, the daughter of a British diplomat, who was born in Paris and fluent in French. Haggard was 30, and Chagall was 57 at the time. Haggard had just left her husband, a Scottish painter, with whom she had a daughter, Jean. The two fell in love, and shortly after bought a house in High Falls where their son David was to be born in 1946. The house had an adjunct cottage that Chagall used as a studio. This was a productive time in Chagall’s life, once again surrounded by love and familiarity.

When local author Tina Barry moved to High Falls in 2014, she was surprised to learn about the great painter’s time in the hamlet. She was intrigued however about the lack of information on his companion Virginia Haggard. Barry set to research, and eventually wrote a series of prose-poems dedicated to Haggard and her daughter Jean. The aim of the project is to explore a “reasonably imagined” inner-life of the two women living with Chagall in High Falls in the late 1940s, Barry explains.

Earlier this year Barry partnered with 14 female visual artists in a collaborative project that pairs 14 of Barry’s poems with visual works inspired by the poems. "The Virginia Project" will open at the Wired Gallery in High Falls on October 27, and will remain on view through November 25.

Barry hopes that "The Virginia Project" will shed light on two of the women in Chagall’s life while in High Falls, and will help the viewer reinterpret the artist’s work in a different manner.

She finds the show timely and relevant as other women who have been lost in history have been rediscovered in recent years in a way that helps re-write art history. On a personal level, Barry finds the project satisfying as it allows her to explore the creative process from a female point of view, and sense a feminine touch in the work.  Thewiredgallery.com