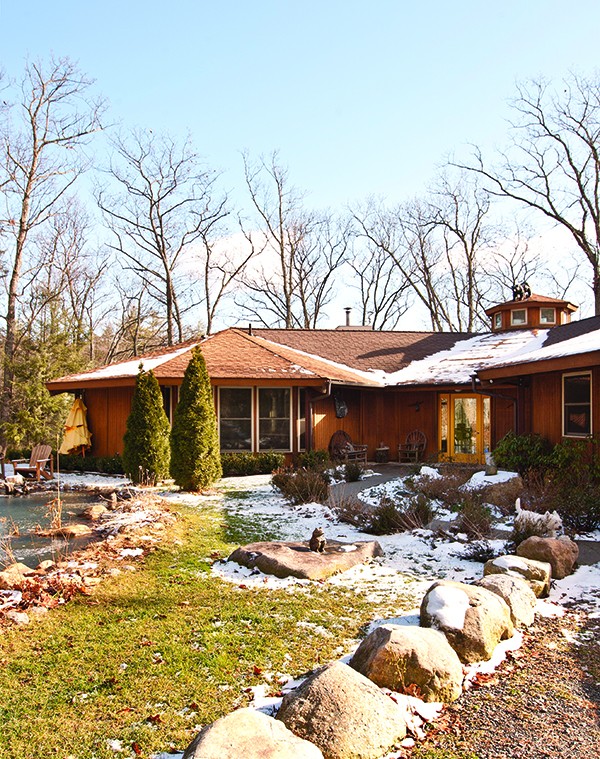 When artist and former watch designer Chuck Davidson set out to design a retirement home for himself and his wife Deena, his first thoughts were as much about time as they were about space. "I based the design on this premise: How do we want to move through time and space at this point in our lives? It's about fluidity and lightness of being," says Davidson. "I wanted a space we could kind of float around in—a kaleidoscope of art."

Before building their house on a scenic bluff in Cragsmoor overlooking the Walker Valley, the couple had lived in a farmhouse built in 1750 in Croton-on-Hudson for more than 30 years. There, they raised four daughters, kept horses, and collected antiques and art. Davidson commuted to New York City, where he was the creative director for Movado Watch Company for 20 years and for Citizen Watch Company for 12 years.

But once he retired from the watch industry, Davidson wanted a place where he could create a living art gallery to exhibit his own work and the Davidsons' art collection, and immerse himself in creating fine art stemming from his interests in paleontology, geology, and archeology. Nine pieces of his "archeo art" and "geolomorphosistic" sculptures, which incorporate found objects with natural ones, are housed in the permanent collection of the Russian Academy of Art in St. Petersburg. "Living in a historical house worked for us when I was working in a very modern world, designing very cutting-edge watches," he says. "But now I wanted to turn a page, start a new chapter. When you're younger, you like old things, but as you get older, the lightness of things starts to play on you. This modern house gives us vitality and happiness."

The Davidsons chose Cragsmoor as the site of their new home in order to be near two of their daughters and their families, who have settled in Pine Bush and Bullville. "We decided to make a move, not in our kids' faces, but close by," Davidson says. "We were looking for privacy and seclusion and an easy drive." Although the 12-acre property, which Davidson bought in 2004, is conveniently located with easy access to Route 52, it's also on a winding, sparsely populated country road that meanders uphill and downhill. "When we first moved out here I got lost all of the time," Davidson admits, laughing. "I had to tie ribbons on trees to remember the way."

Davidson began designing the house by walking the land, observing the light. As a native Californian who moved east in 1964, he says, simply, "I gotta have light." He repeatedly headed down from the road onto the natural shelf where the house now sits, then down the steep, 60-foot slope behind it to a stream, and up the hill that lies on the other side of the stream. "I wanted a sense of the topography," he says. "The shelf faces east, and it's placed halfway up the oak trees that grow from about 20 feet below on the side of the cliff. So I imagined the house to be floating, like a treehouse, like Mary Poppins, like an umbrella."

The idea of the umbrella form as both "uplifting and protective" stayed with Davidson as he refined his initial sketch into "a free-flow, move-through-space" design that was planned to showcase the culmination of his experiences in art and design and provide a peaceful haven. The house was planned down to the smallest detail, including every light fitting and light switch, even before he consulted with engineers and construction began, and its construction was complete in 2006. "The exact placement of everything was part of the original design, in order to elicit lines all in perfect places," he says.

The 3,000-square-foot house sits at the very edge of the natural shelf, "tucked into the trees." The structure consists of four interconnected pods, with each pod supported by a giant steel-columned umbrella with 1/4-inch-thick steel bracing held with eight steel bolts. Uncovered and unencumbered wooden beams radiate across the ceilings of each room. "[The umbrella is] overkill in effect, but it supports the space," Davidson says. "We didn't want load-bearing walls, just a big, open space, so I had to figure out not only how we would naturally move through it, but how to support and enhance it. That's where the umbrella came in."

The Umbrella House is entered from a circular driveway that leads down from the road past a manmade spring-fed pond designed by Davidson—stocked with fish and frogs and ringed with stones found throughout the property—and a small lawn area. "We have to mow a little, but there's little else to do for maintenance," he says. A glass front door opens to a 48-foot-diameter, circular great room, with the house's largest umbrella at its center. Tile flooring, in differing shades, is used to create distinct "islands." For instance, beneath the umbrella is a small seating area. To the right is a den area, featuring a dark-tiled floor and wall, fireplace, and large-screen TV, along with the entrances to the master bedroom pod and the garage pod. To the left is the kitchen, boasting high-tech appliances and a granite-countertopped island, and the entrance to the fourth pod, which encloses Davidson's studio. There, he does commercial design; volunteers for UNICEF, Ellenville Regional Hospital, and local nonprofit ArtsWAVE; and writes books, including Stamping Our History, a history of American postage stamps, published by Lyle Stewart, Carol Publishing, and TEM, a self-published novel about an architect and a cockroach. The studio pod also includes two small guest rooms sharing a full bathroom.

Directly opposite the front door, along the eastern wall of the house, is the dining area, overlooking a deck that meanders below 110 feet of continuous glass windows. The windows, says Davidson, not only provide an abundance of natural light, but also work to provide a natural heating and cooling system. "The leaves on all the oak trees block the light in summer, keeping the house cool, but when the leaves are off in winter, the windows become a primary heating source," Davidson says. "Through that and the radiant-heated floor, this house is very efficient."

Davidson designed the long, rectangular dining table, distressing its glass top by hand to create dreamy, cloudlike images. Over the table hangs a row of eggplant-shaped glass pendulum lights that serve as elegant counterpoints to the many natural objects displayed directly below along the table's center, including a cone shell from the Baja Peninsula, an onyx "Apache Tear" from volcanic Mt. Shasta in Northern California, and a pine cone from the Giant Forest of Sequoia National Park's "General Sherman" tree—the largest known living single-stem tree in the world. "These are not just for looking. I want people to pick these up and touch them and talk about them," he says.

In keeping with Davidson's mission to create a living environment for art, each wall features a single artwork or museum-quality artifact, creating a playful atmosphere. There are pieces by national and local artists, including several by Ellenville artist Judy Siguick, as well as by Davidson himself, including sculptures assembled from found objects like "Elizabeth, Cynthia, Jane and Margaret"—four graceful female forms made from the upside-down claw feet of an antique bathtub. And there are plenty of surprises: a whale's tooth, a piece of a pre-Columbian water jar, and a small iron horse from one of the 13th-century Spanish galleons that brought horses to North America.

The light-filled, white-walled master bedroom opens to the deck, where, in the summer, the Davidsons begin each day with coffee and spend evenings gazing at the distant houselights "looking as far away as stars." The large master bathroom features two separate sinks and cabinets as well as a Jacuzzi bathtub and shower. Out on the deck is another Jacuzzi from which Davidson often surreptitiously participates in conference calls. The master bedroom also opens to a small alcove exercise area featuring a "family wall" of snapshots uniformly cropped and glued to squares of wood, and well stocked with weights and exercise machines. There's a window overlooking the front yard and a television to watch, "so we have no excuse not to work out," says Davidson.

Photos of Chuck Davidson's house in Cragsmoor by Deborah DeGraffenreid.

Presented with Dharmakaya Center for Wellbeing

By Dharmakaya Center for Wellbeing