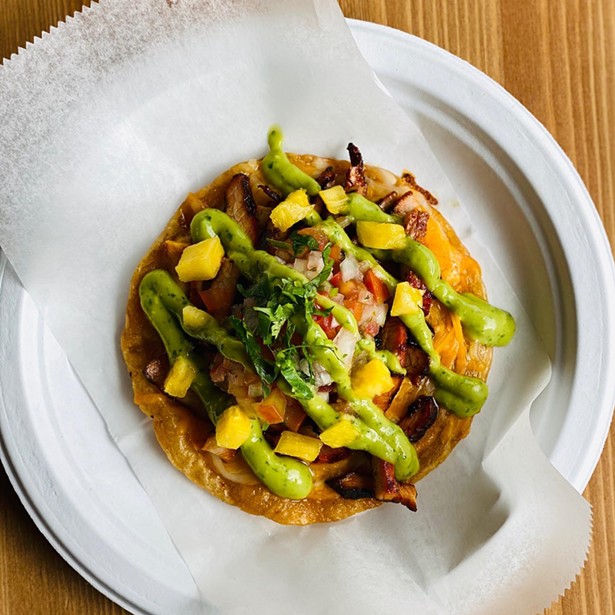 They say timing is everything—but persistence counts for a lot as well. Ruben Lopez’s long-held dream of owning his own restaurant was well on its way to becoming a reality over the winter. He had remodeled a storefront in Kingston’s Rondout neighborhood, overcome some unforeseen plumbing issues, gotten his liquor license after a series of delays, and was awaiting a final inspection from the health department on March 20 for new restaurant, The Tortilla Taco Bar.

On the morning of March 20, the health inspector said they would have to reschedule, as the county was waiting guidance from the state on how to handle inspections in light of increasing cases of COVID-19. That Sunday, Governor Cuomo ordered all non-essential businesses closed. On Monday, the county told Lopez there would be no health inspections until further notice. (A similar situation befell Tortilla Taco Bar’s crosstown neighbor, Lunch Nightly.) But in early June, Lopez got his inspection and Tortilla Taco Bar opened for business on June 23.

Lopez, a native of Oaxaca who moved to US at the age of eight and grew up in Rhinebeck, has worked in restaurants and the food industry since he was a teenager. He opened a small deli a decade ago in Kingston’s emerging North Ponckhockie (#NoPo) neighborhood, but he admits he was unprepared to run a business at that time. “I had always wanted to do something with food,” Lopez says, “but it wasn’t well planned out as far as business plan and location. And then we had a plumbing problem that closed us for three weeks and that was it. The whole time, since, this idea was in the back of my mind, of doing something in a bigger, better way that was more planned out.”

Tortilla Taco Bar is a family affair. Lopez’s brother Alex helps him run the kitchen, and his wife, Carolina, who owns her own hair salon, trained the staff and set up the front of the house. Lopez, smart man, gives full credit to his wife for helping him get the business on its feet. “There is no way I could have done this without her,” he says.

Lopez is keeping it simple to start at Tortilla Taco Bar, but the foundational element is the tortilla. According to Lopez, in Oaxaca, a working family will have tortillas that typically made by the mother of the family three times a week in a long, labor-intensive process. “Everything is built around the tortilla,” Lopez says. “It all goes on the tortilla.”

Almost everything is built around the tortilla at Lopez’s place, where he makes his own tortillas twice a week. A few words on these tortillas: Pretty darn good. Take, for instance, the corn tortillas, which are the base for the tacos ($4.50) and the Vampiros ($4.50). They have an earthy, nutty flavor which can actually be tasted in the dishes—a novelty—as Lopez uses restraint in his ingredients, allowing the fresh, clean flavors to coexist with and not overpower his tortillas.

If you’re wondering why you’ve never heard of a Vampiro, before, it’s because Lopez made it up. “On my last trip to Mexico City, one taqueria had a big mountain of meat in a volcano-shaped pile on a semi crispy tortilla,” say Lopez, who somehow, mysteriously, connected this image to a vampire. “It was different from a tostada [which is deep-fried or toasted]. It’s like when you’re cooking tacos at home and you forget one of the tortillas on the griddle and it gets really crispy.” Think of the Vampiro as an open-face taco suitable for nibbling.

Burritos ($10.95) are in the jumbo, Mission-style, stuffed to bursting with rice, brown beans, cheese, pico de gallo, and eater’s choice of the house fillings: pork al pastor, carne asada, grilled chicken, or a vegetarian filling, typically a stew of zucchini, tomato, and onion based on a traditional Oaxacan recipe. On a recent visit (for take-out), I ordered the vegetarian option. The melding of flavors was complex in a stew-like way, but firm in texture and delicately seasoned.

The tortas ($9.50) remind me of why Mexican sandwiches are better than American deli sandwiches. Order a typical deli sandwich, and you’ll get a compressed brick of sliced meat and cheese, piled high as maximum dollar value was the aim, rather than harmonious pairings of flavor and texture. Tortas are gentle meldings on soft buns as opposed to battles for ingredient supremacy on Kaiser rolls. (I mean, “Kaiser” kind of says it all, no?) One torta I tried, filled with eggplant barbacoa, was flavorful enough to set me to wondering whether it was time to finally go vegetarian.

Rounding out the menu are quesadillas ($9.95), a rice bowl ($10.95), a Mexican salad ($10.95), and street corn ($5). There’s a full bar, and Lopez also serves refreshing agua frescas ($3.95)—the hibiscus is recommended. A dining companion also enjoyed a glass of horchata ($3.95), the traditional Mexican rice and milk beverage. I take her at her word, but like the rest of Lopez's fare, it was simple, fresh, and well-executed. We'll be adding Tortilla Taco Bar to our heavy rotation taqueria list.

Tortilla Taco Bar has an intimate indoor dining room of a dozen seats and a handful of spots at a small bar; their sunny patio features a dozen well-distanced tables. The restaurant is open for lunch and dinner Monday to Saturday, 11am to 9pm.

Center for Photography at Woodstock Moves to Kingston