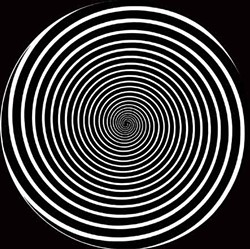 Hypnosis, demystified: More than just a party trick, hypnosis in a therapeutic setting can alleviate anxiety, phobias, PTSD, and more.

People come to hypnosis for a grab-bag of reasons. Smoking cessation. Emotional eating. Fear of flying. Achieving "flow" or peak performance as an artist or athlete. For Ann of West Hurley (who prefers to go by her first name), it was stage fright that led her to the hypnotist's chair last summer. She was preparing to have an adult Bat Mitzvah, something she hadn't done as a child and really wanted to do, yet performance anxiety was getting in the way. "I wasn't sleeping well, and it was overwhelming to the point where I was avoiding the work I had to do," she says. "Time management went out the window, and fear took over."

About six weeks before Ann's big day at the synagogue, a friend, a "very wise woman," suggested that she try hypnosis to allay her anxiety. "It never would have come into my own mind to do this," Ann says. "She made the call right then and there. I didn't have much time to think about it." The fact that her friend trusted the hypnotist, Peter Blum of Woodstock, added an essential layer of comfort. Besides, she says, "I was desperate. I was also curious."

In her first meeting with Blum, Ann felt at ease right away, and was very direct with him. "I said, 'Don't tell me to find a beach or a garden where I can feel calm, or some shit like that. It's not going to work.'" Blum didn't. He asked Ann questions and got to know her. She liked his voice.

"Somehow, in the process of talking, I started to relax," she says. "I don't know if I'd call it being in a trance; it was just very deep relaxation." Blum talked about the process she was going through and the outcome she wanted. He made suggestions for how things would go. He sent her home with self-hypnosis instructions, and he gave her a technique that involved lifting one finger as a subtle cue to relax her shoulders and release tension. She remembers Blum counting to 10 to bring her out of the "trance." "By the time the session ended, I was floating on air," she says.

Ann scheduled one more hypnosis session, recording it and re-listening to it as she prepared for her Bat Mitzvah over the next few weeks. She felt more open to doing the work, and although it still felt like a struggle, it wasn't a negative struggle. The night before the event, to her amazement, Ann slept like a baby. The day itself felt like a dream. "Not that it was perfect," she qualifies, "but it was perfectly imperfect. It had a magical quality. My family came from England, and it was a pretty spectacular day."

Tapping into the Unconscious Mind

Hypnosis in a private, therapeutic session is nothing like the stage tricks we've seen on TV. You'll never see a watch swinging from a chain, or be ordered to perform silly or outrageous acts, such as clucking like a chicken in front of a live studio audience. Trances don't always feel like trances so much as a state of relaxed awareness. People don't lose control and become the sleep-walking marionettes of a hypnotist-showman.

"There are so many misconceptions about hypnosis," says Blum, who has been practicing the modality for over 30 years, and who trains and certifies other practitioners through the National Guild of Hypnotists. "The use of the trance or hypnotic state goes back to ancient practitioners—medicine people and healers and shamans from tribal cultures from around world. They were getting themselves and people in their community into an altered state, where they could contact the vast resources of what they would have called the spirit world, but that we would now call the unconscious mind. They used it for healing."

Hypnosis success stories are mainly anecdotal, yet we're beginning to understand what's happening in the brain when people enter a hypnotic state. In 2016, researchers at Stanford University published a study that found changes in certain areas of the brain in subjects undergoing guided hypnosis sessions similar to those used by practitioners to treat anxiety, pain, or trauma. Some describe the process as going from beta (active and alert) to more alpha and theta (relaxed and dreamlike) brainwaves. The Stanford researchers also noted that some people are more susceptible to hypnosis than others, possibly standing to absorb more benefits from it.

No two people are alike, and not all hypnosis is alike either. "I gather information from people to understand what they need, because I don't use a boilerplate approach," says Blum. He uses a client-centered method known as Ericksonian hypnosis, which is more permissive than the old-school "authoritarian" style. So rather than giving commands such as "You are feeling sleepy" or "Your eyes are getting heavier," he makes suggestions. "I might say, 'I wonder if you can imagine yourself now as a nonsmoker in the future.' It's about giving the person a chance to make choices." Blum notes that most people only need two or three sessions to effect change. "This is short-term, solution-oriented work. You're addressing what you want and how you can change to get that."

Waking Up from Trauma

Some mental health practitioners add hypnosis to their toolbox because it can help people go deep quickly and get to the source of their core issues. Stephanie Kristal, a certified hypnotherapist and counselor based in Kingston and High Falls, combines hypnosis with mindfulness and cognitive behavioral therapy as a way to instigate change at the root level. "Hypnosis is a deep state, but there's nothing scary about it," she says. "It's similar to spacing out while watching a movie or becoming absorbed in a really good book. You drop below the level of the constantly chattering mind to a place in the subconscious that's more open to suggestion." Hypnotherapy takes hypnosis one step further by working with the mind-body connection and utilizing the modality of hypnosis for change, growth, and healing.

People see Kristal for a variety of reasons, including common motivators like smoking cessation, overeating, and phobias, but her primary practice is with trauma. "When we have a trauma, we take on certain beliefs about ourselves, and we have associated thoughts and feelings because of it. It forms a neural loop that we keep repeating, which keeps us locked into being unhappy and limited in our lives," she explains. "Hypnotherapy can be a process that begins to dissolve those old neural loops that are no longer serving us and are keeping us from reaching our desired states, and replaces them with healthier ways of thinking, feeling, believing, and being in our life." It's a way of flipping the switch on those neural pathways, so we're not stuck in past traumas but can move forward with empowered awareness.

When Luis Mojica of West Saugerties first came to Kristal, he was dealing with emotional fallout from complex trauma related to childhood sexual abuse. "I was having extreme anxiety, trouble sleeping, and issues in my relationship," he says. "When Stephanie explained hypnotherapy, the idea of it really worked for me. I liked how you bypassed the brain to get to the body, and I felt like I could heal faster than I would with a decade of therapy." Mojica had two counseling sessions with Kristal that helped her get to know him before embarking on a single yet powerful hypnotherapy experience. During the session, he lay back in a chair that made him feel like he was floating. Kristal held an eagle feather and told him to look at the feather while she counted backwards from 10. "By the time she hit 'one,' I was in a different state," he says. "Her voice was like a narrative force in a waking dream." People involved in the trauma entered the dream, but he felt safe and wasn't triggered. He could walk through the trauma and reclaim it, calling upon his adult self to comfort the little boy that he once was.

What felt like a very vivid 10-minute dream was a two-and-a-half-hour session. "You're in an altered state, but it's one that you are navigating; it's very much in your control," he says. "When I came out, my body felt so clear and at peace. It was like I was finally awake. The trauma had me sleepwalking for so many years. I felt like I was someone I wasn't." After the session, his anxiety vanished and his relationship with his wife deepened. He says the trauma is still there but much more manageable; he is no longer forgetting, rediscovering, and reliving it. A holistic therapist himself, as well as a musician, Mojica now recommends Kristal to his clients for everything from trouble sleeping and recurring nightmares to unresolved heartbreak or grief.

Hypnotherapy can be transformative for some people, but Kristal notes that it is not a magic wand—and it is not effective for everyone. "Whether it's the modality that works for you, no one can guarantee that," she says. "But the more that you're open and willing to develop resources and tools to help strengthen the process, the more effective it is." She is trained in two approaches: transpersonal hypnotherapy, which works on a psycho-emotional level to help people get unstuck and dissolve old ways of being, and medical hypnotherapy, which uses hypnosis to help people deal with fears and issues surrounding life-threatening illnesses and treatments. "It's not something I'm doing to someone," she explains. "I work with people to help them access their own inner wisdom for guidance. Really, the only person who can hypnotize you is yourself."

Blum jokes that he often calls the process "de-hypnosis," because the practice is about helping people wake up from the trances they're already in. "There are good trances and there are bad trances," he says. "A bad trance has a lot of limitations. Good trances are empowering trances." He once worked with someone who had to overcome the idea that she couldn't go to college, since no one in her family had done so, and not being able to go was an early hypnotic suggestion that had come from her parents. Suggestions like these can come from teachers, politicians, and the culture at large. "Hypnosis is kind of an adjustable wrench," he says. "Once you have it, you can use it for a variety of applications." Blum is also trained in sound healing, and with certain clients he might use music and sound as an adjunct to hypnosis.

Encouraged by her success with dispelling performance anxiety, Ann says she will return to Blum for hypnosis as she prepares for an upcoming surgery. She hopes it will work just as well as it did for her Bat Mitzvah. "I needed help and I was open to receiving help," she says. "When you do something like this, I think you have to be ready. I don't know if this works for everybody. In a million years, I couldn't have imagined this outcome for myself."

Peter Blum offers a "Hypnosis for Smoking Cessation" group session at the Reuner Support House (part of HealthAlliance Hospital–Mary's Avenue) in Kingston two or three times a year. The next session is April 4, from 5:30–7:30 pm. $10 donation.