The Rush of the Ride | Development | Hudson Valley | Chronogram Magazine

The Rush of the Ride

Outside a stone house in Hurley, between the front door and the driveway, the snow was packed hard into a jump. Fifteen-year-old Ever Peacock came in fast, hit the jump, and kicked the BMX bike out from under him in mid-air so it spun a circle beneath him, before he reseated for the landing. Afterward, his face completely changed. Peacock's quiet reserve turned into an ear-to-ear grin. "That was a tail whip," he says. 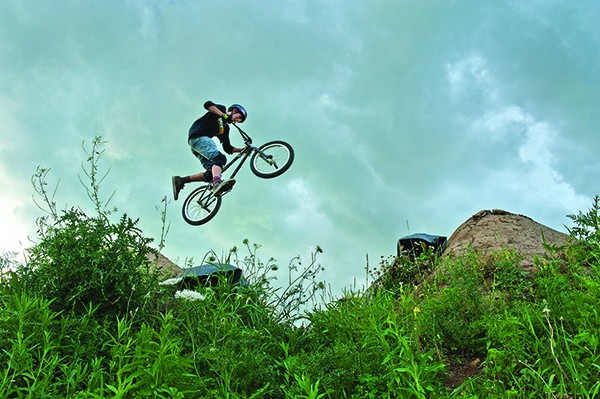 At first glance, BMX might seem dangerous. But like any sport, there's more to it. With homegrown, kid-derived roots, BMX is marked by innovation. In the late 1960s and early 1970s, kids were modifying the Schwinn Stingray so they could imitate their motocross heroes; hence, the name, bicycle motocross (BMX). It's just a single-gear bike with small, fat wheels, but what makes it special is how it's lightweight and sturdy. Kids started to catch air and land tricks while they rode. Add associations to sanction the sport, along with magazines to spread the word, and popularity mounted until BMX went mainstream at ESPN's first X Games in 1995 and won a place in the 2008 Olympics.

It's a solo focus, unlike team sports. Peacock isn't beholden to a practice schedule. "You set goals," he says. Like when Peacock wanted to learn a backflip. He'd try it and fall. Other riders gave him pointers. Then he finally landed it. His mother, the painter Nina Isabelle, feels that shows persistence. "I think it translates to whatever you're going to do later in life."

Isabelle grew up riding BMX bikes and skateboarding at a camp started by her father in Pennsylvania. With mastery of the basic skills, Isabelle would tap into a meditative state while riding. Psychologist Mihaly Csikszentmihalyi calls that state flow—the complete immersion in an activity. It can happen anywhere in life, but it does in sports three times more often, so athletes say they're "in the zone." In his 1998 book Finding Flow (Basic Books), Csikszentmihalyi contends that involving your whole being in activities of intrinsic motivation (just really wanting to do it) makes people happy. "In the harmonious focusing of physical and psychic energy," he writes, "life finally comes into its own." That holds appeal for BMXers. It's a fun escape to completely focus on the split-second decisions that make a trick possible. "It fills a human need for a lot of riders," Isabelle says.

Peacock's not out for an adrenaline rush; he prefers the solitary practice and feeling of accomplishment. But freestylers like Peacock have no real place in the Hudson Valley. Skate parks are ideal but don't always cater to bikes. The one in Saugerties, which was conceived and partially funded through the grass-roots efforts of kids who liked to ride BMX, has limited itself to skateboards due to insurance constraints.

Sometimes Peacock and Isabelle venture up to CranX, a park in Syracuse. There are different tracks, so mountain bikes and BMX can intermingle, and people take turns while riding. "I think BMX is a good sport for kids because they're learning to be in a community," says Isabelle. "There's older and younger people and different types of riding. They're still learning to interact, even though they're each working individually." Peacock says that wherever you ride, everyone talks and hangs out, even if you don't know them.

But most of the time Peacock just practices alone on the sidewalk in Hurley and in school parking lots until he's told to stop. "There's nowhere to ride around here, so you kinda gotta get yelled at," he says. "You either get yelled at or you don't ride." And not riding isn't going to happen.

All over the Hudson Valley, secret, home-made BMX trails exist on idle land. It could be an actual trail on some large parcel, or simply a series of packed dirt mounds with varying degrees of pitch, sometimes called a rhythm section. Peacock says in other parts of the country, trails mimic skate parks, catering to freestylers, but here they're like racetracks with higher jumps. A trail builder of Peacock's acquaintance is 26-year-old Sam Havranek, who says there's almost no formal structure to it; it's more about mutual respect and a common goal. "The dirt shows no favorites other than to those who give up their time and effort," Havranek maintains. "It's more than a group of friends in one town. When you're a trail builder, you have friends anywhere they stack dirt."

Kingston Point Park is Getting a Soccer Field And then Some