If you were to mark the passage of seasons in the Hudson Valley by their signature foods, fall would be all about cider doughnuts and pumpkin spice everything. Winter menus would be dominated by squash and root vegetables. And nothing screams summer like a line of people snaking around the block for ice cream. After a long, cold winter (and an endlessly rainy spring), there's nothing sweeter than that first race finish an ice cream cone faster than the heat can melt it. "Ice cream makes people happy," says Katie Ferris, owner of Zoe's Ice Cream Barn in Lagrangeville. "I love the fact that it is often enjoyed together by friends and family. At my store you will see people connecting, chatting, and unwinding from their hectic schedules."

We practically trip over ice cream joints in every town, village, and city in the valley. But among the sea of Dairy Queens and roadside stands offering mass-produced ice cream, cones, and toppings trucked in from who-knows-where, a niche yet fast-growing market for artisanal ice cream is drawing discerning sweet teeth from far and wide.

But ice cream is ice cream, right? Not if you ask the proprietors of these small-batch, high-quality ice cream businesses that attract cult followings of locals, weekenders, and tourists alike.

"It's very creamy and very dense, which is the opposite of soft serve or a scooping store, where they're pumping air into the product," says Steven Astorino, chef and owner of Zora Dora's Small Batch in Beacon, which specializes in paletas (or desserts on sticks). "We don't pump any air into our product. It's just straight up, which gives it a whole different characteristic."

When you listen to Kathryn Spata, co-owner of Nancy's of Woodstock Artisanal Creamery, describe the process of cooking, blending, and pureeing three dozen bananas with brown sugar, butter, and rum to yield one three-gallon bucket of banana ice cream, the only words that come to mind are "labor of love."

"It might not necessarily be a unique flavor—it's how we make it," says Spata, who, with husband Sam, opened Nancy's after permanently moving to Shandaken from New York City in 2015. "People recognize quality when they taste it."

The growing popularity of artisanal ice cream in the region can be directly tied to this surge in customer awareness, or what Amy Keller, co-owner of Jane's Ice Cream, calls "the food revolution." Consumers now, more than ever, care deeply about where their food comes from and how it's made, and they prioritize supporting their communities' micro-economies.

Indeed, across the board, the artisanal ice cream market in the Hudson Valley is centered on a common theme of keeping it local. With the abundance of local farms and robust selection of regional dairy, it's become easier and more meaningful for customers to seek out products made with resources from their proverbial backyards.

For Ferris, growing up on a farm in Dutchess County meant that the concept of local food was simply second nature—a way of life for her and her family.

"My father and his family had a local dairy farm until the 1960s," says Ferris, a Culinary Institute of America alumna who cut her teeth in the ice cream biz as an employee of now-defunct Heinchon Dairy in Pawling. "It was never an option to not use a local product." 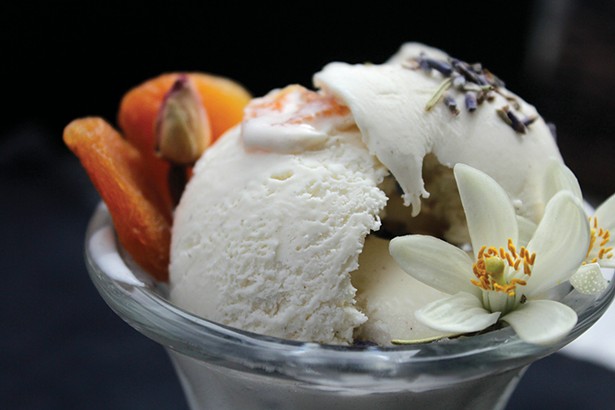 Ferris says Zoe's slogan, "From Cow to Cone in 3 Days," draws people from all over the state. She makes all her ice cream with milk from Hudson Valley Fresh, a collective of family-run dairy farms in Ulster, Dutchess, Columbia, and Rensselaer counties, as does Zora Dora's and Alleyway Ice Cream in Saugerties. Spata works with Farms2Tables of Rhinebeck, which sources thousands of local products from more than 100 farms in the region, to secure all her milk, heavy cream, eggs, and fruit. Kingston-based wholesalers Jane's emphasize their use of New York State hormone-free milk.

"It's incredible how important local is to everybody," says Keller, who started making ice cream as a restaurateur with a Kingston storefront in 1985 and, in 2005, switched gears to focus solely on wholesale with her husband and co-owner Bob Guidubaldi. "We got calls this year from two local theater companies saying, 'We were selling novelties, but we really want to go local this year. We really want to up our game.'' The attitude toward quality, artisanal—people are willing to pay for it."

Of course, ice cream isn't just about dairy. From staples like strawberry to more idiosyncratic, offbeat varieties, local artisanal ice cream makers make painstaking strides to source not just local milk and cream, but nearby everything.

Tapping into the flavors of the Hudson Valley makes for some adventurous, often out-there concoctions that range from smash hits to acquired tastes, like Nancy's sour cream cherry, goat cheese beet ice cream at Alleyway Ice Cream, Zora Dora's lavender honey ice cream with honey from Astorino's own bees, or Jane's currants and cream, made with berries from the Hudson Valley.

"I almost always have chocolate, strawberry, and vanilla, because I can just do them really well and everyone likes them," says Julian Hom, owner of Alleyway. "But then I try to have one that is an elevated version of the normal spectrum, and two others that are more far out and intriguing." Recent flavors at the Saugerties creamery include Earl Gray & Mom's Scones, Lemon Poppyseed, and Wildfire, a blend of fresh wintermint, habanero, and smoked walnuts.

"We take the basic ice cream and we step it up a notch," Spata echoes.

Of course, the major ingredients like cocoa and vanilla don't grow here in the Hudson Valley. But for small-batch artisanal ice cream makers, if it's not local, it's still high-quality, like the Tahitian vanilla Spata uses for Nancy's vanilla ice cream, the Belgian chocolate Hom sources, or the sesame seeds Keller roasts herself for Jane's new Sesame Necessity flavor.

Another distinct marker of artisanal ice cream makers in the valley is the offering of vegan options. Usually, dairy-free choices amount to sorbets—something offered at most ice cream shops these days, artisanal or not. And, hey, no hate for those—nothing cleanses the palate after dinner like a sorbet. But any vegan will tell you that while it is undoubtedly sweet and cold, it doesn't quite scratch that ice cream itch.

Prompted by her vegan dogwalker, Spata was inspired to experiment with vegan ice cream. And so, in addition to sorbets, Nancy's vegan chocolate, vanilla, and mint chocolate chip flavors were born, all made from a coconut milk and coconut cream base. Over at Alleyway, Hom is working on perfecting his dairy-free vegan ice cream using a base of homemade cashew milk, to which he can add whatever flavor combination he chooses. And at Weir's Ice Cream in Salisbury Mills, an Orange County staple since 1956, the dairy-averse can indulge in low-fat coconut milk chocolate chip (all of their hard ice creams are homemade). If gluten-free is your jam, Zora Dora's has you covered with gluten-free ice cream sandwiches, which, according to Astorino, fly off the shelves.

The word "artisanal" as it applies to local ice cream goes beyond what's in it and how it tastes; it also extends to the owners' intensive approach to quality control. From the larger and more established Jane's, which is distributed in four states, to Alleyway producing four quarts at a time in a repurposed linen closet of Hom's father's inn, these ice cream makers pride themselves on working on the front lines to ensure a quality product from farm to cone.

Might all this extra love, and extra attention to quality, add just a bit to the price tag? Naturally. Keller says Jane's could cost as much as "double the lowest brands," and at Nancy's, a single scoop in a cup will run you $3.75. The seasonal nature of ice cream also complicates the pricing structure, given the fact that many creameries close in the cold months.

But, as Spata noted, the care that goes into small-batch, homemade ice cream makes it worth the price for the customers. "When you say 'I made it myself,' people just like that, instead of saying it came from the middle of the country," says Spata. "I think people appreciate that more, and they're willing to pay for it."