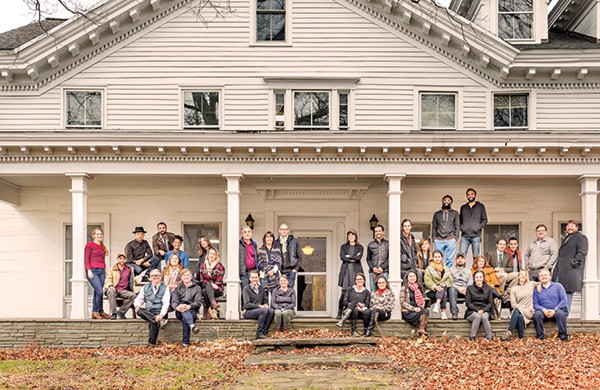 The Good Work Institute. conducts something other than business as usual.

Executive Director Matt Stinchcomb began the Good Work Institute as an offshoot of the mission-driven craft marketplace Etsy, which he co-founded with roommate Rob Kalin in 2005. Stinchcomb's idea: create a community-based economy that moves beyond profit and into purpose-driven entrepreneurship.

"What we provide to the fellows is some clarity around who they are, what their unique gifts are, and how they might actually contribute to the regeneration of their communities and their lives," Stinchcomb explains.

The Hudson Valley 2016 Fellowship wrapped up this December, and consisted of local entrepreneurs and community leaders. The professions of the 35 cohort members varied from farmers to lawyers to musicians and more, from profit and nonprofit groups. Sessions weren't confined to hotel conference rooms or Powerpoint presentations. Patagonia's Director of Philosophy, Vincent Stanley, spoke to the cohort about business decisions driven by ideals, not the bottom line. Participants made a meal together during one session. They dug in the dirt with each other. They also visited the Nature Institute in Ghent, and discussed sustainability and the importance of preserving place.

Michelle Hughes is the director of investments and partnerships at the National Young Farmers Coalition, a nonprofit that represents young farmers, sustainability in agriculture, and advocating for fair labor and inclusion of diversity in farming. Hughes heard about the Good Work Institute fellowship from Managing Director Erica Dorn, whom she worked with on a project representing immigrant farmers.

"It's sort of been a mix of concrete tools, really inspirational speakers, and also a lot of personal growth," Hughes says.

Gregg Osofsky from the Watershed Center, a nonprofit social justice retreat center in Millerton, learned of the Good Work Institute through someone he knows at Hudson River Housing in Poughkeepsie. Members of the cohort, though from diverse backgrounds, seemed to hear about Good Work through their professional contacts or through the Institute's outreach efforts.

"What I think Good Work has recognized, and is trying to connect with, is what are the real bottom lines that we are interested in as people engaged in our communities," Osofsky says, "And that extends beyond profit. Good Work is trying to figure out how you actively bring forward the other bottom lines—around equity, environmental stewardship, and justice."

Though he also heard about the fellowship from Erica Dorn, Philippe Pierre is a bit different than Hughes and Osofsky. He runs two businesses, Palate Wines and Spirits and Ms. Fairfax, a restaurant on Liberty Street in Newburgh.

The experience opened his mind to possibilities that he hadn't really considered. Guest speaker Steffen Schneider from Hawthorne Valley Farms introduced the concept of "How much is enough?"

"In my business experience, there wasn't this notion of a satiation point," Pierre says. Good Work Institute challenged that idea.

As for the difference between this business workshop model and other more traditional networking events, Pierre says that the Good Work Institute led to lasting and worthwhile connections.

"Networking events tend to be about hobnobbing, about posturing, making very superficial, self-interested opportunistic relationships. I've never gone to a one where someone would later become a friend," Pierre says with a laugh. "This is inspiring. You don't normally come back from a housing networking event inspired."

Fellows in the program are required to create a Good Work Commitments + Plan, applying what they have learned. Pierre, for his part, explains that for his "paradigm shift," he will now take a more personal approach in viewing his staff and customers. "It's not necessarily seeing people that walk in as plus-dollar signs, and people working behind the counter as minus-dollar signs," he says, "That's not who they actually are."

A new cohort for spring 2017 will run through June. A call for applications for the fall 2017 cohort will be announced in the spring.