The Question: Is geothermal the new HVAC solution?

Eighty-eight-year-old Don Lloyd wears the kind of Cheshire cat smile that can often be found on those who know they have, in some significant way, beaten the proverbial system. Perhaps it is because, on this sweltering July day, his house is deliciously cool; maybe it’s just the extra $2,500 he puts in his pocket each year that has him feeling upbeat. Either way, Lloyd—a retired engineer who has become a herald for the virtues of geothermal energy solutions—has one clear message to share: Hey, folks, this stuff really works.

Lloyd’s Germantown home is a testament to how increasingly viable sustainable energy alternatives are becoming. His book The Smart Guide to Geothermal: How to Harvest Earth’s Free Energy for Heating and Cooling (PixyJack Press, 2011) offers an opportunity for both consumers and contractors to skip the extensive research he himself had to do, and move directly to awareness. In 2006, when Lloyd and his wife began the process of selling the lovingly restored 8,000-square-foot Rensselaer County schoolhouse they called home (the complete story of which is recounted in Lloyd’s first book, the memoir Snake Mountain Trilogy), they were first introduced to the idea of borrowing power from the earth rather than remaining shackled to exploding oil prices. Finding a dearth of readily available information on the subject, Lloyd focused his considerable ability toward understanding whether a concept so seemingly simple and efficient was actually a feasible one.

What Lloyd found was that not only homeowners lacked access to the necessary information about geothermal options: Architects and builders also shied away from implementing technology that they did not understand. In actuality, he discovered, the basis of the idea is surprisingly clear. The Earth itself acts as a natural source of thermal energy; in New York State, for example, the below-ground temperature remains at a constant of about 50 degrees, regardless of the season. Using a heat pump—technology not so drastically different than that which has powered our kitchen refrigerators since the 1940s—that energy can be transferred from a subterranean water source into home heating. The water is then carried back underground to be reheated, as it were, and the process continues. For cooling, the process is reversed: The heat from inside your home is transferred to the water, which is then cooled again by the earth. No mess, no fuss, no fuel bill, and a drastically reduced carbon footprint. “I love to look out my window to see the oil trucks pass by,” Lloyd says with a gleam, “and not stop here.”

Fortunately, Lloyd is not the only one who has been working on bringing sustainable energy choices to the forefront. Since his system was finished in 2007, the federal government has implemented a 30 percent tax credit for geothermal system installation as well as other energy-efficient home upgrades. In New York, incentives, options, and information can be found at www.nyserda.org.

Don Lloyd will be lecturing on geothermal options at the Germantown Library on Sunday, August 7, from 2 to 5pm. 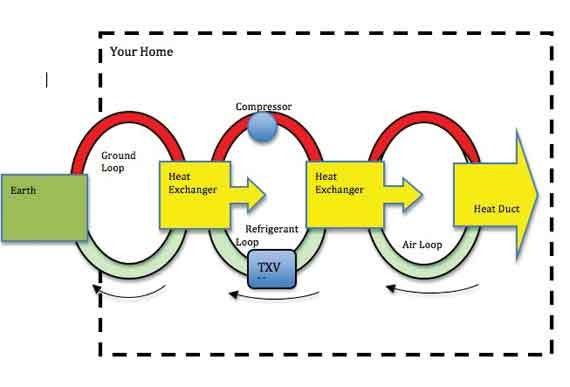