The Pride of Rosendale 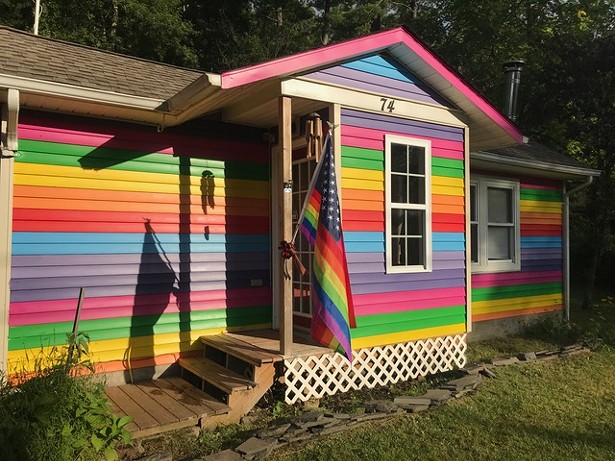 On July 31, 2017, Rosendale resident Angelina Bouros received her first piece of hate mail. The unsigned letter contained threats to her person and her property. “I think what set this person off was the pride flag,” explains Bouros, who is a regional manager for a local healthcare company and the contractor-owner of “Hudson Valley Handygirl.” Alongside the American flag, Bouros, who is transgender, had recently hung the rainbow-striped flag of LGBTQ community in front of her Rosendale bungalow. “[He or she] seemed incensed that the pride flag was anywhere near the American flag,” remembers Bouros. “They didn’t like that I’d displayed my allegiance.” But Bouros didn’t remove it.

“I have gone through so much to get to this point in my life, where I am happy and comfortable in my skin,” she explains. “Nobody—and I mean nobody—is allowed to stand in the way of my being true to who I really am.” The hate mail didn’t stop, however. Bouros received three more threatening letters and then, in summer 2019, the harassment escalated into violence when she found her cat Rambo killed and dismembered.

“I have a lot of trans friends who this would really put a lot of fear into,” Bouros explains. “But I won’t allow a bully to ever alter who I am.” Inspired by the rainbow-painted house next door to the Westboro Baptist Church in Kansas, she decided to transform her entire house into one large pride flag. Instead of hiding, Bouros “pushed right back” and decided to throw a painting party.

She put up signs around town and posts on social media, explaining exactly what was happening to her and exactly what she planned to do about it. Bouros then invited the local community to come over and help her paint. The positive response she received astounded even the resilient and optimistic Bouros.

First, the owners of the local Herzog’s Home Center heard her story and donated the house paint. On the day of the party—September, 7 of 2019— “I thought maybe 50 or 60 people would show up,” she remembers. “But people just started showing up; then more and more came.” The majority of attendees were strangers to her, but they’d heard her story and wanted to help.

“They wanted to participate and show their support,” she says. “Everybody was upbeat and positive—total strangers were hugging one another—it was just fantastic. We had live bands, we had food, there were tons of kids here: It turned into a block party.” Bouros estimates that over 200 people came by through the course of the day, sharing food, listening to music and, of course, helping her paint.

After the party, new letters started arriving. They were from the greater Hudson Valley, and even from other parts of the world; most were from total strangers and all expressed admiration and support. Bouros even received a large white envelope filled with bright construction paper valentines from students at Pine Bush High School. As one letter put it: “It’s your house and it’s beautiful. Thank you for turning it into something that inspires, delights and empowers us all.”

“Somebody just felt inspired to just let me know how I inspired them. People like this actually inspire me to be more inspired,” says Bouros. “This is how change happens. You take something that's horrible and you don't want it to be in vain. Hate has no home here. Someone’s hate is not bigger than our love.”