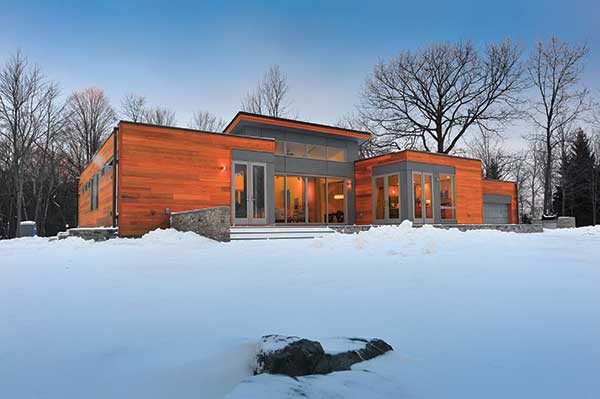 When most people think of modular housing, the first thing that comes to mind is neither luxurious elegance nor sustainability. Blu Homes, a company that just unveiled its "Breezehouse" model for the first time on the East Coast, is aiming to expand minds by pointing out the advantages of having your eco-friendly architect-designed dream home produced in their California factory and unfolded on site, complete with Energy Star appliances and eligible for LEED Silver certification.

Developer Neal Costa partnered with the Blu crew to plan a dedicated development in Copake in Columbia County, and the Breezehouse already constructed would seem to embody design values long popular in choice Hudson Valley spots: Simple clean lines that don't try to upstage the landscape, lots of glass to bring the outdoors in. The three-bedroom house on 24 acres is on the market for $1.6 million; the basic Breezehouse model, exclusive of land or extras, starts at $540,000. Blu Homes' eight design variations range from studios and cottages to four bedrooms.

An online "3-D Configurator" lets prospects choose a design and select preferred finishes before speaking with a consultant, who will help create a site plan to maximize solar-readiness. For an additional fee, Blu will assume the role of general contractor and manage the site prep and permitting aspects of the experience. The end result, framed in structural steel, features eco-friendly metal roof, high-performance insulation, and low thermal-emissive gas filled-windows; energy savings can reach 70 percent.

Besides reducing your carbon footprint (trucking a complete home across the country may seem inefficient at first glance, but consider the many, many local hauling trips required for conventional construction), the heavy gauge steel framing incorporated in Blu Homes modulars is advertised as able to withstand "infrastructure challenges" such as hurricanes and earthquakes. Besides the unveiling of the upstate Breezehouse, the company held an "After Sandy: Rebuilding with Blu" event in Morristown, New Jersey late last month.

"Our buyer was actually the one who discovered Blu Homes and traveled out to San Francisco to watch the factory process," says Nancy Felcetto of Halstead Properties, the brokerage handling the Breezehouse debut. "The Blu Homes people are very creative and responsive—they listen well. And it's fun being the first kids on the block to do this.

"We work with a lot of people looking to relocate here either full time or in second homes, and then there are people looking to downsize," says Felcetto. "We think a lot of those people might be intrigued by the Blu Homes concept. We've all seen modular homes before, but nothing like this—the building process is about a year shorter than stick-built and very clean, yet the house feels incredibly solid."

It's long been the dream of many East Coasters to import this light and airy Californian home. But the Breezehouse is still unaffordable for most. We can dream, but this modern prefab is not yet a dream come true.