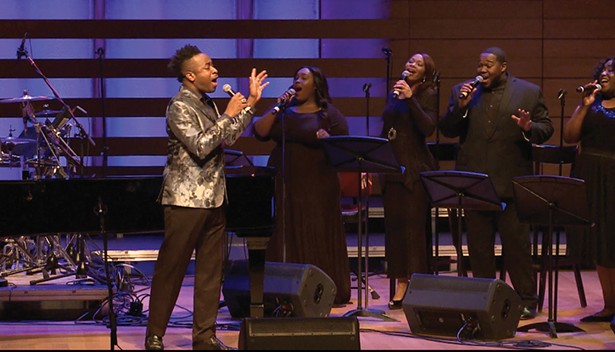 A key part of the Western musical tradition, opera is an art form that's, unsurprisingly, associated mainly with white artists and white audiences. But, as with so many aspects of culture and society, opera's history has its share of vital black performers, patrons, and parallels. With this in mind, the Phoenicia International Festival of the Voice, which celebrates the power of the human voice in music, is honoring African American artists and African-related themes as part of its milestone 10th season this year.

Amid more standard Western fare, the festival, which takes place the weekend of August 2-4, includes "Lady Parts: Music of the Abolition Movement" (August 3); "Music of the African Diaspora" (August 3-4); a production of Donizetti's "L'Elisir D'Amore (The Elixir of Love)" featuring an all-African American cast (August 3); and a program of excerpts from Scott Joplin's opera "Treemonisha" reimagined by Houston Grand Opera composer-in-residence Damien Sneed. We spoke with the festival's general director, Maria Todaro about this year's programming. Phoeniciavoicefest.org.

Congratulations on the 10th anniversary of the festival! What are some of the most significant ways that the event has changed and grown over its first decade?

I would say the most important progress has been in our logistics. We've learned to become more hospitable and serve better and, by doing so, have created a real model that other companies around the country follow. We focus on the experience that our patrons and artists will live more than selling tickets to shows. We've developed partnerships and collaborative efforts with many arts and social justice organizations to make the art relevant. We realized that in order to build audiences we had to really be among them, to listen and make opera non-threatening. We discovered that opera has a bad reputation because it is often expensive and perceived as stiff, pompous, or reserved for the elite. We have tried to become advocates of this art form, to make it accessible, fun, and family-friendly.

This year the festival is honoring African American artists. How and why did you and the other organizers come to select this as the theme?

Opera has the reputation to be written by white people for white people. We have so many extraordinary friends from different backgrounds and cultures who've chosen this art form as a profession but, because they "don't fit a look," are not working as much. Diversity is very important to us because it makes opera relevant, modern, and more accessible. There are so many exceptional African American artists in the world nowadays that don't get as many opportunities because of tradition, but what better way to create opportunities that by reimagining these masterpieces?

One of the attractions at this year's festival is the production of "L'Elisir D'Amore," which has been transported from the Italian village of Donizetti's original opera to a Ghanian village. How did this idea come about?

I wanted to create a different take on that operatic comedy. We had a huge conversation about diversity and the difficulties our colleagues from different ethnic backgrounds can face in our industry. We're not only changing the location [of the story], but there will be many surprises for the aficionado, as we're also changing the motivations of the characters somewhat and adding fabulous African drummers and dancers. The idea is to cleverly blend the African drumming and the symphonic orchestra, which has never been done. The recitative will be accompanied by a kora (West African lute) and punctuated by drums. This particular opera is perfect to adapt to this context.

We would love to continue to be a cultural destination, grow our audience, expand our programming, develop our partnerships, create more jobs, and become a real source of pride for our region—a personable, hospitable, entertainment event where humans connect, laugh, and share the music.

Phoenicia International Festival of the Voice Returns to Parish Field