The Phoenicia International Festival of the Voice

Climbing to a Crescendo 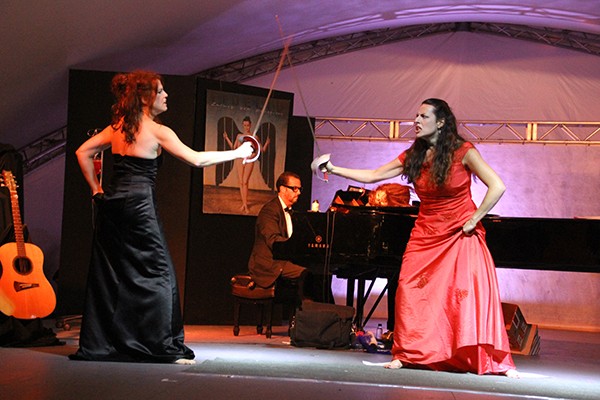 The Phoenicia International Festival of the Voice started with a simple goal: to raise money for a local playground. Cofounder Maria Todaro and a team of volunteers spent weeks planning an assemblage of distinguished opera singers for their outdoor concert. Mother Nature had other plans. Rain. Buckets of it. However, the weather didn't deter the crowds—they just brought their umbrellas. "If 500 people show up to listen to opera in the pouring rain, you know it's something you need to keep going," says Marketing Director Carol Urban. "I wouldn't even have done that!" Todaro says with a laugh.

Since then, despite what the two describe as a recurring theme of stormy weather, the festival has grown to a four-day event with over 22 performances, drawing crowds whose numbers exceed even that of Phoenicia's population. "We never know what to expect," says Todaro, "but this year we're preparing for an audience of 10,000."

The majority of the performers might best fit into the classical music genre, though Urban thinks the label is an antiquated one that fails to capture the spirit of the festival. "I hate the term 'classical music'—it's covered in cobwebs," she says, "Listening to things like Verdi's 'Requiem' is absolutely beautiful and alive." Giuseppe Verdi's "Messa da Requiem," a 90-minute work, will conclude the festival on August 4, staying true to traditional opera and all its challenges. Over 100 voices from community choruses accompanied by a full orchestra will supplement lead vocalists Todaro and Eduardo Villa. They will play and sing up to eight lines of intricate music at once.

Throughout the weekend, performances will also expose audiences to Gospel, world, choral music, oratory, and more. Every day, opera dramaturge Cori Ellison will start the morning with a Latte Lecture at Mama's Boy Coffee Shop. Ellison will discuss some opera history and contextualize the performances of the day, which will include Cantor Jacob Mendleson, pianist Justin Kolb, and Alfred Walker, on August 2, and Story Laurie, the Phoenicia Community Chorus, and the Woodstock Community Chorale the following days. Among Urban's personal favorites is the Cambridge Chamber Singers, a group specializing in Medieval and Renaissance music, who will perform on August 3. "You can practically see the tips of their angel wings as they sing. They have come to us before and they are absolutely adored." Appropriately, these cherubic vocalists will be performing in the town's St. Francis de Sales Catholic Church, adding to a long list of locations the festival's talents will frequent. "We have events both on the main stage, in local churches, the train station—and if we could find a mouse hole somewhere, we'd play there too," Urban jokes. "The idea is that people can wander from one place to another and pass by cafes and shops, which is great for local business."

The ability for Todaro and her colleagues to help the local economy is one that she insists comes from the act of singing itself. "When you share wonderful music with others, it's soothing and balancing," she says. "There's a social healing that happens." Singing, Todaro maintains, is the answer to many of life's troubles. Feeling sad? Sing. Need to relieve stress? Sing. "It is very physical, because singing requires a lot of breathing, and you are using the same muscles which are your relaxing muscles. The muscles you use to yawn, or sigh—you use these to sing," she says. This year, there will be a session on August 2 where anyone can come and try it. Todaro explains, "The whole emotion, the harmonies, everything—we're offering that to our audience. They will have another level of appreciation knowing what it takes."

The Phoenicia International Festival of the Voice takes place from August 1 through 4 along Main Street. They will also be offering Working with the Masters, a musical program for kids ages eight to 12 from July 22 through 26. Children will learn stage combat, dance, vocality, and various instruments, culminating in a final performance. Visit the event's website for more information about this program and for a full calendar of festival performances. (845) 688-1344.