The Other Tri-State Area: Millerton & Amenia 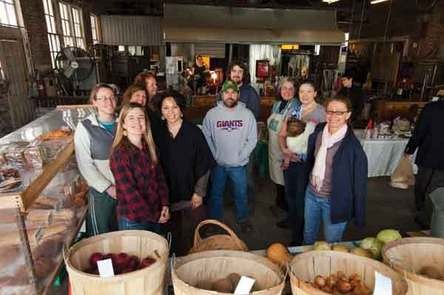 On a typical Saturday afternoon on Millerton’s Main Street, license plates tell the story of this village’s snug panhandle location. There are equal parts Connecticut and Massachusetts, with a more ample percentage of New York. This Tri-State trifecta serves Millerton’s businesses well.

Take, for example, the crowded Harney & Sons tasting room where rows of smartly packaged tea tins line the walls. The scope of varieties is exhaustive, while the price range reflects purity and scarcity. A four-ounce box of Earl Grey is an affordable indulgence at $6.50, while the same serving size of top Ti Quan Yin would fetch $85.
“Just like no one was an expert in wine 30 years ago, the same thing has happened with tea,” explains John Harney, master tea blender, founder of Harney & Sons, and patriarch of the family that moved to the area from Pittsburgh in 1957. “There’s still a lot of growth ahead in the specialty tea and coffee industries.”

To encourage a proper knowledge of tea, Harney & Sons presents a tasting flight of themed teas every weekend. The honey flight features three glass orbs filled with multihued liquids warmed over tealight candles. The selection includes Assam golden tips, Unnan golden tips, and Elyse’s blend, named for the two Elyses in the Harney family. The server graciously offers tea trivia as you slowly sip each to make sense of the honey notes.

“Tri-State” branding is actively promoted by a chamber of commerce serving not only Millerton and Amenia, but also Salisbury, Lakeville, Falls Village, Canaan, the Cornwalls, and Sharon in Connecticut, and the Massachusetts towns of Ashley Falls and Sheffield.

Martha Reynolds, owner of the Simmons Way Village Inn, is an enthusiastic vice president of the Tri-State Chamber. She’s also a de facto Millerton ambassador, advising her guests on local activities. “There’s so much to do here, from riding bikes on the Harlem Valley Rail Trail to working out at the North East Athletic Center, or playing tennis—for free—at the Hotchkiss School or the Webutuck School.” 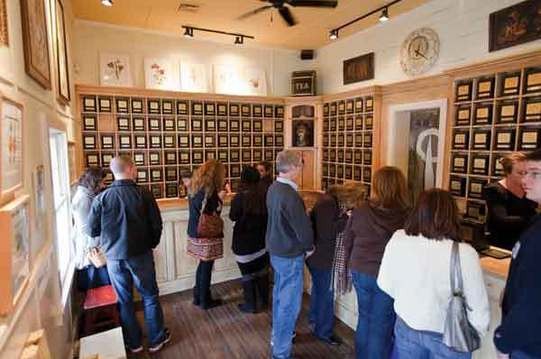 Millerton’s dining and retail offerings reflect a harmonious blend of stalwart businesses that have anchored the community for decades, and newer shops—like Gilded Moon Framing—that have invested in the renovation of historic buildings. Connecting them is a pleasant stretch of sidewalk; 3,500 feet of which will be replaced this year under Mayor John Scutieri, recently reelected for a third term.

Gilmor Glass is among the intrepid with many years on Main Street. So is the Moviehouse, the independent theater transformed in the early 80’s from historic theater into a three-screen venue showing first-run films. Then there’s Saperstein’s, established in 1946, an old-fashioned clothing and shoe store. Even older is Terni’s, which opened in 1919 as a place to shop for hunting gear and fishing tackle. At the marble ice cream counter, the 1930s mixer is still called into service to make milkshakes.

Oblong Books & Music is another mainstay, which for 35 years has offered an eclectic selection via an unapologetically independent business model. Since 1990, the store has occupied three floors of an 1880 building with the charm of creaky, time-warped floorboards. While owner Dick Hermans pays homage to the long-standing storefronts which have survived through Millerton’s “grittier” times, he also gives credit to the new businesses that are transforming the village. “It seems like a third of the businesses here have opened within the past three years,” he observes. “It’s brought a lot of energy to Millerton.”

While the economy has taken its toll on booksellers, Oblong is pacing along, helped somewhat by internet sales, adding a dedicated space for the sale of toys and games, and by the fact that the building is owned outright. Dick’s daughter Susanna runs a second location in Rhinebeck, and it’s her youthful drive that gives Dick a “whole new energy” for the business. Susanna is the main stakeholder in Oblong’s future.

Amenia, Adapting
Bill Wetmore, the owner and chief winemaker at Cascade Mountain Winery in the neighboring town of Amenia, is also looking to the next generation to steer his business into the future. In the spring of 1972, Bill and his family of five chose a spot in the Berkshire foothills to plant their vineyard. At the time, “no one thought anything was happening east of the Taconic [Parkway],” he recalls.

The Hudson Valley is the oldest commercial grape-growing region in the US. Still, when the winery opened in 1977, it joined a regional collection numbering fewer than 30 vineyards. The grapes were pressed and distilled on premises to create an award-winning collection. Word of the wines spread, and a popular restaurant opened there on weekends to critical acclaim. 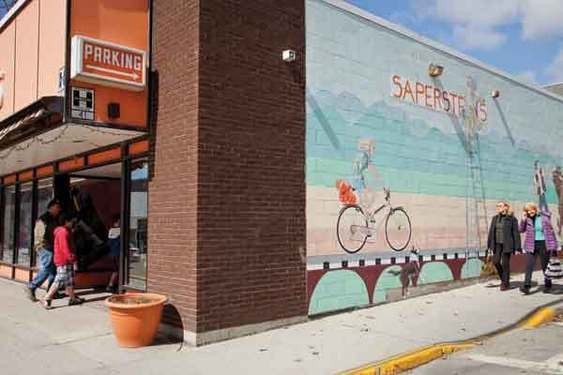 Over time, it became cost-prohibitive to run the restaurant, so the space is now used exclusively for special events. When the 30-year life cycle of the grapevines came to an end, Wetmore decided to instead buy them from other vineyards across the state. Cascade’s line of seven table wines now includes Seyval blanc and chardonnay whites, Beaujolais and cabernet sauvignon reds, a rosé, and a spice wine.

Customers from across the region still visit the wine and tapas bar on weekends for tastings and picnics. Now, Wetmore is counting on his children to continue his nearly 40-year legacy. His “dot-com” son will extend the winery’s reach into cyberspace. There’s also talk of reopening the once celebrated restaurant this summer.
Peggy McEnroe has also adapted to a new world of consumerism. That is, she’s mastered the use of the cappuccino machine, which sits atop the counter of her new eatery on Main Street, Back in the Kitchen. The cozy space occupying the bottom floor of a restored 110-year-old farmhouse opened just a year ago, in what many would say wasn’t the best time to launch a new business. But on a recent Saturday afternoon, a local couple finishing their meal thanked McEnroe just “for being here.”

McEnroe, who mastered her barista skills at the Irving Farm Coffee House in Millerton, also brought her penchant for baking. Her scones are the top-requested items on the menu. She points out that local tastes are more sophisticated than one might assume. “When we offered both turkey and hummus sandwiches for lunch, demand for each was split down the middle.”

A few weeks after Back in the Kitchen opened, Andrea Salvatore opened a take-out food shop upstairs. Pasta di Casa sells fresh, homemade pastas and ravioli in several flavors, from butternut squash to gorgonzola and ricotta. Word is getting out, attracting customers from over 30 miles away. This spring, the pair will break ground for a garden in the back for a ready supply of lettuces, herbs, and tomatoes. What they can’t grow, they source locally.

Amenia is evolving in other ways as well. A year round farmers market launched last May to a supportive local base. The Silo Ridge project is moving forward with the promise of transforming a former dairy farm into a world class housing development and resort. Serge Madikians’ Serevan restaurant is again in the spotlight, resulting from his nomination for a James Beard award for Best Chef in the Northeast.

Headquartered in the town’s former school, the Indian Rock Schoolhouse is a nonprofit running a number of community programs, like the annual Garden Day and the September Picnic in the Pavilion. The restored 1858 landmark is becoming a focal point of local social and education programs, while remaining a cherished symbol of local history.

The Linear Link
While Millerton and Amenia differ in size and personality, the common thread between them is covered in asphalt. What was once the Upper Harlem Line of the Penn Central Railroad adopted its new life in 1996 as the Harlem Valley Rail Trail. Regardless of season, locals and visitors alike take to the almost 11 paved miles connecting the Millerton trailhead off Main Street to the Wassaic trailhead at the Metro North station. Another eight miles of abandoned rail bed are in development. Another 23 miles have been acquired in Columbia County, which will lead the trail north into the Village of Chatham. 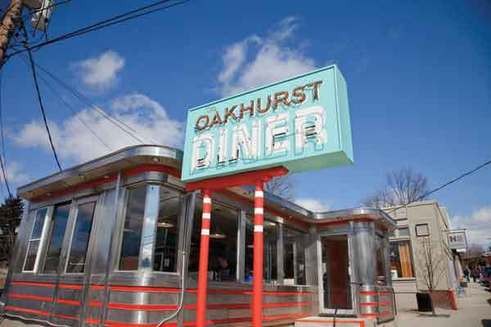 The trail is a joint effort between the Harlem Valley Rail Trail Association, the NY State Office of Parks, Recreation and Historic Preservation, the NY State Department of Transportation, Dutchess County, the towns of North East and Amenia, and the village of Millerton.

Lifelong Amenia resident Vicki Benjamin is the treasurer of the Harlem Valley Rail Trail Association, and an avid user. “The trail is beautiful, it’s great exercise, and many people have told me getting out there is important to their health and psychological well-being,” she says. The community appreciates the resource, and volunteers are easy to find for the “Adopt a Trail” maintenance program. Benjamin comes from a family with roots in dairy farming, and has witnessed the town’s progression toward horse farming and tourism. She’s raised her family in Amenia. On a nice day, you can find her on the trail, enjoying a bike ride with her grandson.

The Millerton Inn: Farm-to-Table with a Greek Flare