There were three articles in our first issue, and one of them was about food ("Five Myths of Brussels Sprouts" by Lee Reich). We're obsessed with food, and we've spent the past 20 years fussing over it and chronicling the rise of what has become the world-class food culture of the Hudson Valley, where the farms, restaurants, wineries, distilleries, and breweries complement the natural beauty, creating a regional culinary identity beginning to rival Napa or Tuscany.

It begins with John Novi, the father of New American cuisine, whose Depuy Canal House put the region on the map in 1970 with a four-star review in the New York Times. It includes the family farms that stretch back generations and form the backbone of the local economy. It encompasses the hundreds of restaurants owned and operated by passionate chefs. The Culinary Institute of America has played an influential role, providing the region's restaurants with competent graduates and pushing the culinary conversation forward. The region's wineries have been patiently building a wine culture for 40 years. Don't forget the food trucks and the artisanal producers—chocolates, pickles, maple syrup, bread, vinegar, etc.—that now form a sizable cottage industry.

We've covered it all, from foie gras to raw food, sous vide to sukiyaki, grass-fed to grain whiskey. One of the great pleasures of living in the Hudson Valley is witnessing the continuing development of the food culture, engaging in its debates, and sampling it at every opportunity.

Brian K. Mahoney is the editorial director of Chronogram.

Our visit to Hudson Valley Foie Gras in Sullivan County, the world's largest producer of this ethically challenged delicacy. John Novi of the Deput Canal House summed up the divided sentiment of local residents nicely: "I have many vegetarian items on my menu, as well as a lot of fish and seafood. But I also serve foie gras. It is a delicacy that people love."

The Butcher's Conscience Jennifer May, 11/05

Before Josh Applestone was posing in his meat locker for national magazines, before Julie Powell's Fleisher's-training memoir Cleaving, before the expansions into Rhinebeck and Park Slope, before the artisanal butchery boom, Fleisher's was a quaint shop on a side street in Kingston run by an idealistic couple (one a former vegan) who spun a business out of their desire to eat the healthiest, most humane, and most sustainably farmed meat.

From Jennifer's May's profile of the man who started New York's small-batch distillery boom: "Ralph Erenzo stumbled into the whiskey trade. After purchasing a 36-acre parcel in Gardiner in 2000, complete with historic farmhouse and 200-yeard-old gristmill, his neighbors blocked his every attempt to develop the climbing, camping, and bunkhouse concept he had imagined. So he turned to booze."

When Neal Rosenthal published a memoir of his 30 years of importing small-batch European wines, we thought it prudent to travel out to his home in Pine Plains and drink with him. Rosenthal served an exquisite 1992 Pouilly Fuissé. Rosenthal's comment on the wine: "This is about understanding that if you're not exposed to what this can be, then you'll never be able to hope to bring it into your life."

When two foodies collide. Rich Reeve of Elephant goes to our food editor's house for an all-day session of cooking off-cuts of meat. Why? Because it's tasty and righteous. Reeve says that there are only two things about meat that matter: "You need to know where it comes from and you need to eat the whole thing. As carnivores, we owe it to the animal and the people who raised it properly." 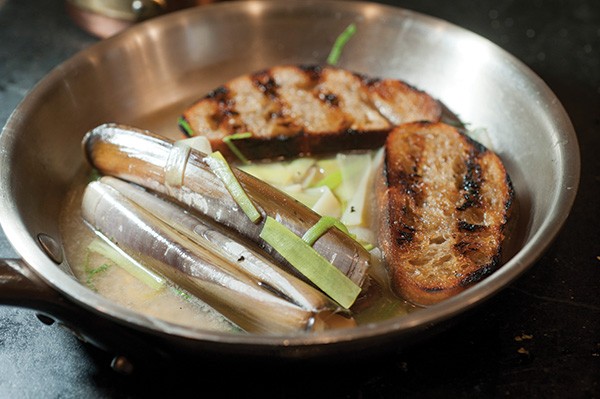 Twenty years from now, perhaps the opening of Zak Pelaccio's Fish & Game will be viewed as the moment when Hudson Valley food culture jumped the shark. Or, as Peter Barrett remarked in his profile, "Why Hudson Is Hipper than Your Town." With the only option a seven-course tasting menu for $75 and few bottles of wine under $50, this is indeed rarefied air.

Special thanks to our sponsors