In addition to the classic American and Polish fare, Stough also offers a dozen weekly specials that change with the seasonal harvest. Currently, the delightfully fresh and tangy spring salad ($11) with watermelon radish, shaved fennel, strawberries and marinated chickpeas in a lemon poppy vinaigrette is a must-try—even for those wary of mixing fruit with greens. Another worthy special is the savory shrimp noodle bowl ($22), made of blackened ginger and star anise broth, gulf shrimp, vegetables, fried egg, garlic chili paste, cilantro, and lo mien noodles.

Vegetarians might be surprised that the nonmeat options are some of the most popular dishes on the menu, including the crispy Brussels sprout chips ($9.50), which are sprinkled with truffle oil and parmesan cheese and practically melt in your mouth, the lightly fried cauliflower wings ($11.50) smothered with "secret" Buffalo wing sauce that renders the cauliflower crunchy on the outside, soft on the inside and spicy, and the vegetable-and-quinoa-stuffed peppers ($17.50) drizzled with arugula pesto and goat cheese crumbles, the vegetarian alternative to the golabki. 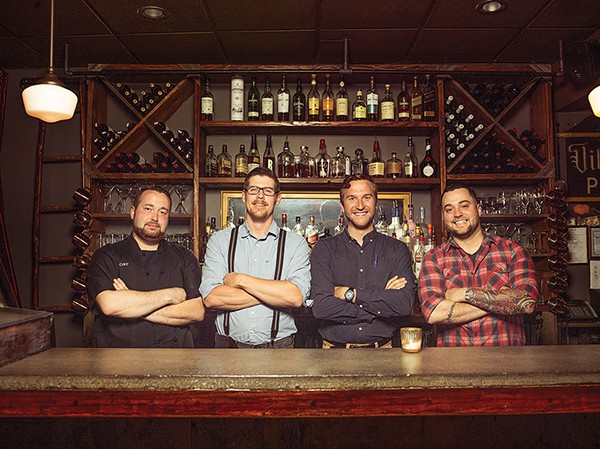 While the Polish meats are sourced from Greenpoint, Witka and Stough take pride and considerable care in sourcing locally as much produce and spirits as possible. To bolster mid-week business, they also offer daily special deals: "Beer and Basa Mondays" offers a craft micro brew and kielbasa sandwich for $10; on "Taco Tuesdays" you can get $5 gourmet taco and $5 margaritas; "Wine Down Thursdays" features half price on select wines (currently French rose is a hot ticket item).

When it comes to alcohol, The New York Restaurant offers a decent if limited selection of wines ranging in price from $7 to $12 per glass, with domestic wines from California and Washington State, and international wines from New Zealand, Italy, Chile, France, and Argentina.

Since opening a year and a half ago, The New York Restaurant has seen a steady growth in business, especially Thursday through Saturday nights when the place is packed with both local clientele and out-of-towners. On these busy nights, as well as on Sundays' Live Jazz Brunch series, Witka, along with her brother and main host Mariusz, can often be seen going table to table warmly greeting guests. Sometimes she even dons an apron to help Stough behind the line.

What's nice about the NYR is there's something for everyone—a rich and satisfying meal (with plenty of leftovers); live music (on the weekends) by acoustic soul, indie singer/songwriter performers like Murali Coryell, Lex Grey, Jen DuBois, Becky Pine, Michael Louis, and house band The Compact; and a lively bar scene.

Natasha admits she was scared when she bought the building because Catskill was so incredibly quiet then. "There were days when we were doing construction when it was like a ghost town," she recalls. But Catskill has come a long way since The New York Restaurant opened, with several other new businesses scheduled to open this summer and more people visiting and shopping in the village, in part due to the increase in traffic brought in by The New York Restaurant. "We're excited to be at the forefront of Catskill's evolution," Witka says.