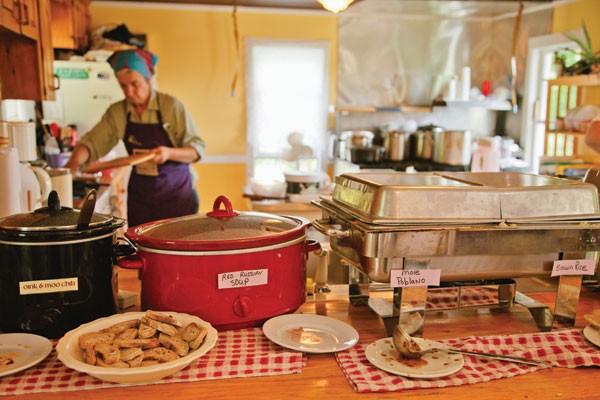 The Menus
Forget seasonal. Menus at farms with tables are of the day, in medias res. “In many instances,” says farmer Cheryl Rogowski, of Rogowski Farm in Pine Island, “I will have harvested the vegetables for the dinner myself that very morning. If the deer ate the carrots last night and carrots were on the menu, the chef needs to change the menu at a moment’s notice.” Denise Warren of Stone and Thistle Farm in East Meredith lets the farm talk to her when planning the menu for her restaurant, Fable, taking mental notes as she does farm chores. “I was weeding the cucumbers in the garden the other day, thinking about the feta cheese from Linda Smith [of Sherman Hill Farm] and the blueberry jam I had to make from the quarts of just-picked blueberries. By the time I got to the kitchen, I had already put together blueberry, cucumber, and feta salad.”

At Soons Orchards in Middletown, Sharon Soons and her crew of teenaged staff close the farm market at 6pm and “transform the store into the dining venue in an hour and a half—quite a whirlwind, sometimes a bit chaotic but always fun,” says Soons.

Most on-farm meals are seasonal—either weekly or monthly, in season from June through October or November although there are some on-farm dining options available throughout the year. At Fishkill Farms Farm Store, storage crops like potatoes and squash transform into white pizzas and soups during the winter months. At McEnroe Organic Farm in Millerton, greenhouses extend the growing season and livestock is a year-round operation that guarantees that the deli case always has McEnroe’s own roast beef and ham and fresh greens and vine ripened tomatoes (from May through January). In winter, “fresh greens and vine ripened tomatoes really make a difference in a sandwich or salad,” says McEnroe’s Suko Presseau.

Most of the on-farm fare is regional American cuisine although some farms offer authentic ethnic dishes. The menu at Love Apple Farm in Ghent is Mexican, Cocina de Leticia made by an in-house Mexican chef. Offerings include tacos, hot tamales, tostadas, and cucumber soup alongside pies à la mode and ice cream sundaes.

Farm Assets
Second-generation farmer Rogowski created Black Dirt Gourmet 15 years ago as a way to “educate folks as to what the produce from the farm tasted like, what was in season, and how the vegetables grow. Finished products help to extend and enhance the value of the vegetables of the farm.”

Farmer Denise Warren cites cooking as one of her personal assets. “Customers were urging me to prepare the foods—bacon marmalade, blueberry-bacon barbecue sauce—that I was blogging about to sell at farmer’s markets.” Stone and Thistle Farm was already raising animals on pasture, selling at farmers markets, and at their on-farm store so preparing and serving food was the natural evolution of their business.

Before opening the Bee’s Knees Café, Farmer Carol Clement of Heather Ridge Farm in Preston Hollow sold the ingredients at her farm store and hoped the buyer did a good job with them at home. “There is great satisfaction for me in presenting delicious finished dishes based on the products we have created here, showing off how good the products are.”

The Harvest Grill at Pennings Farm Market in Warwick is an opportunity for the farm to support local farms by using their produce as well as Penning’s own in their menu. The Apple Grade Pub, open since 2010, is a craft beer bar. Seventy percent of the beer served is from New York State. Hard cider crafted from Pennings Orchard’s own apples is also served. For local orchards, apple cider is a seasonal asset that transforms into delicious value-added goodness—the apple cider doughnut.

Education
On-farm dinners inherently educate dinner guests and reconnect people with the natural rhythms of food. Although Rogowski was raised making pickles, freezing vegetables, using every bit of the harvest, she sees “the need and desire from folks who want to get more in touch with their roots, learn how to grow, prepare, and preserve their own food.” Since 2008, Rogowski Farm has served breakfast. In 2010, they initiated a monthly Supper Club. Supper Club chef Heather Kurosz believes that dining in situ is “farm-to-table eating in its purest form. During breakfast, diners are seated at tables in the barn and may actually see the field crew harvesting vegetables for dinner.”

The farm dinners at Soons Orchards usually begin with farm updates, lessons on pruning, and other behind-the-scenes farm information. Chef Shawn Hubbell demonstrates each dinner course. On occasion, Hubbell’s wife Laura, a nutritionist, shares information on foods that are included in the evening’s meal. Audience participation is encouraged. “One night,” says Soons, “we had a selection of possible new apple varieties and asked people to chose what they would plant and why.”

Information exchanged and education goes both ways. Reservations at Rogowski Farm’s Supper Club are random but “the conversations produce the most amazing and strangest connections among the folks gathered at the table,” says Rogowski. “They ask questions about the land, seeds, and growing techniques. There is such a sharing of information between guests and farm staff—by the end of the evening the camaraderie is buzzing.”
McEnroe Organic Farms features an educational demonstration garden and self-guided farm walk for people interested in farm practices or wanting to enjoy fresh air and the farmscape.

Social Time
Long hours and hard work are the hallmarks of farm work. For farms in more rural areas, the work can be isolating. Carol Clement farms in a remote corner of Greene County and while her customers travel a distance to the farm store, “the Bee’s Knees Café has created a casual social life for us here on the farm,” says Clement, “which has really been a plus for all of us who work here and don’t get off the farm much.”

Guests at Fable sit at one long harvest table, providing ample opportunity for conversation. Warren enjoys “watching people make new friends and sharing their life stories and experiences.” Guests have keen interest in the food and its preparation. “I love the enthusiasm our guests have about the ingredients—the kind of beet I use, where the goat cheese was produced, and how I came up with combining flavors, textures, and colors.”
Soons recollects how her dad, 79-year-old Art Soons, loves the fact that dinner guests seem truly interested in the orchard’s operation and challenges. “I think for a long time he felt very alone and unappreciated, but now, with the local food movement seemingly here to stay, it’s quite a refreshing change in attitude toward farmers and growers.”

Saturday, September 29, Rogowski Farm hosts their second annual Harvest Festival. The origin of the initial festival in 2011 was “in many ways a celebration of the harvest that wasn’t, held on the eve of the Warwick Valley Farm Aid Benefit. After Hurricane Irene blew through here last year we were devastated. Eighty of 100 acres were destroyed. We so needed a reason to celebrate that we were here and alive and well, that we were going to get through this and be fine. So there wasn’t a lot of produce in sight but there was a whole lot of heart. Our community rallied around us and showed that we had to so much to be grateful for. We were celebrating the harvest of the community.” Chef Kurosz adds, “So many people came out and ate and danced and laughed. It was really a heartfelt good time.”

What’s Next?
Farm to table is the latest trend for restaurants; chefs face tremendous pressure to provide local food. The financial reality of sourcing entirely from local farms is prohibitively expensive, unless chefs purchase a whole carcass or try partnering with a local grower. Warren hopes that “more restaurants partner with local farms—the farmer grows for the restaurant and the restaurant makes a financial commitment to the farmer.” A truly mutually beneficial relationship—the restaurant pays for the farmer’s seeds and the chef doesn’t have to scramble for the menu’s fresh peas and mint.

Laura Pensiero of Gigi Hudson Valley opened Gigi Market in 2006 at Greig’s Farm in Red Hook because she “loved this farmland and the enchanting interior space in this renovated barn. We had a need for space and a dream of getting even closer to the sourcing of our food.” In 2012, Pensiero and chef Mark Fredette introduced weekly Agriturismo Dinners, literally a taste of local agriculture done in Gigi’s Mediterranean Hudson Valley style. Produce originates in Grieg Farm’s fields and supplemental ingredients are sourced from Migliorelli Farms, Mead Orchards, Northwind Farms, Montgomery Place Orchards, Hearty Roots Farm, and Paisley Farm.
Farm-to-table dining on-farm offers sublime delights like dusk closing in on a field, direct access to farmers, ridiculously fresh delicious food, and, yes, occasionally flies too.