The Myth of our Failing Public Schools 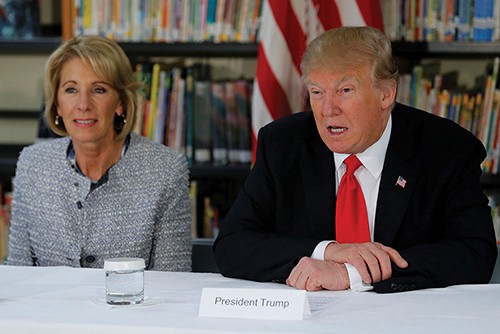 The night before Betsy DeVos was confirmed as United States Secretary of Education, Democratic Senators took shifts speaking nonstop for 24 hours in protest. The Minority Leader, New York's Senator Chuck Schumer, stated, "The Senate has the responsibility to reject the nomination because she is so uniquely unqualified." The next day, two Republican Senators voted against DeVos for the position. Citing conversations with numerous constituents, Alaska's Lisa Murkowski stated, "I have serious concerns about this nominee to be Secretary of Education, who has been so involved in one side of the equation, so immersed in the push for vouchers, that she may be unaware of what is successful in the public schools, and also what is broken and how to fix them." The Senate was in a stalemate, and when Mike Pence was called in to cast the tie-breaking vote (which he did in favor of DeVos), it was the first time in history that a Vice President was needed to cast a tie-breaking vote for a Cabinet nominee.

Both two previous education secretaries under President Obama, Arne Duncan and John King, were moving in a pro-charter school, pro-voucher direction. However, DeVos is seen by those in education as more extreme. Her confirmation was contentious because of her background. A professional lobbyist in her home state of Michigan, she and her husband successfully worked to pass legislation in 1993 to welcome and direct public money toward charter schools. Eighty percent of the ensuing flood was found to be run by for-profit management companies unbound by financial transparency requirements, and the charter schools were performing little better on standardized tests than public schools. Yet DeVos continued to push for privatization, this time encouraging Michigan voters to amend the state constitution and adopt a voucher system. When the ballot measure failed, DeVos established the Great Lakes Education Project (GLEP), an advocacy organization for school choice, which helped the legislature lift the cap on charter schools in Michigan, reducing restrictions on their numbers and locations.

Charter schools are K-12 educational institutions, which are funded by taxpayers but managed privately. They operate independent of the nation's public school system and aren't beholden to the same standards. They don't have school report cards or state testing. Their teachers don't have to be state certified or union represented. They can select students for enrollment, unlike public schools, which must serve every student in their district. Last summer, DeVos and her husband spent $1.45 million to defeat legislation that would provide oversight of charter schools, allowing them to operate regardless of performance or student success.

The Rationale for an Outsider

"Charter schools in New York are basically funded by the local school district," explains Kingston City School District (KCSD) Superintendent Paul Padalino. "When the student goes to a charter school, there's a dollar figure attached by the State Education Department, and we give that money to the charter school on an appropriate per-pupil basis." With charter and Catholic schools, the school district is required to provide transportation, textbooks, and services like special education and ESL, and health services.

The money, however, doesn't always reflect the true cost of education. Certain students, such as those with disabilities, require services other students might not, and so could cost significantly more to educate. "When we calculate our per-pupil expenditures, it's about the plant, the custodial staff, the health services—all these other things that we do," Padalino clarifies, pointing out that infrastructure expenses remain when students matriculate elsewhere. "The charter school movement actually sometimes draws so much money out of the public system—this has happened in the city of Detroit—and the kids who are left in the public district are the kids who are at-risk or are receiving special ed services and then you're comparing apples and oranges. Because we're not talking about the same public school we would have."

The rationale for an outsider heading the nation's education system is that public schools are failing. "[DeVos has] been very critical of public schools," agrees KCSD Board of Education (BOE) President Nora Scherer. "We have to be a little more vocal about the good things that are happening in schools, because there is a negative counter message and we have to act to refute that."

Five years ago, when Padalino took his desk in the corner office, KCSD was facing a continued loss of school aid and a 2012-13 budget crunched by a new tax levy cap law, which required local governments and school districts to limit tax increases. Duncan was Secretary of Education and pushed states to adopt Common Core standards by threatened by funding cuts. KCSD hired teachers and consultants during that implementation to rewrite all the curricula so it aligned with the Common Core. The governor was pushing to consolidate services and merge districts. It all came to a head in Kingston. Under capacity in several buildings and with projected student populations in decline, post the 9/11-baby boom, Padalino made the painful choice to close four elementary schools and move fifth graders into the middle schools. The numbers in Kingston were serendipitous, in that the whole community of one school could be picked up and moved into another. For example, the remaining students and teachers at Sophie Finn fit neatly into the under-capacity Edson. Now, those downtown kids ride their school buses uptown, and many of their teachers moved with them.