For One of Nature’s Most Potent Prescriptions, Look Under Your Feet. 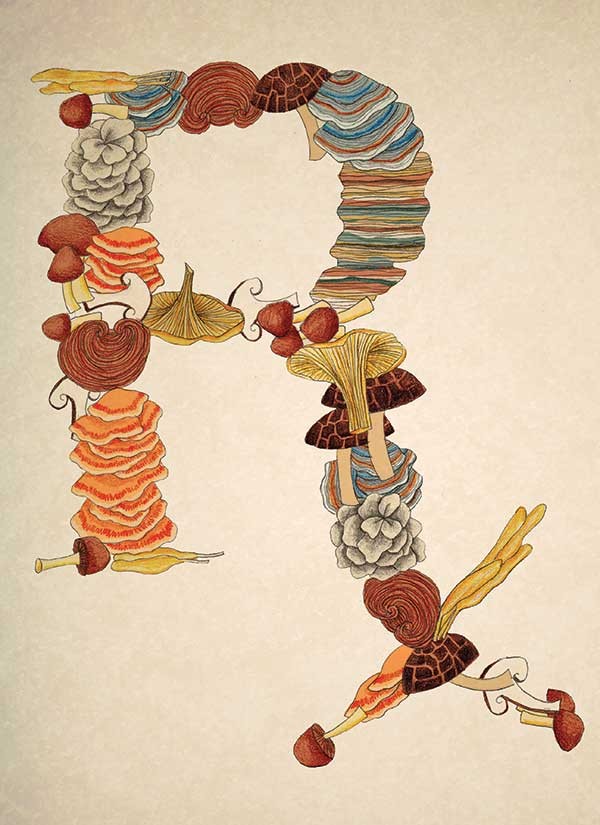 The woods of Chichester, off Silver Hollow Road, look like woods to me—but to Larry "Veg Shroomdog" Litt they are one big pharmacy. In this lofty cathedral of ash and hemlock, the medicine we've come to find is mushrooms. Litt—an amateur mycologist and alternative-healing researcher, teacher, and writer—has taken me here with his partner in fungi crime, Eleanor Heartney, primarily to hunt for polypores, the shelf-like mushrooms that grow on trees and are believed to deliver potent medicinal value. At the very least, we might come up with some dinner.

"We're looking for reishi, chicken of the woods, or early maitakes," says Litt as we step into the forest on this late-August afternoon. Because of their antiseptic properties, polypores like these have traditionally been used to dress wounds; some research suggests they can also be antitumor, antioxidant, and anticancer. "If you see four reishis in a summer, that's a good year," says Litt. "It's like finding a parking space in the East Village on a Friday night!" Apparently, the wild variety can go for $300 a pound—but this avid forager doesn't like to take money ("I'd rather trade for flowers, or bad carpentry"). Meanwhile, in the earth under our feet lies a network of mycelium, just one cell wall thick—a diaphanous magic carpet from which the mushrooms grow. "No drug company can take the mushrooms away," says Litt. "The forests could burn down but the mycelium would still be under the ground. After fires and nuclear holocausts, what comes back first are mycelium and mushrooms."

Ancient Wisdom, Modern Promise It was the Ancient Greeks who first identified mushrooms as medicinal; around 450 BCE, the Greek physician Hippocrates classified the amadou mushroom as a potent anti-inflammatory. In 13th and 14th-century Asia, wandering Taoists studied the properties of mushrooms and recorded their medical effects as well. Yet it's not just barefoot herbalists who have found health benefits in mushrooms; modern science, too, has its latex-gloved hands in fungi. Cordycepin, a cancer medication that's now produced synthetically, was originally derived from the cordyceps mushroom. Other fungi offshoots include Cyclosporine, which prevents organ rejection in transplant patients, and the multiple sclerosis medication Gilenya. Recent studies have given strength to the idea that mushroom supplementation can boost the immune system. Yet many mycologists and researchers believe there's still a lot of untapped potential in mushrooms; clinical trials are expensive and often sponsored by a market-driven pharmaceutical industry. It doesn't help that a certain level of mycophobia—fear of fungi—prevails in our culture.

"Mushrooms are ephemeral and not as familiar to us as plants and animals that we see every day," says Paul Stamets, an internationally known mycologist, researcher, inventor, and author based in Kamilche Point, Washington. "Some can feed you, some can heal you, some can kill you, some can get you high. If you're not familiar with something so potent, then the natural reaction is to avoid it." Like mushrooms, Stamets himself is a force of nature; an entrepreneur through his natural-products company Fungi Perfecti, he has written six books, holds more than 7 patents(with more pending), and gives TED talks about how mushrooms can save the world. One of his products, a version of the turkey tail mushroom available in pill form under his Host Defense label, was the subject of a recent $2.2 million phase I breast cancer clinical study funded by the NIH. "The study shows strong statistical significance that on a dose-dependent basis, when you consume turkey tail mushroom mycelium, there is a direct enhancement of the immune system, specifically with natural killer cells and cytotoxic T cells," says Stamets. "These enhance immunity to help keep cancer at bay." One of his favorite stories is about his own mother, who at 84 years old had metastatic stage 4 breast cancer and treated it by complementing conventional Herceptin drug therapy with turkey tail mushrooms; her case has been written up as a best-outcome scenario in medical journals. Four years ago she had been given six months to live. To this day, she's tumor-free.

Close Encounters of the Forest Kind Popular in parts of Europe and Asia, hunting for wild mushrooms isn't exactly an all-American pastime; it's a fringe activity that might gain play among back-to-the-earth types. For Litt, though, 'shrooming is in his blood. On summer vacations out of New York City, his Austro-Hungarian Jewish immigrant grandparents took him foraging in the Fleischmanns area. "They knew which mushrooms would make you sick and kill you, and which ones were edible and really good," he says. "If as kids we picked a bad one, they'd knock it out of our hands." All the years of experience paid off, and Veg Shroomdog seems to sniff out fungi in the darkest of forest corners. Heartney, his consort, is the designated "blade"; she hacks the mushrooms off with a knife and stashes them in a foraging bag. Early on in our hike, we spot tall trees ringed from trunk to tip with polypores—the medicine we've come to find. No need for a close look: Litt has dozens of samples at home in preparation for a course he's teaching this fall on medicinal fungi at the Pratt Institute in New York City. Now it's onward to satisfy our gourmet appetites for mycophagia (mushroom eating).