On the stage, a pair of giant bodiless hands moves as though attached to an invisible being. The two hands come together in a clasp of choreographed precision. The right hand releases itself and points its index finger to the audience, motioning up and down, counting. The movement progresses by switching to the left hand. This whimsical and abstract display is the essence of Mummenschanz, the world renowned Swiss pantomime troupe who will be performing at Ulster Performing Arts Center in Kingston on October 23.

Mummenschanz (roughly translated as masquerade) explicates moments of love, hate, greed, fear, and selfishness without a sound. Instead of using their voices, Mummenschanz operates with surreal masks, costumes, and specially designed props to convey emotional storylines and messages of criticism. Since 1972, they have been transcending cultural boundaries and language barriers with nonverbal theatrical performances, playing to mesmerized fans on six continents.

The abstract forms and expressive visuals have successfully related to diverse audiences through four decades of evolution. Co-founder Floriana Frassetto said she believes the interpretation of the performance may vary, but the emotions are universal. “It’s very important that we leave that freedom of interpretation to the audience. The chemistry of the audience changes from show to show, and from country to country,” Frassetto said. “There’s always a little variation because its like [they are] our orchestra director.”

Mummenschanz takes ordinary objects and turns them into fantastical characters with human sensibilities. The troupe finds inspiration in simple situations such as watching a worm wiggle beneath a rock, or visualizing what a seed growing might look like. Moments of mystery and suspense are presented in a series of nonlinear scenes.

When the troupe was formed in 1972, original members Bernie Schurch, Andres Bossard, and Floriana Frassetto were reacting to the unhappiness of young people impacted by the Vietnam War. For them, art and theater was one way of defending the rights of those with different ideas. “People of all nations might not really speak to each other on the streets, but in the theater their all laughing the same way. Its a communion of playfulness,” Frassetto said.

In 1977, Mummenschanz made it to Broadway expecting to stay only four weeks. The engagement lasted three years. Its extended run was longer than any other show in history without words or music. They also performed their humorous sequences on “The Muppet Show” and “Sesame Street.”

The death of Bossard in 1992 was a terrible loss for the troupe, but Schurch and Frassetto continued to perform with new members Pietro Montandon and Raffaella Mattioli, and technical director Jan Maria Lukas. “As long as I enjoy doing it, I want to continue,” said Frassetto. “The day I don’t enjoy it anymore then I’ll stop.” 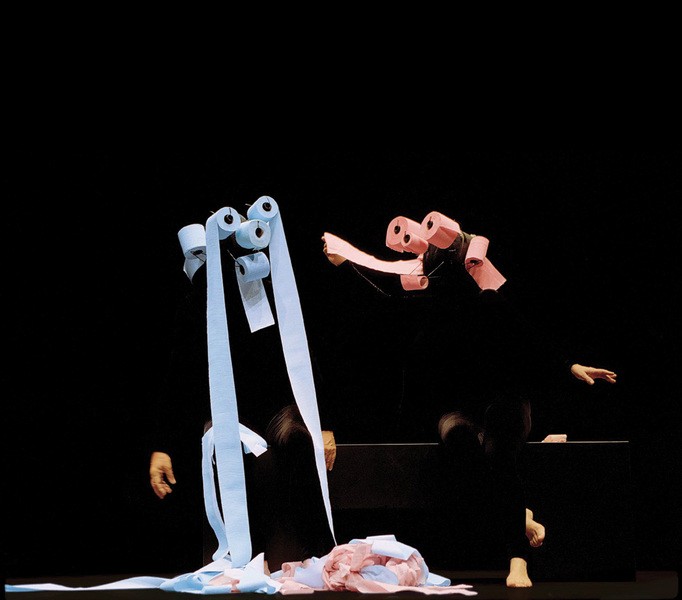