The Mammals Release New Album on 4/20

To say these are dark times seems so inadequate as to be some kind of a sick joke. The day-to-day assault on our democracy from within, by the toxic tinhorn who slimed, slithered, and swindled his way into the presidency, continues. It seems like every social media visit ends with us wanting to squeeze through the screen and throttle someone—and ultimately feeling bad about letting our emotions get the better of us. Yeah, it's dark, all right. But then, when all seems lost, a sliver of light appears.

"Just be kind to the people you know and love / and give a little more to the one you want to shove," sings the Mammals' singer, fiddler, and guitarist Ruth Ungar on "Open the Door," from the recently resurrected Americana band's new album, Sunshiner.

"The [2017 immigrant] travel ban was going on when that was being written and it relates to that, but it's more of a mom kind of song," explains Ungar, who has two kids with the group's cofounder, singer, guitarist, and banjoist Mike Merenda. "It's about trying to teach principles to your kids but realizing you can really only do that by living them. It's also saying, 'We do this work, and even if it's imperfect we go on working.'"

Lately, Merenda and Ungar are better known as the duo Mike & Ruthy, but they have been Mammals much longer, forming the politically charged combo in 2001 with guitarist and banjoist Tao Rodriguez-Seeger, Pete Seeger's grandson. In the face of the second Bush era, the New York-born group, augmented with a changing cast of accompanists, released four albums and toured North America, Europe, and Australia before going on hiatus in 2008 as the newly married Ungar and Merenda retreated into family life and their more self-contained musical incarnation. But in 2017, Merenda and Ungar were inspired to reactivate the Mammals, much like when bassist Charlie Haden reunited his Vietnam War-period jazz-protest ensemble, the Liberation Music Orchestra, to rail against the Iraq War.

"We'd actually been toying with the idea of doing it when were we making [2015 Mike & Ruthy Band album] Bright as You Can," says Merenda. "And then the 2016 election happened, and that just emboldened us. It was, like, 'Okay, now we have to do this.'" Rodriguez-Seeger, though, opted to sit this one out. "Tao was tired of touring and being what he called 'a professional grandson,' so we bought the rights to the band name from him. I'd been writing songs for a solo record I was going to call '69 Protest Songs [a nod to Magnetic Fields' 69 Love Songs], but then I started feeling like a long album of heavy protest songs could be a bit much. So I put that idea aside and we ended up doing some of the songs from that project for Sunshiner. We learned all kinds of things from playing with Pete Seeger for so many years, and one of them was that sometimes one or two well-placed protest songs surrounded by some fun dance songs can win the day."

And although the lines between the two acts are frequently blurred, it's the fiddle-driven dance tunes, along with the emphasis on political topics (over Mike & Ruthy's stronger focus on matters of family and the heart), that, as Merenda points out, define the music of the Mammals. Sunshiner radiates with upbeat, dance-friendly ditties like "Make it True," "Fork in the Road," and "Doctor's Orders." The couple's bandmates include longtime bassist Jacob Silver, current B-52s keyboardist Ken Maiuri, drummer Konrad Meissner, and pedal steel player Charlie Rose. Among the guests on the album are Ruth's father and stepmother, violinist Jay Ungar and bassist Molly Mason; her mother, folksinger Lyn Hardy; and local luminaries Amy Helm, Connor Kennedy, Lindsey Webster, Sarah Lee Guthrie, and Andy Stack on harmony vocals. Due out this month, the disc is also home to two powerful, moving tracks that saw online release in 2017: Ungar's tender Standing Rock dedication "My Baby Drinks Water" and Merenda's sweeping "Culture War."

The title track, as fine an example of a singalong number as one could want from a folk rock record, plays on several levels. The word "sunshiner" is the band's own term for those who strive to improve the world "in any field of endeavor," and the song's old-timey feel and lyrics ("Yes, my daddy was a miner but I'm gonna be a sunshiner / And my granddaddy was a miner but I'm gonna be a sunshiner") allude to traditional folk themes. But on top of that the quietly hopeful tune is also, to use an obvious term, a beacon, highlighting the inherent progress of solar power (that the Kentucky Mining Museum recently installed solar panels on its roof is, as the band points out, downright poetic). 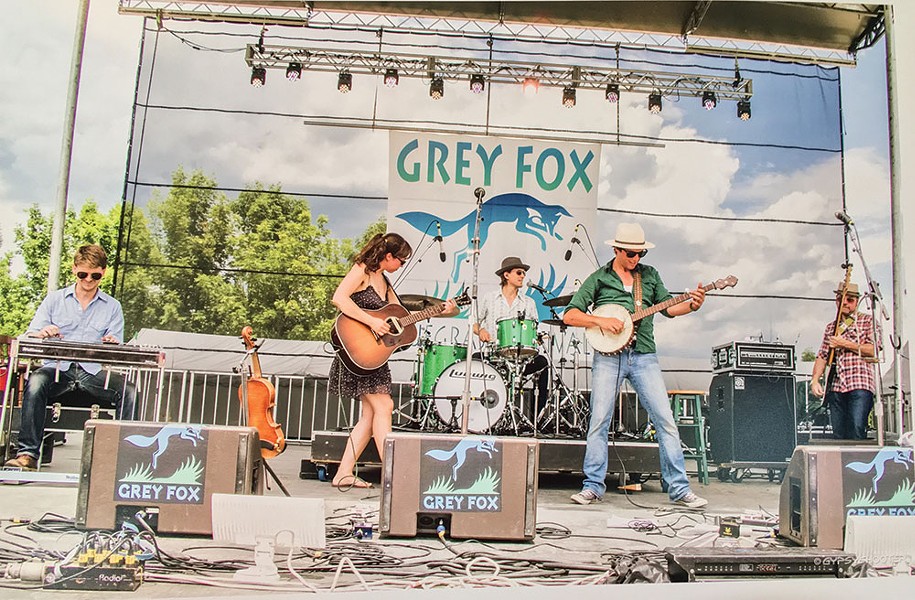 Raised in Saugerties, Ungar pursued a theatrical career before meeting New Hampshire native Merenda, who played in college ska and indie rock bands, in 1998. The two formed the string trio Rhinegold, named for their favorite cheap beer, which morphed into the Mammals once they began collaborating with Rodriguez-Seeger. Although the latter group's youthful energy made them popular on the folk circuit, in the early days, their defiant idealism occasionally caused controversy. At one Louisiana festival, the Merenda-penned, au courant "The Bush Boys," from 2004's Rock That Babe, stirred up such a fracas that the event's organizers reprimanded the band and forbade them or any other artist from playing the song there again. The upshot was that the folk community rallied around the outspoken outfit, whose profile was subsequently raised by a tour with Arlo Guthrie.

"If you tell the whole truth you won't please everyone," says the song's author, who cites the similar situations that famously beset their mentor Pete Seeger during some of his brave moments. "When we were in our 20s it was easy to yell about what we were against, but now we're about broadcasting what we're for. I think it's an easier way to achieve things, doing that." Ungar points out that since making the shift, they have gotten more positive audience feedback about their lyrics. "Especially lately with 'Sunshiner,'" she says. "I've had people come up to me and thank us for singing that song, saying, 'My father and my grandfather really were miners, and I really do want a better life for me and my kids than the one they had.'"

"When Pete [Seeger] was talking about writing songs to me and Mike and so many others, he always said, 'You never wanna be too teachy-preachy,'" recalls Sarah Lee Guthrie, Arlo's daughter and, yes, the granddaughter of Woody himself. "When it comes to writing songs that deal with social issues, there's a fine line between being pointed and being off-putting. And I think the experience that Mike and Ruth have from doing it so long has made them really good at keeping that balance. They're able to nail it every time now, and they just keep getting better at it."

Presently, the Mammals are on tour with Merenda and Ungar's 10-year-old son, Will, and five-year-old daughter, Opal, in tow, as the band shines some light on Sunshiner along with the progressive causes they advocate. While the group prepares to head out on the road again, with the world being as bleak as it's been lately, our narrative here bends back around to home in on the undeniably optimistic undercurrent that, against all odds, permeates the new album. Where does the group find such unshakeable positivity? "Hope can be hard to come by, but there are alternative visions out there and someone needs to present those visions," Merenda says. "And it might as well be us."

Sunshiner is out April 20 on Humble Abode Music Music and can be preordered prior to the official release date via the band's website. The Mammals will perform at the Egremont Barn in Egremont, Massachusetts, on April 27 and Colony in Woodstock on May 19.