The Magical Lives of Carol Goodman 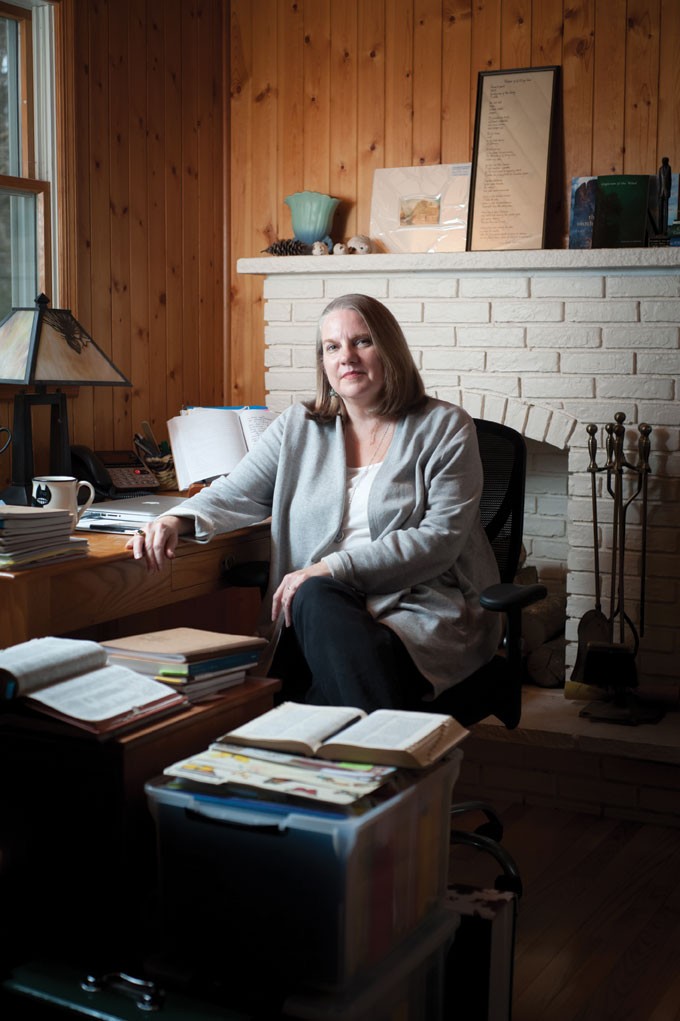 How many writers live in a modest white house overlooking a field on the outskirts of Red Hook?

That's already a houseful. But Slominsky has also penned verse for Goodman's fictional characters Neil Buchwald (The Drowning Tree), Zalman Bronsky (The Ghost Orchid), and an enigmatic 16th-century poet who may have been Shakespeare's Dark Lady (The Sonnet Lover). Goodman has written excerpts from the works of deceased authors K. R. LaFleur (The Seduction of Water) and Lily Eberhardt and Vera Beecher (Arcadia Falls). Add to the mix that her "Juliet Dark" incarnation also created the unexpurgated bodice-rippers of The Demon Lover's Dahlia LaMotte, and things start to verge on Mad Tea Party.

Indeed, Goodman offers tea as soon as her guests cross the threshold, but the tea tray she's prepared—a steaming pot of Harney & Sons' Dragon Pearl Jasmine and a selection of cakes from Bread Alone—seems more maternal than mad. She carries it into her study, lined with built-in bookshelves, a comfortable couch, a large white-brick fireplace, and a writing desk that suggests the helm of an orderly ship.

It seems entirely fitting that Goodman should write in a room that's right next to the hearth and a few steps away from the kitchen. Mothers and daughters are central to her fiction and her life—the plywood Christmas tree leaning against the bookshelves was painted by her daughter Maggie, a student at Bard, because pine needles aggravate Goodman's asthma. She's still readjusting a writing routine that started when she used to walk Maggie to school in the Long Island suburbs. As her daughter grew older and more independent, Goodman's work rhythms changed, but she still likes to compose in her head during walks, memorizing and refining a nugget of prose that she brings back home. "I sit down to write it, and often I just keep on going," she says.

She always writes first drafts longhand, and starts work each Monday by typing the previous week's pages, often revising as she goes along. Typically, she turns out a chapter a week, but The Demon Lover was different.

"When I got the idea, it was like I was possessed by a demon lover," Goodman reports. "I thought about it all the time." She kept a notebook next to her bed, and would often wake up and start writing at once. She's always enjoyed working in bed ("I call it my Edith Wharton writing"), but the feverish pace was unprecedented: She finished a first draft in four months.

When she came up for air, she realized "my house was a wreck, I hadn't talked to people in months. I looked at my daughter and said, 'Have you gotten your college applications in yet?'" She did three more drafts before publication, and already has two more Juliet Dark novels on tap. The second volume of the Fairwick trilogy, The Water Witch, will come out in 2013; Goodman just finished the third, The Hallow Door, and is starting a new book that features a shapeshifting bear.

Goodman's transition from more realistic fiction to fantasy genres was organic. "I'd often written about fairy tales, and the idea of making the fairies real and going into the supernatural just took hold of me. It seemed like the next logical step," Goodman says. "This feels like what I'm supposed to be doing right now."

It also connects to her first loves as reader and writer. She grew up in a bland Pennsylvania suburb, enlivened by her mother's colorful bedtime stories. In fourth grade, she churned out a 90-page creative writing assignment about a girl who lives with a herd of magical horses. Soon, she was devouring Mary Stewart's The Crystal Cave, Victoria Holt romances, and TV's "Dark Shadows." At 13, she read Jane Eyre, "still probably my favorite book."

By then, her family was living in Great Neck, where Goodman spent her teen years writing "adolescent angst poems," one of which earned her the Young Poet of Long Island Prize at 17. She went on to Vassar, where she majored in Latin and read lots of folklore and classic mythology.

After college, she moved several times—to the Adirondacks, Texas, Colorado—while earning a master's degree, getting married, teaching Latin, having a child, getting divorced, and returning to Great Neck. Somewhere in all this upheaval, she managed to finish two novels, a young adult fantasy and a mystery. Neither one sold, and she nearly lost hope.

She met Lee Slominsky in 1994, when she took his class in mystery writing at Hofstra. "We were all adults, that's the important thing to remember," Goodman jokes, adding, "Lee was the first person who said, 'You're a writer. This is what you should be doing.'"

They married in 2000. Goodman soon sold her third novel, The Lake of Dead Languages, enabling her to stay home and start writing full-time. "I realized I could write and raise a child, or teach and raise a child," she says. "I could do two of those things, but not all three." In short order, she published seven acclaimed novels for Ballantine, most set in mix-and-match portions of upstate New York.

Though The Lake of Dead Languages is set in the Adirondacks, its fictional Heart Lake is modeled on Lake Mohonk. The Seduction of Water's Hotel Equinox may conjure the arson-doomed Overlook Mountain House, if it overlooked the Hudson instead of Woodstock. And while the artists' colony in The Ghost Orchard shares some DNA with Saratoga Springs' Yaddo, Goodman quickly affirms that the dark past she concocted for its founders is entirely fictional. The Drowning Tree takes place at a Vassaresque college, and The Sonnet Lover and The Night Villa in Italy, where Goodman spent a semester as a Vassar undergrad. And although the bohemian boarding school in Arcadia Falls recalls Woodstock's Byrdcliffe Colony, it adjoins a deep waterfall gash more like Kaaterskill Falls, where Goodman and Slominsky have hiked. "We go on location scouts, like in the movies," she says.

Last year, they finally left Long Island for the landscape of Goodman's dreams. "If you had asked me ten years ago where I wanted to live, I would have said Red Hook or Rhinebeck," she exults. In the fall, she walked daily at Poets Walk Park. "I'd get to that spot where the view opens up and every time I'd say, 'Oh my god, it's gorgeous here!'"

That may be one reason she stuck with the Catskills for Juliet Dark's Fairwick trilogy. "If I'm writing a new series, why not set it in my favorite place?" Goodman says. "I did not feel I had exhausted it, which speaks to the diversity of the Hudson Valley." The familiar location may also help ease Carol Goodman fans over the genre gap.

"My editor will tell you I write 'literary thrillers,'" says Goodman, who worries that might sound "a little pretentious. To me they're more bookish—they're about books and academia, folklore, and fairy tales."

There's nothing remotely Disney about Callie's incubus, whom Goodman's stepdaughter Nora nicknamed "the Demon Lovuh." The bookjacket copy promises "toe-curling sex," and Goodman-as-Dark delivers. Writing explicit sex scenes "was fun, but it was hard," she reports. "You risk embarrassing yourself. I like sexy books, but my natural inclination is the Hollywood fadeout—the sex scene takes place between chapters. I prefer to write about desire, the emotional relationship. But for The Demon Lover I had to go beyond that. The relationship is sexual and had to be—you wouldn't want to pick up a book called The Demon Lover and not have sex scenes."

She points out that her Carol Goodman and Juliet Dark novels share the same core: a strong, intelligent female narrator who can make big mistakes, "so there's vulnerability," and a strong sense of place. "I hope some of my readers will follow me from one to the other," she says a bit wistfully. Those who might not include her mother, who pronounced The Demon Lover "not my cup of tea," adding loyally, "though I can tell that it's good." Goodman explains, "She's a mystery reader, but she's not into fantasy. I lose her when the fairies start popping out."

Undaunted, she's planning a young adult trilogy for Viking Penguin, with the working title A Darkness of Angels; its credited author may be Carol Goodman or some new incarnation, joining the magical pack in the house outside Red Hook. Whatever her name, she's in very good company.