The Literary Palette of Djelloul Marbrook

Inside, his wife Marilyn sets out an edible still-life: platters of cut figs, ripe brie, grapes. There are paintings on every wall. A few are by Hudson Valley artists Chris Metze and Jenny Nelson, or by Marbrook’s aunt, Irene Rice Pereira, but most were painted by his mother, Juanita Guccione. Both Pereira and Guccione were well-regarded 20th-century artists; their work graces the covers of Marbrook’s art-infused poetry collections, Brushstrokes and Glances (Deerbrook Editions, 2010) and Far from Algiers (Kent State University Press, 2008).

My hopes are lost in my mother’s paintings:
streets of cards, titanic women, eclipse:
lost in the pungent art of their creation,
covered over by brush and palette knife.

Who cares about them in that neighborhood?
Not even I do. They embarrass me,
they were so ill-made and quaint,
but I hear them whimpering in the night.

I am, God help me, the husband of this work
and must take better care of it
than I took of the hopes that haunt it;
now let them glisten in museums.

A conversation with Marbrook unfurls like a Mobius strip, twisting between life and art. By anyone’s lights, he has played many roles: outcast son of a renegade mother, Columbia student, Hell’s Kitchen bagman, seafarer, hard-drinking journalist, autodidact—and, at 73, award-winning poet. When Far from Algiers won the Stan and Tom Wick Poetry Prize, judge Toi Derricotte wrote, “How honored I am—how lucky—to have been able to choose this superb first book by Djelloul Marbrook that honors a lifetime of hidden achievement.”

Marbrook’s origins were cloaked—even from him—in a cloud of myth. In 1930, art student and model Juanita Rice went to France to study painting. Finding the Parisian vie bohème too expensive, she traveled by tramp steamer to North Africa and spent four years painting among the Ouled Nail Bedouin tribe in eastern Algeria. “Unlike European orientalist artists—Delacroix, Matisse—she didn’t paint Arabs as exotics,” says Marbrook. “She lived with them.” Her adventures included accompanying a camel train across the Libyan desert on what proved to be a gun-running expedition, and falling in love with a wealthy Bedouin who died in a hunting accident—or so she claimed when she returned to New York in 1935 with his infant son Djelloul.

“She lied like hell,” Marbrook says bluntly. It would be decades before her fiction unraveled. In 1991, while exhibiting Guccione’s early paintings in Algeria, Marbrook learned that his missing father (who lived until 1978, leaving a widow and three other children) was Ben Aissa ben Mabrouk, the young lover of a wealthy Scotswoman who’d taken Juanita in when she was ill. “That’s how my mother repaid her kindness,” Marbrook says, shaking his head. “I look back on her as a lawless terrorist. The combination of beauty and talent—she felt licensed to act in ways most of us wouldn’t think to, or want to.”

Back in New York, Juanita taught painting at Cooper Union, worked on WPA murals with Diego Rivera, and hung out with refugee French surrealists. Motherhood, it seems, was on a drop-in basis. Young Djelloul was raised primarily by his grandmother and aunts, and when he grew closer to them than his mother, she packed him off to boarding school at age five. The English-run Christian Science school was academically rigorous, but riddled with bullying and sexual abuse.

Respite came in the summers, when Juanita and other New York artists migrated to Woodstock’s Rodney Farm, a cluster of rustic cabins on Jones Quarry Road. Marbrook recalls idyllic days riding his bike through the complex, posing for the Greenwood sisters, and meeting such local artists as Yasuo Kuniyoshi and Philip Guston.

He soon found a new father figure. As he was playing outside Juanita’s New York apartment, landlord Dominick Guccione asked, “Whose kid are you?” The seven-year-old boasted, “My mother’s an artist.”  The memory makes Marbrook smile. “He knew who she was—she owed him a lot of rent.” Guccione took him for ice cream, and eventually Juanita married him, despite a 30-year age difference. He was wealthy, and bought her a cottage in Woodstock “right behind Buzzy Tischler’s—I see it when I get my teeth cleaned,” says Marbrook.

Guccione’s presence opened other new worlds. A childhood friend of “Lucky” Luciano, he knew many underworld figures. As a teen, Marbrook spent three turbulent years with his mother and stepfather; she kicked him out on his 18th birthday. By then, he was attending Columbia, juggling part-time jobs at a theatre district newsstand (where Marlon Brando stiffed him for change), at the Ziegfeld’s orangeade concession, and as a bagman for a hatcheck operation in Village nightclubs. “The girls were high-end hookers—that’s where the real money was,” he says. Marbrook made his rounds “dressed like Joe College, twills and tweeds and a necktie—you can’t look like a New York dude or the cops’ll spot you. I’d collect the money and take it to a guy named Jack Rosen. One day he lays this lunch bag on me and says, ‘Watch this for me.’ I look inside and it’s uncut heroin.”

Spooked, Marbrook hid it in an alley. Rosen beat him up, breaking several ribs before stepping out. Marbrook struggled to the phone and called Vito Genovese, identifying himself as Dom Guccione’s son. Within minutes, two of Genovese’s men were dispatched. (“Look what you did to this nice Italian kid on the floor. Was that a nice thing to do?” the Algerian-American author recalls hearing one of them say as they stuffed Rosen into a metal trash can and rolled him into the street.)

Marbrook’s novella Saracenoriffs on these experiences. An unusually erudite and contemplative Mafia tale, it was printed by Open Book Press in 2006, but the publisher folded before distributing it. Marbrook reports a lively Internet trade in review copies, and Ulster Country publisher Brent Robison just released an e-book edition. (For someone who came of age in typewriter days, Marbrook is remarkably fluent in new media, generating a widely read blog and YouTube book trailers.)

Caught between Columbia and Hell’s Kitchen, estranged from his mother, and drinking too much, Marbrook snapped. He dropped out of college, joining the Navy. “But if you asked me what I did, I wouldn’t say ‘I’m a bosun’s mate,’ I’d say ‘I write poetry,’” he asserts. After five years at sea, he started writing for the Providence Journal, where an editor whitewashed his byline to “Del Marbrook.” (He still uses that nickname among friends, but reclaimed his Arabic name for creative work.) He went on to editing jobs at the Elmira Star-Gazette, Baltimore Sun, Winston-Salem Journal (where he met Marilyn), and Washington Star. He also became, by his own account, “a full-blown alcoholic,” given to quitting jobs in fits of righteous indignation. He even quit writing poems, judging his work dishonest and over-cerebral.

Though he never stopped studying poetry, Marbrook didn’t write it again until 2001. After 9/11, shaken by the attacks and xenophobic backlash, he started walking the streets as a way of reaffirming his love for New York. “I was taking notes, writing down impressions—after all, I’m a newspaper man,” he explains. At one point he noticed he’d written a page in octameter. He sat on a park bench, poring over his notes. “I found all kinds of internal rhymes and assonances,” he marvels. “My whole midlife had been spent not writing poetry. But this was not only poetry, but definitely not the poetry I wrote as a young man. The voice was quite vernacular, more conversational, more confident.”

These poems launched Far from Algiers. Though not overtly about 9/11, they’re suffused with imagery of displacement and foreignness. “I am a highly skilled outsider,” he writes in “Sinistral.”

Marbook still writes outdoors, often strolling along the railroad tracks by the Hudson River with a blue spiral-bound notebook. “I’m very pleine-aire. I don’t think well indoors,” he says. A notable exception is museums. Many poems in Brushstrokes and Glances include attributions to places where they were composed (the Brooklyn Museum, the Met, the Frick, MoMa); artists from Caravaggio to Lucian Freud put in appearances. So does a fictional painter named Artemisia Cavelli.

Marbrook’s latest novella, Artemisia’s Wolf (Prakash Books, 2011), also takes place in the art world. Artemisia, an ebullient young painter, was struck by lightning while hiking in the Catskills. Regaining consciousness in a hospital room, she finds she’s been joined by a white wolf that most other people can’t see. Inhibitions and memories loosened, she must relearn her own story, a twisting saga of sexual liaisons and professional betrayals. “I was motivated by what I see to be the predicament of women in the arts,” Marbrook says of his feminist fable. “My aunt Irene’s work is in every major museum in the world. It’s also in the basement.”

He’s currently writing a long narrative poem about Woodstock’s ill-fated Overlook Mountain Hotel, which he calls “a story of virulent anti-Semitism—Alf Evers kind of whitewashed it.” As with Artemisia and Saraceno, he has an insider’s perspective: After Guccione died, Juanita married Wilbert Newgold, whose family built the Mountain Hotel and Colony Café. She lived to 95, leaving no will and a messy estate for her dutiful son to clean up, just as he once rescued dozens of her mud-streaked canvasses  found floating in the Colony’s flooded basement.

One senses Djelloul Marbrook will never run out of stories to fill his notebooks. But if the art of words doesn’t suffice, he has other options. “I still fantasize, at this late stage in life, about learning to draw,” he says. As his own story proves, it’s never too late.

Djelloul Marbrook will read Friday 8/5 at 6pm with Tommy Zurbellen and Joseph Zepetello at Oriole9 in Woodstock, sponsored by Golden Notebook. 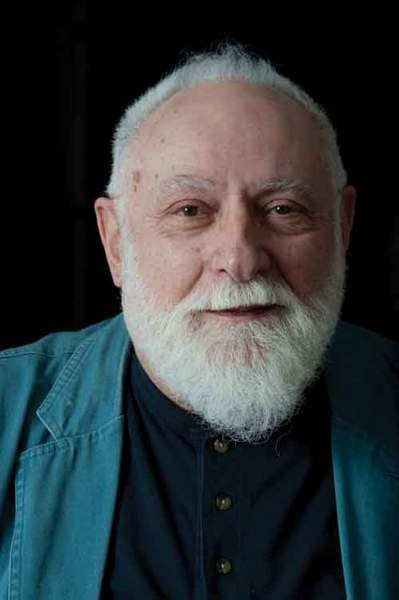