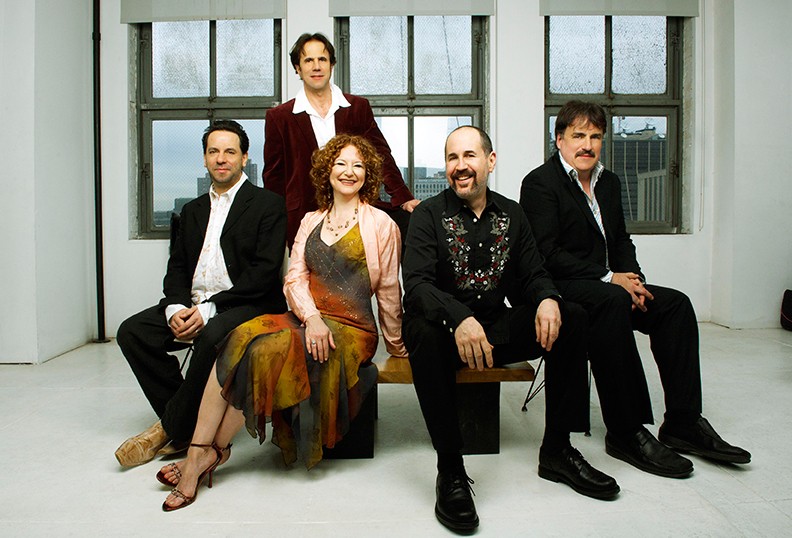 Writers often play up the parallels between jazz and klezmer, the traditional clarinet-and-violin-dominated Jewish folk music of Eastern Europe. They mention how the conservative Jews of earlier generations would've balked at the idea of a dialogue between the music they brought with them from the Old World and the radical jazz of their new, African American neighbors (think of the conflict in the 1927 film The Jazz Singer between Al Jolson's character, the aspiring jazz vocalist Jakie Rabinowitz, and his father, a strict cantor played by Walter Oland). True, to 2013 ears, untainted by traditions, the sonic similarities are indeed hard to miss. Klezmer's mournful "blue" modes and interludes of joyous polyphony, called freilach, echo jazz stylistically, and its solos, played tight and fast to fit one on side of a 78, much like those of early jazz bands, led some labels to market the music as "Jewish jazz." And of course Irving Berlin, George and Ira Gershwin, and other Jewish American songwriters famously blended the two styles; jazz icons like Artie Shaw and Benny Goodman soaked up the music of their Jewish upbringings; and later players like Don Byron and John Zorn have either performed or referenced klezmer. Yet at the same time there are those modern klezmer practitioners who feel this critical haymaking about the links between jazz and their own music is somewhat overplayed. Vocalist Lorin Sklamberg of the Klezmatics, who will perform on May 11 at the Poughkeepsie Day School, is among them.

"Yes, there are elements that jazz and klezmer share, but to me the comparison is facile," says Sklamberg, who also plays accordion, piano, and guitar for the New York group. "There's improvisation [in klezmer], but it's not quite the same as in jazz, not so free. Because it doesn't exist so much in Europe anymore, at this point klezmer is really just Jewish American music, in the way that Tex-Mex is Mexican American music and zydeco is Creole American music."

Founded in 1986 by Sklamberg, trumpeter Frank London, and bassist Paul Morrissett, the Klezmatics, who also currently feature violinist Lisa Gutkin and saxophonist Matt Darriau, have toured the world and appeared on TV's "Late Night with David Letterman" and "Sex and the City" and radio's "A Prairie Home Companion" and "The John Peel Show." Across their numerous recordings, which include 10 albums thus far, they've explored not only the deep well of Yiddish music, but also Jamaican ska, and through the Grammy-winning 2006 album Wonder Wheel (Shout! Factory Records), the songs of folk legend Woody Guthrie.

In a sense, this month's concert is a musical homecoming for the quintet. The Catskills were once the stomping grounds of klezmer kings like the great clarinetist Dave Tarras, who drew beboppers like Charlie Parker and Miles Davis up from Manhattan to study his technique. (That pesky jazz connection strikes again!) "Whenever we visit areas that historically have had a Jewish culture, like Poland, the audience seems to identify with the music," Sklamberg says. "So it's always good to play for the home team."