The Juggle is Real 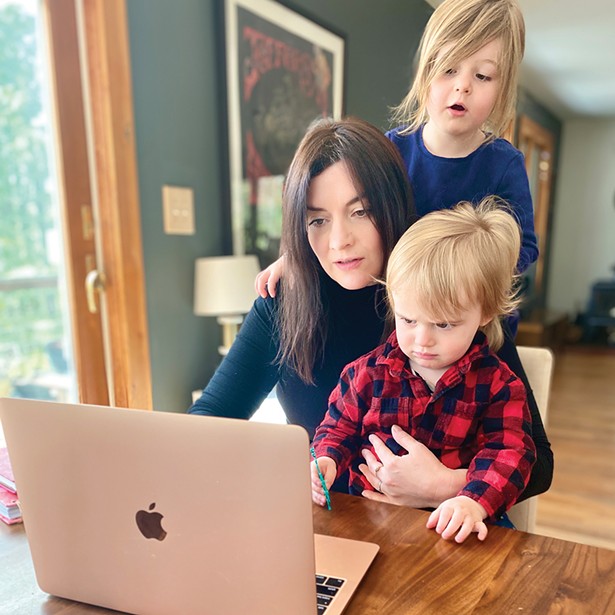 After spending the day following a regimented school routine for her two young kids, consisting of noisy nursery school Zoom calls and scheduled circle time, which occasionally involves a 20-minute crying session in her closet, Esther Downton puts in a four-hour workday while her children rest. After bouncing around from family to emails, some nights she ends up standing in the kitchen with her husband, wondering how she can continue under such high levels of stress. Downton owns Eliza & Wyld, an online and wholesale all-natural CBD wellness shop. "I'm not counting the days or weeks into how long we've been isolated now because I can't even tell you. I've gotten to the point where that piece of information is pointless."

Residing in Shokan, Downton represents one of many business-owning mothers who have begun homeschooling their children due to the novel coronavirus. In her case, she's been homeschooling her four-year-old daughter, Wylder, while Eliza, her younger daughter, absorbs as much information as she can. At about 1pm, Eliza, who is almost two, takes a snooze. This is when Downton takes advantage of the time and concentrates on writing, numbers, or drawings with Wylder. This style has become their routine.

"My initial feeling was to replicate the school day. We have a big chart in our house that has every hour or half-hour increment written down with pictures of what they were doing at that time so that they can kind of understand the day," Downton says. "I think that the biggest challenge is—as a mom you're dealing with a lot of emotion with your children all the time." Since replicating school at home and establishing a routine, Downton has to wear the hat of a moderator and become more rational with her children.

From the moment Downton wakes up, she is planning her day with her husband, Brook Downton, who is still remotely working as an executive producer for MediaMonks, a global digital production agency. "We literally open our eyes and start having conversations about the day and check our inboxes. Then it's, like, 'What time do we both need?' and the two of us then have to negotiate the day."

Since Downton's husband isn't his own boss, his job responsibilities are more so the focus throughout the day. "That tends to trump a lot of my stuff, so my work gets pushed into the evening," Downton says. Pre-pandemic, Downton was exploring getting new retailers for Eliza & Wyld. Since the spread, she has pulled back since many businesses are not looking for new stock. When she gets pockets of time to work, she fulfills orders and strategizes for her business.

According to a survey published by the New York Times in early May, 80 percent of mothers with children under 12 have said they are spending more time homeschooling their children than their partners. Only 3 percent of women say their spouse does more.

This sounds a bit like Marisa Phillips's case, a mother of two and entrepreneur who was in the works of opening a coffee shop in Saugerties with a partner before COVID-19 made its spread across the nation. "We had the cafe ready to go when this happened and it suddenly became the worst business you could open at this point. I have to reshift the business on top of homeschooling my two kids."

With plans to open in the fall, Phillips has fully taken on the role of stay-at-home mom and teacher. Her former partner has a full-time job, which she mentions is the priority, so her first grader and nearly four-year-old have been with her during the week. "For my youngest one I can do whatever with her, but my first grader is really learning some fundamental blocks. She's just learning to read and learning about math. I've never considered myself a teacher, and there's a lot of guilt involved. You want to do a good job," Phillips says.

Phillips is impressed with her children's schools' response to the pandemic, which includes sending long daily checklists of work, giving out homework, and hosting Zoom meetings.

Since her week is taken up by schooling her kids, Phillips uses the weekends for her work, a time where parents usually kick back and relax. "Weekdays are being taken up by school, since I get them until Friday. I have one weekday to catch up on all the administrative-type things I do. I feel like I'm trying to cram so much into the couple days I have."

A Balance of Time

Kingston resident Dahlia Graham, CEO and cofounder of award-winning chocolatier Fruition Chocolate Works splits the homeschooling time with her husband, Bryan, since they work together. "I have our daughter Zoey in the morning until he comes home between noon and three," Graham says. "He watches her and I go work remotely. My parents have a little guest cottage where I bring my laptop and phone. It gives me a safe space."

Zoey, who is three, was a full-time nursery student at Woodstock Day School pre-pandemic and even stayed in the afterschool program. Graham spends her time balancing her business and attending Zoom calls with Zoey's class. On top of that, she's doing educational activities with her, such as art, "PBS Kids," and reading. Woodstock Day School also sends home project ideas and packages, such as scavenger hunts and even a wooden flower to assemble for Mother's Day.

Though Graham is stressed due to taking on both roles of business owner and teacher, she explains that she also worries about the social aspect Zoey is missing out on. "She was really starting to get into loving her school and having that social aspect. This is the time she's supposed to be learning to share and play games with other kids—all of that, that she's missing."

A Day in Their Life

Stacey Dugliss-Wesselman is the founder of Cold Spring Apothecary, a wellness products and home goods manufacturer that has a small brick and mortar shop in Cold Spring. Dugliss-Wesselman has a hectic day from start to finish with her seven-year-old son. "My son is going through something he's never experienced. His whole life has changed," she says. 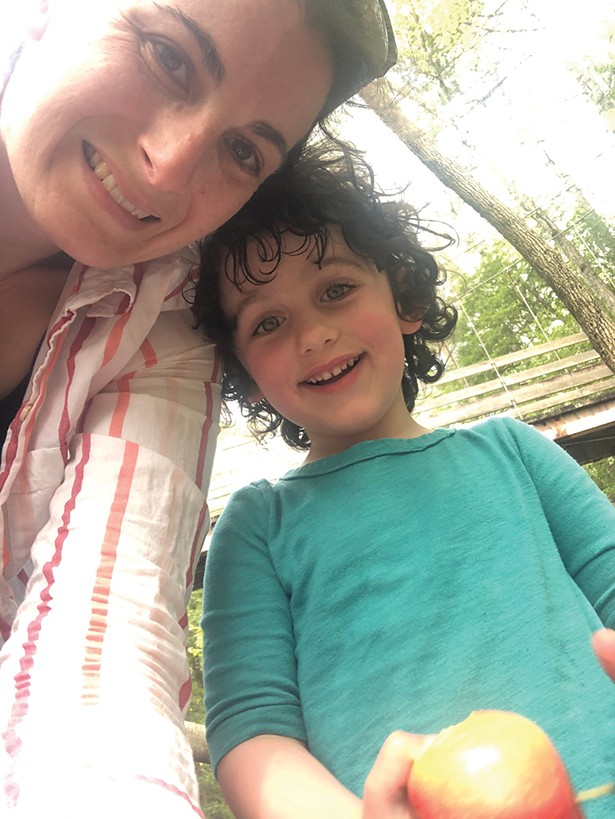 On a regular day, Dugliss-Wesselman wakes up around 6:30am. While she cooks breakfast, she prepares for the day by preparing worksheets and making a schedule. At this point, her son usually has a workshop for school, so she finally takes a look at her own emails. From here, it's schoolwork mode again until lunchtime. "I try to go to our manufacturing facility to check on what's going on there and help ship out any online orders. Then I'll come back here and get him rolling for the second part of the day."

It's around 4pm when the "school day" ends for Dugliss-Wesselman and her son. After that, it's free time, dinner, and then bedtime. This now becomes her time to begin her work—right around 8pm.

"Any small business owner knows you spend most of your day putting out fires, and I think that this is another one of those things. Yes, the fire is really big and we're kind of unable to put it out right now, but it's a matter of tamping it down so it doesn't grow out of control. That's kind of how I'm looking at each day. It's just doing what I can in those moments where he's not going to finish all the schoolwork that was assigned. It's realizing we're going to have to catch up the next day."

Some moms are balancing a work life with kids older than seven. Stephanie Doucette, a mother, designer, and entrepreneur from Cold Spring, owns Swing, a mindful and inspiring clothing company to encourage confidence in women. Doucette has a 12-year-old and two twins who are nine.

"It's been really hard. There's so much juggling of technology, Zooming, and all these programs that these teachers are forced to figure out. There's like seven to nine Zoom calls a day." Doucette says, "My 12-year-old is pretty self sufficient, but the twins definitely need to be kept on track. I need to help them, and it's usually needed at the same time, so it's really hard to keep it together."

Doucette describes their school as "the cornerstone of their remote learning." However, she also finds it quite intense. Her kids participate in meetings with their teacher virtually.

With her kids not being at school, Doucette has pondered the question of their learning outcomes for the year. "Are they going to learn what they would have this year in this situation? No, they're not, but they're going to learn different things. Families have never had this much time together. That's a huge experience, so I'm trying to focus more on that." For Doucette, her days are about all of her family members getting their work done—so they all try to roll through the day with flexibility of everyone's needs.

Though the pandemic has practically forced many families to have all the time in the world together, it doesn't make at-home situations easier. Yes, these mothers are now able to witness more developmental stages with their children, like their first time writing a word or them learning a new counting number, but with this pleasure comes the one certainty of the situation: stress.

For many parents, school wasn't just a place of learning, but childcare for working moms. It was a place for kids to make new friends and to be more social. Downton puts this very simply in regard to her daughter: "It's been wonderful watching her develop. I've seen her write her first words now, which I would not have seen if she had been in school. I saw her draw her first little doodles, which was a huge developmental leap that wasn't there before the pandemic. So, that's beautiful and amazing, but what comes with all of that joy is exhaustion."

In the Classroom homeschooling covid education

Overwhelmed by Omicron: Stories from the Pandemic's Third Wave