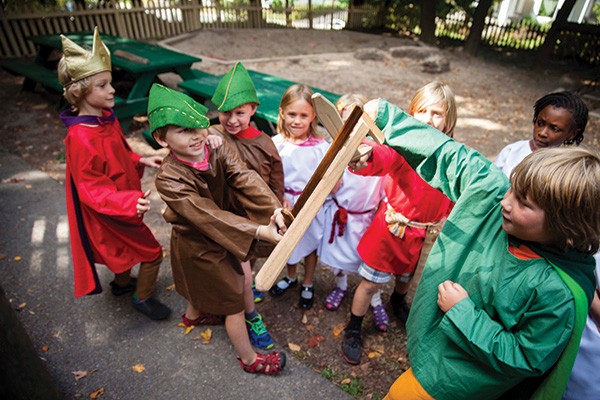 Thirty years ago, developmental psychologist and Harvard education professor Howard Gardner published Frames of Mind: The Theory of Multiple Intelligences. The book set off a depth charge underneath the comfortable Stanford-Binet IQ test-based academic world in which learning ability was widely regarded as binary—verbal and mathematical. Drawing on his research with both brain-damaged adults and "normal" child development, Gardner proposed that rather than two main areas of intelligence, there are eight: linguistic, logic-mathematical, musical, spatial, bodily/kinesthetic, interpersonal, intrapersonal, and naturalistic.

Gardner was careful to make the distinction that what he had developed was a theory of developmental psychology and not a theory of education per se. Nevertheless, his thinking offered a breath of fresh air to a great many educators, validating and organizing as it did something many of them had long intuited about the failures of cookie-cutter instruction.

Steiner Got There First
"In the Waldorf movement, the reaction was a big 'Yay! Wonderful,'" says John Greene, head of faculty at Great Barrington Rudolph Steiner School in Great Barrington, Massachusetts. "It was a sense of recognition that what Rudolf Steiner [founder of Waldorf education] was trying to articulate has merit and was being more widely recognized. Any teacher worth their salt recognized learning differences and their importance, but what he did was break it down—very impressive."

Though she's also quick to point out that Waldorf educators have been working from a multiple intelligence point of view for almost a century now, veteran GBRSS teacher Nancy Franco can reel off multiple examples that dovetail nicely with Gardner's work. "We work with all of these aspects every day, both individually and en masse—you could say that the Waldorf understanding of these concepts is very honed," she says. "They're important aspects of the human being that deserve to be experienced by all students. And since the Waldorf way involves working with the same group of students for eight or 12 years [students advance through the grades with the same teacher], we become very aware of how the individual modalities operate within the individual kids. We seek to utilize the strengths as learning tools, and to develop the areas that might need work."

For example, Franco says, a Waldorf school day begins with a musical interlude. "We sing, play instruments, recite rhythmic verse, do clapping games. Those activities touch on and elicit linguistic, spatial, musical, kinesthetic and interpersonal intelligence—so in that 15 minute opener, you're looking at four or five of the intelligences right there."

In the Classroom education waldorf intelligence