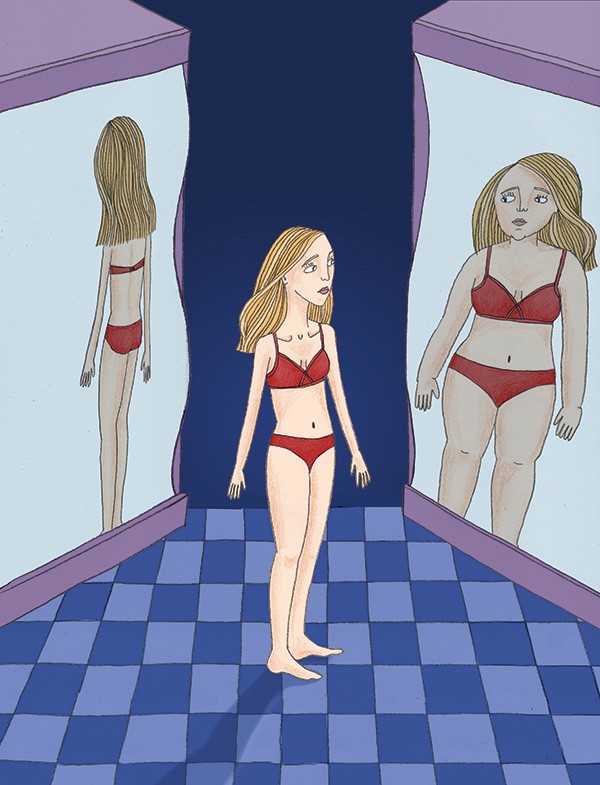 Olivia Jansen's troubled relationship with food started when she was four or five. "In my family of origin there was this big secret, and I didn't find out about it until I was in my early teens," says Jansen (not her real name), of Greene County. "I had this feeling in my gut that there was something wrong with me that my family wasn't telling me. To suppress that, I ate a lot." As a kid she hated going to school: "I was tall, I was fat, and the teasing was unbelievable." Switching to an all-girls school helped, and once she found out her family's big secret, her eating normalized. Then Jansen hit college—and slid into anorexia and bulimia. "College food wasn't very good, but it was also the thrill of being on my own. I didn't have to listen to my mother saying 'You must eat something.' I always showed rebellion through food, either by eating too much or too little." Anorexia, a pattern of severe food restriction, came first for Jansen. Bulimia, or purging, kicked in when she became involved with men, after her first sexual experience. "From the time I was 19 until today there have been periods in my life where I've been fairly 'normal.' I'm eating, I'm not overexercising, not throwing up, not bingeing." But whenever a love relationship ended, the anorexia came back. "Then I'd get so thin that I'd end up bingeing because my body desperately needed food, and that led to purging," says Jansen, who is in treatment now for her eating disorders. "Hopefully this time around the cycle will end."

Blame it on a media fixated on rail-thin images of feminine beauty. Blame it on a love affair with perfection and control. Blame it on trauma, anxiety, or depression. Blame it on genetics or family dynamics. The story is unique for each individual, but all of these factors can contribute to the rise of an eating disorder. According to the National Eating Disorders Association (NEDA), about 20 million women and 10 million men in the US suffer from a clinically significant eating disorder at some point in their life. While teen and college-age girls are most affected, doctors are seeing more women in their 30s, 40s, and 50s with eating disorders. Anorexia nervosa has the highest mortality rate of any psychiatric disorder; physiological repercussions of anorexia and bulimia can include a risk of heart failure or cardiac arrest, osteoporosis, rupture of the esophagus, ulcers, and dental problems, to name a few. While eating disorders continue to rise—as they have done steadily each decade since the 1930s—the psychiatric community is finding more names to describe them. Orthorexia, a fixation on eating "healthy" to the point of self-harm—such as low-calorie salads for every meal—is a new disgnosis. And binge eating disorder, marked by recurring episodes of compulsive eating, was recently classified as a separate eating disorder. This is an insurance issue, says Kingston-based nutrition therapist Ilyse Simon, "but it also gives people a feeling of, yes, there's a name for this. That decreases the isolation and shame."

The Team Will See You Now

Simon is part of a unique breed of dieticians specializing in eating disorders, and some of her clients travel a distance to see her—Jansen is one of them. Yet Simon and other professionals will say that recovery isn't likely to happen with just one therapist or caregiver. The team approach offers the best chance to overcome an eating disorder. "It's not just me," says Simon. "It's also the therapist, the support group, the doctor. It's the yoga teacher, the partner or friend, the dentist. There are a lot of people on this team reinforcing behaviors and thought patterns." Ideally, a case manager will facilitate communication between caregivers. Some clients need support every day to build new habits that replace months or years of disordered eating. Simon might suggest that a client attend a support group one day, a therapy appointment or a Twelve Step meeting another day. (Eating Disorders Anonymous has a few dial-in phone meetings each week.) Simon also leads a writing group once or twice a year called "If My Body Could Talk," in which people with eating disorders are invited to write about and share their experiences. "A large amount of unstructured time doesn't go over very well," she says. "We like to ground the person every day with support from other people."

When the condition is acute, says psychotherapist and nurse practitioner Sil Reynolds, a more extreme intervention is necessary: round-the-clock care at a hospital or residential treatment center. Admission at a hospital-based program can be a life-saving step if someone is medically unstable. For most cases, Reynolds prefers a residential treatment center, which offers a homelike setting staffed with a range of professionals. "At these centers, women and girls, and men and boys, learn how to live recovery," says Reynolds, whose Stone Ridge-based practice specializes in eating disorders. "There's so much going on—individual therapy, group therapy before meals and after meals, art therapy, dance therapy, biofeedback, all kinds of good stuff." New York is one of the few states that does not have a residential treatment center—perhaps the closest is The Renfrew Center in Philadelphia. Such programs can cost $30,000 or more for a monthlong stay—and most insurance companies will pay only a fraction of this. "It's a travesty," says Reynolds of the insurance obstacle. "Only one in 10 people with eating disorders are getting the proper treatment, which is residential treatment." Perhaps the best local alternative is an intensive outpatient (IOP) clinic like the new LiveWell practice in Albany, which offers four hours of treatment per day, three days a week.