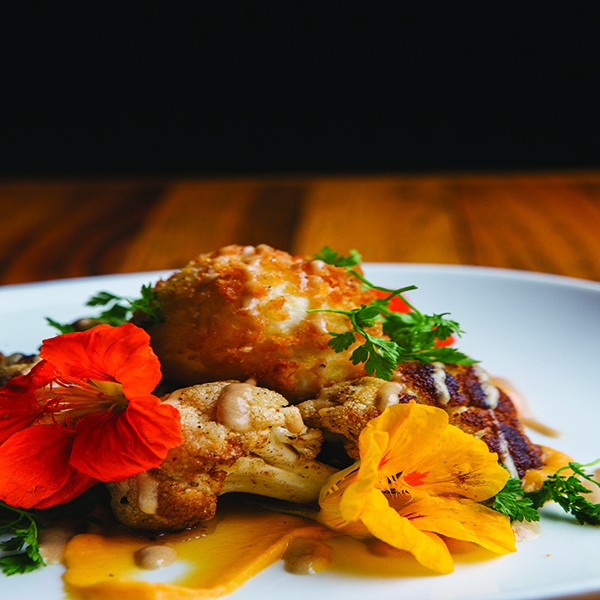 Chef Nathan Snow is frustrated by those who pay the term "farm-to-table" loose lip service. "So many people say they're farm-to-table, and then you see US Foods drive up and frozen chickens coming out of the truck," he laments. Nathan and his wife Bonnie, both city-trained chefs, moved upstate in 2011 and opened A Tavola. The New Paltz trattoria has enjoyed local plaudits—it was named Best New Italian Restaurant in its opening year and Best Restaurant in Ulster County in 2013. At the core of the couple's philosophy is the concept that gives Italian cuisine its regional character—the simple idea of cooking and eating that which is around you.

The Snows met Kris Karl, who runs the Karl Family Farms in Modena, while looking for local chickens to serve at A Tavola. Their families developed a close relationship based on shared enthusiasm for healthy, humanely raised food. "I always find the best customer is someone who has as much passion for what's on the plate as I do for what's in the field," says Karl. When the site of the former 36 Main restaurant became available, Karl brought up the idea of a joint venture.

In February of 2014, the partners opened The Huguenot three doors down from A Tavola. The Karl Family Farms supplies 100 percent of the meat and most of the vegetables. The restaurant pays homage to the town's first European settlers, serving rustic yet refined French-American fare. Call it self-cannibalization, but Snow was sure that Hudson Valley residents would find a big enough appetite for both. "We really believed it could work because it's such a different concept," he says, and he has been pleased by the number of new faces he sees—"definitely more than expected."

The challenges of running two restaurants are allayed by proximity and experience. "We already knew the channels to go through, and what mistakes not to make," says Snow. Snow spends most of his time in The Huguenot's kitchen, while Bonnie manages front-of-house and business ends of both. Snow describes A Tavola's chef de cuisine, Luis Escoto, as a saving grace. "He's literally been with me for a decade, so I trust him, he's great." 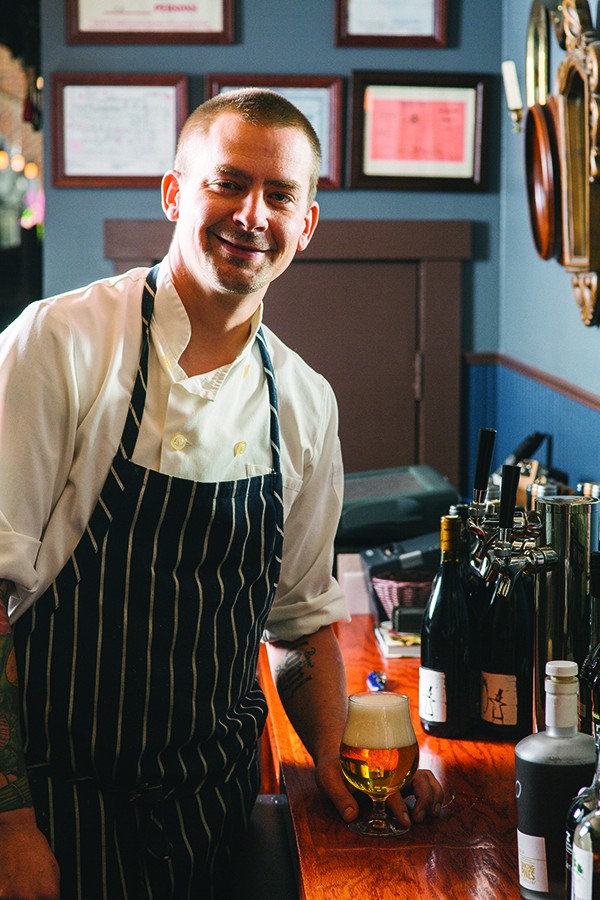 The Huguenot raises the bar on farm-to-table to a symbiotic level that's been dubbed "farmer-chef-food." Snow writes his menu based on what Karl has available at the farm. This keeps Snow and co-chefs Chris Himrichs and Emma Chudkowski constantly on their toes. Karl, in turn, takes on new crops and livestock based on Nathan's needs—or whims. Most recently, Karl raised a round of ducks for Snow, who wanted to try a cassoulet. Before that, it was guinea hens. The Karls have been able to expand their operation to accommodate this built-in customer.

The atmosphere in the restaurant is that of a swank lodge. Walls are a deep royal blue and plain wood fixtures are offset by elegant accents. An exposed brick archway over the rear enclave gives the impression of a wide open hearth. A cast of taxidermic characters looms over diners: a curious ram, a pensive goat, and a wild black boar that was wrestled into final submission by Kris Karl himself. Most prominent is Pablo Elkscobar, an enormous New Mexican elk with a sinister leer, also killed by Karl.

At the bar, one half-expects to spot Ernest Hemingway brandishing a Montenegro Dream ($11): Wathen's single-barrel bourbon, Amaro Montenegro, a spritz of seltzer, twist of orange, and a cinnamon espresso rim—dark, stiff, not sweet. Beverage manager Derek Williams (also of A Tavola), engineered an extensive cocktail menu based on what Snow believes is a need for a higher-end drink program in the region, emphasizing local and craft distillers. Bonnie curates the small list of wines, which reflects strong but approachable showings from the owners' favorite categories.

The rotating dinner menu features From the Field salads, Small Bites & Appetizers, and Larger Fare. Don't ask for pasta—Snow is adamant about differentiating his restaurants. The through-line, however, is fare that's culled from the lay of the land and prepared with the chef's flair for surprise and subtlety. From the very first course, I'm impressed by the way a red wine reduction mingles with the bright juices of braised beets, offering a just-detectable sweetness, and tiny poppy seeds that punctuate the near-unbearable lightness of the accompanying herb-whipped goat cheese ($9). 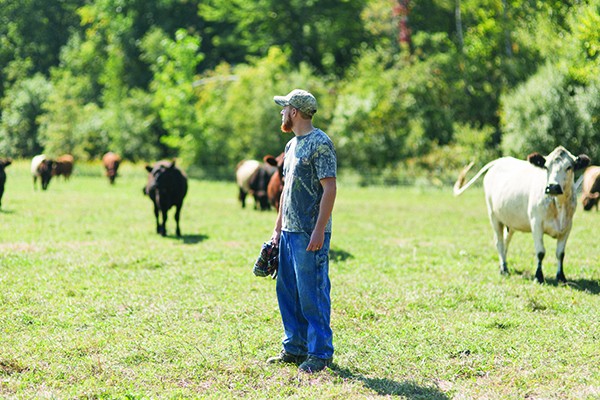 Entrées include traditional dishes that appeal to both the primal and cultivated aspects of the palette. The duck cassoulet ($27) is a haute spin on a casserole steeped (low and slow) in provincial French roots. "This is food substantial enough to strike the mythic chords of memory," raves my dining companion. Butter beans and heirloom carrots, plumped to perfection in stock, take up with the warmth of braised sausage and savor of onion and garlic. Every morsel of the heritage fowl pervades this dish, from the confit meat to the skin-crisped breadcrumbs on top.

The cassoulet exemplifies the waste-not ethos embedded in the farmer-chef-food concept. Dishes are designed to maximize the animal, and all scraps return to the farm as compost or feed. This is why Snow doesn't keep certain cuts in regular rotation. Serving filet mignon every evening would require more cows than the Karls could sustain, and a lot of leftover parts. Instead, the Daily Cut Sheet lists the cut-de-jour of the menu's featured livestock, which is served with a garnish that compliments that particular meat. On my visit, pork and beef are the featured livestock. A grilled loin comes with pilsner-stewed navy beans, sweet local peaches, and fresh green beans ($26); The 10 oz flatiron is paired with Grandma Joan's potatoes, roasted red peppers, chimichuri, and a bordelaise ($28). Love your loin? You can even order daily cuts to go, along with fresh eggs, sausages, and whole chickens, and more from the farm (ask your server).

The staple vegetarian item is also on the Cut Sheet as a somewhat ironic postscript— a grilled flatbread topped with assorted local vegetables and cheeses ($14). There's lots more for vegetarians to forage from in salads and small plates (which range from $8 to $14). The list of $6 sides also includes seasonal vegetables and crispy pommes frites.

Despite the mercurial menu, certain favorites stay in rotation. According to Snow, "people go crazy for the chicken liver pâté." This rich yet delicate spread, suffused with a deep smokiness, hovers atop hunks of grilled bread ($11). All bread is baked on premises at A Tavola by pastry chef Eliza Hunter. The crispy duck egg ($14) is touted as another "sexy" dish (and oh, is it ever). A lightly fried ovum is plated amongst florets of perfectly cooked cauliflower and a creamy, butternut squash puree with bright accents of pine nut and black truffle vinaigrette. One bite of the white and a liquid yolk pours forth, lending a mild flavor to the sweetness of the squash. 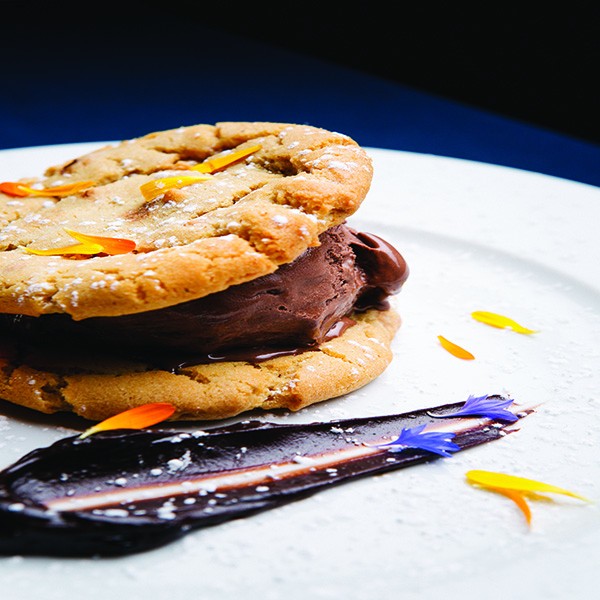 For casual diners, the already famous Huguenot Burger is a draw, served with a choice of a side for $16. Also popular is the Sunday fried chicken special ($26): Two big, crisp legs, prepared with a blend of Herbes de Provence from the nearby Tweefontein Herb Farm and served with two buttermilk cheddar biscuits and whiskey gravy. It's recommended with a glass of Di Lenardo Sauvingon Blanc ($8) and a patio view of the Shawangunks.

As the season turns, the Snows and the Karls are finding creative ways to weather the winter. The Karls have already installed giant freezers on their farm. "We've been focused on finding the right temperatures so that we can bring the frozen product to the table really fresh," says Karl. Greenhouses and roots cellars will keep many vegetables in supply, while the chefs and staff are hard at work canning, pickling, and dehydrating.

The Huguenot embodies what's great about the Hudson Valley. Outsiders become insiders who take stock in their communities and preserve the region's character. "It might be the Italian in me," says Snow, "you're proud of your regional cuisine." Sure it's more work and more money, but for Snow it's simple: "You're supporting your community, it's tastier food, it's better ingredients, it's better for you."

8 Ulster County Restaurants Worth Their Salt