The Hudson Valley's Environmental Activism: Past, Present, and Future

The publication of Rachel Carson's landmark book on pesticide use, Silent Spring, alone makes September 27, 1962, a momentous day in the modern history of American environmentalism. But a front-page story in that morning's New York Times portended another development that would profoundly shape the nascent environmental movement: the utility giant Consolidated Edison (Con Ed) was planning to build the nation's largest pumped-storage power plant at Storm King Mountain in the Hudson Highlands. Con Ed chairman Harland Forbes told the Times "no difficulties are anticipated." He was wrong.

By the 1960s, the deleterious effects of industrialization on air and water quality had become increasingly self-evident. In the Hudson Valley, citizens were beginning to question how and why the river had become so polluted. When Con Ed's plans hit the news, some residents "quickly perceived the proposed plant to constitute a monstrous technological intrusion into a bucolic natural landscape and the defacement of a mountain many assumed had already been legally protected," writes Robert Lifset in his book Power on the Hudson: Storm King Mountain and The Emergence of Modern American Environmentalism.

Opposition was indeed swift. By November 1963, a group of local activists had banded together to form the Scenic Hudson Preservation Conference, which petitioned the US Court of Appeals for the Second Circuit to overturn the Federal Power Commission (FPC)'s decision to issue a license for the Storm King plant. In the opinion, Judge Paul Hays wrote that the FPC had to consider the proposed plant's impact on the landscape: "The Storm King project is to be located in an area of unique beauty and major historical significance."

Scenic Hudson Preservation Conference v. Federal Power Commission wasn't the end of the battle over Storm King—Con Ed didn't drop the project entirely until 1980—but in winning the case, environmentalists set an important precedent: citizens now had standing to challenge executive branch decisions in federal court (a provision later written into the Clean Water Act), and to do so on the basis of historical significance and natural beauty (a standard codified by the National Environmental Policy Act in 1969).

The legacy of Storm King continues to be felt locally in the conservation and ecological work of organizations, including Scenic Hudson and Riverkeeper, that grew out of the fight. In his essential history, Embattled River: The Hudson and Modern American Environmentalism, David Schuyler writes, "The Court of Appeals, in granting and affirming Scenic Hudson's standing, established a precedent that other environmental groups and citizen activists would use effectively in succeeding years."

The Past as Prologue

In the decades since the Storm King battle, the grassroots resistance to corporate industrial threats has coalesced into a diverse network of nonprofits and environmental advocacy groups, land trusts and conservation organizations, and public agencies with a broad, lasting mission to protect the ecological diversity and landscape of the Hudson River Valley. Educational awareness and activism are now interwoven with the recent history of this region. The environmentalist J. Winthrop Aldrich, who helped challenge the construction of a proposed nuclear power plant at Cementon, perhaps put it best during a 2012 panel held by the Olana Partnership when he described the Hudson Valley as the "great national arena of the battle between the engineer and the poet."

Scenic Hudson and Riverkeeper are the two most notable private-sector stewards of this legacy, but there are many others. The Hudson Valley GREEN (Grass Roots Energy and Environmental Network) Coalition grew out of three citizen-organized energy-activist groups in 1981; it has helped prevent construction of multiple power plants that would be eyesores on the landscape and cause ecological damage to the area and was instrumental in the actions that convinced Governor Cuomo to phase out the Indian Point nuclear facility. The Hudson River Environmental Society, a nonprofit founded in 1970, conducts research and hosts workshops on environmental issues in the Hudson Valley.

Keeping the Hudson River Alive: Chronogram Conversation with Riverkeeper at Sloop Brewing Co.
A discussion on the impact environmental changes/pollution have on our rivers.
By Phillip Pantuso
Chronogram Conversations
The sloop Clearwater and its organization, founded by Pete and Toshi Seeger, have heightened awareness of the river through educational programs. The Open Space Institute has preserved 149,000 acres of land through direct acquisition and conservation easements and runs the Citizen Action program which offers oversight for mission-aligned projects started by concerned citizens. And local land trusts from Westchester to the Catskills have protected thousands of acres of land.

As Schuyler notes, public agencies have also played an important role in preserving the Hudson Valley, largely by coordinating efforts regionwide—crucial, given New York's "home rule" law. In 1987, the Department of Environmental Conservation founded the Hudson River Estuary Program, which has helped protect wildlife and scenery, educate the public, and clean up the water across the entire 13,390-square-mile Hudson River watershed. And in the 1990s, congressman Maurice Hinchey wrote legislation designating the Hudson Valley a National Heritage Area and creating the Hudson River Valley Greenway, a state agency that coordinates land-use planning across local governments.

So much of what we love about the Hudson Valley today—parks, creeks, recreational opportunities, cultural heritage sites—might not exist without the efforts of concerned citizens beginning in the 1960s. The Hudson runs clearer now then it has in decades, but most of the fisheries are still closed, and the land remains threatened by industry.

Two recent cases highlight the ongoing tenacity of local environmentalists. In 2015, activists thwarted a proposed bottling facility at Cooper Lake. Niagara Bottling's plans included the purchase of 1.75 million gallons of water per day from drought-threatened Cooper Lake, the largest natural lake in the Catskills and the main reservoir for Kingston. 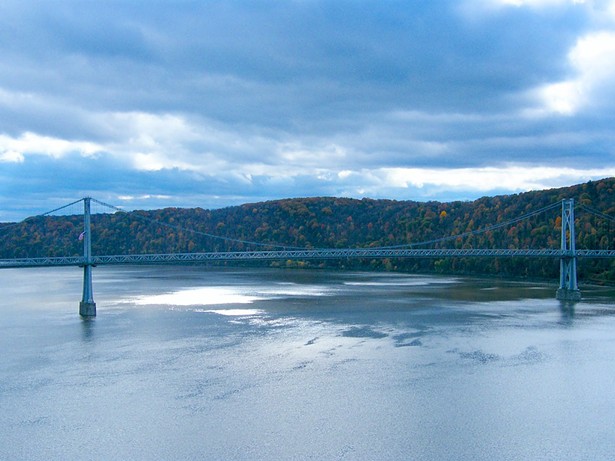 At nearby Onteora Lake, there's an ongoing struggle against a steel and concrete plant near the Bluestone Wild Forest. An entity called 850 Route 28 LLC, owned by developer Tom Auringer, filed a proposal to build two 120,000-square-foot buildings, necessitating the clearing of 21 acres of trees and moving 405,000 cubic yards of material with a rock crusher running 11 hours per day over a five-year construction phase. The site is currently being used to store cranes Auringer has used for other projects, based on a permit issued to the previous owner.

Representatives from the Open Space Institute and Woodstock Land Conservancy, both of which own and administer land adjacent to the site, immediately reported that they had not been notified of the proposal, which would potentially impact OSI's plan of adding 208 acres to Bluestone Wild Forest and recreational activities in the area. The Woodstock Land Conservancy circulated a fact sheet measuring the ecological and quality of life impacts of the facility, questioning many of 850 Route 28 LLC's claims about its economic benefits and certification standards, and calling for an Environmental Impact Statement to be prepared.

Word has spread, and opposition appears to be fierce: a July public hearing on the application in Kingston was shut down before it even began when the audience size exceeded the meeting room's 150-person capacity.

A new era of post-industrial development in the Hudson Valley has resurfaced the age-old tension between nature and commerce in this resource-rich region. Pete Seeger once said, "The world is going to be saved by people who fight for their homes, whether they're fighting for the block where they live in the city or a stretch of mountain or river."

The battle for Storm King changed environmental law, but its greatest impact was to reawaken Hudson Valley residents to the region's splendor—and their own role in preserving it. This clarity of vision has been necessary for the work that has followed. "The 1960s and '70s sparked a new appreciation of the river as a scenic, ecological, and historic treasure, a storybook on which the pages of American heritage are written," writes Hudson River Estuary Program director Frances Dunwell in The Hudson: America's River. "And yet, the pressure on the Hudson has never been greater."

By Lissa Harris and The River Newsroom