The Hudson River School via Cincinnati 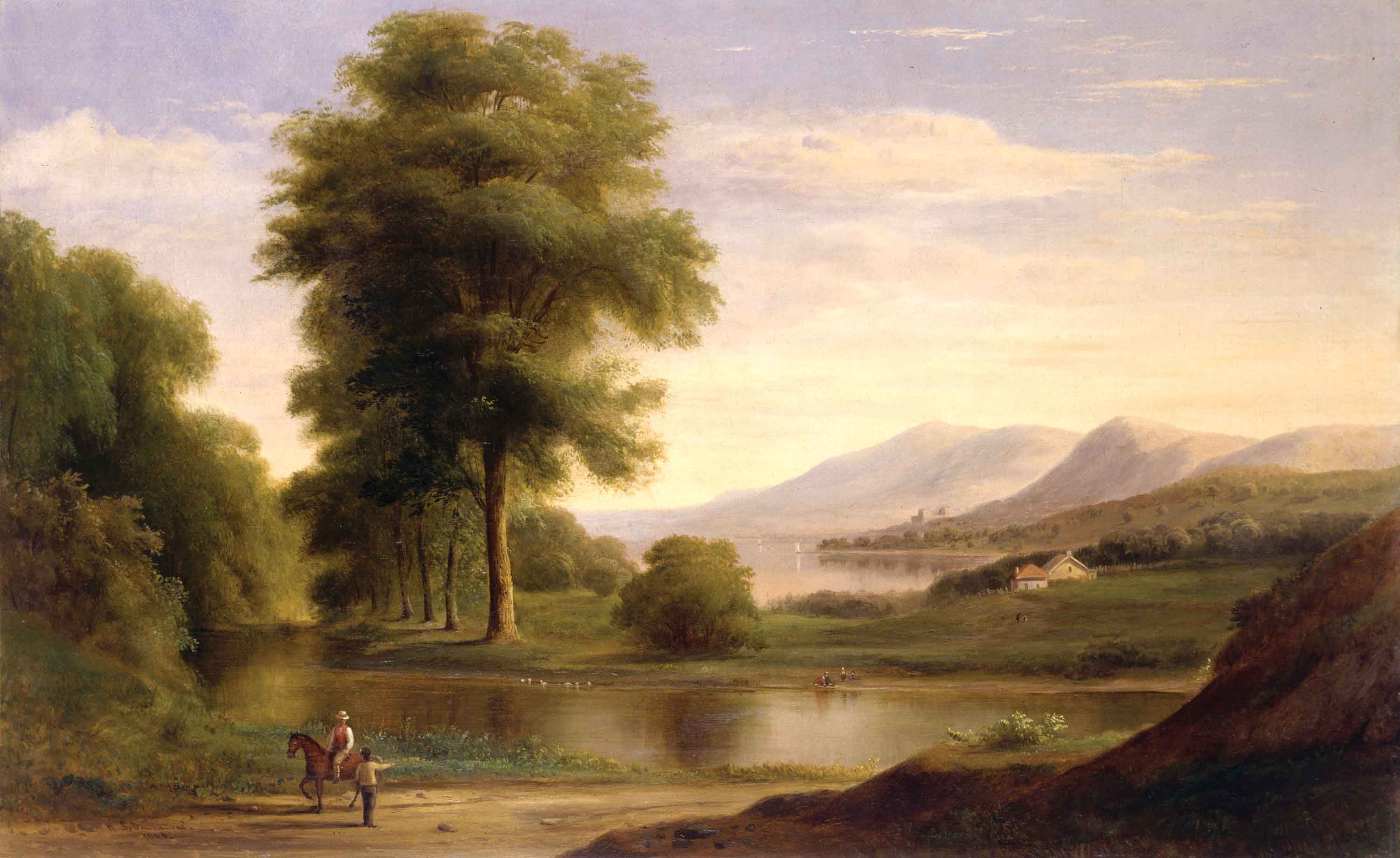 Born a freedman in Seneca County, New York, Robert Duncanson moved as a youth to Michigan. At the age of 16 he apprenticed to a house painter, then briefly began his own painting and glazing business. In 1840, Duncanson resolved to become an artist, relocating to Cincinnati, the largest city in “the West.” The youth taught himself to paint by copying Thomas Cole paintings and sketching from life. He became an itinerant portraitist, then moved on to nature scenes.

By the 1850s in Cincinnati, the two most popular art forms, landscape painting and daguerreotype photography, were dominated by African-American artists. James P. Ball was the preeminent daguerreotypist, Duncanson the top painter. Both men were light-skinned “mulattos,” of mixed race, benefiting from the racial caste system of the time. Cincinnati was a northern city, in a “free state” (one without slavery) whose economy and social outlook were Southern. “Cincinnati was one of the most vociferous abolitionist cities, behind Boston, and it was also one of the most adamant pro-slavery cities, simultaneously—a very, very complex dynamic,” explains Ketner.

In 1855, Duncanson and Ball painted a 600-yard antislavery panorama entitled “Mammoth Pictorial Tour of the United States Comprising Views of the African Slave Trade.” This work consisted of a canvas wrapped around two large dowels, which would be unspooled in an auditorium to the accompaniment of an orchestra, with lighting effects and a narrator describing the changing scenes. The “Mammoth Pictorial Tour” traveled the country, advertised as “Painted by Negroes.” Sadly, it is no longer extant.

Most of the portraits Duncan executed were of antislavery activists. He painted “Uncle Tom and Little Eva” based on Uncle Tom’s Cabin, commissioned by an abolitionist minister, and donated at least one canvas to an antislavery bazaar. As the United States lurched toward a cataclysmic war, Duncanson’s paintings entered the national debate.

But Duncanson was also fascinated by the exotic. He painted four versions of “The Veils of Kashmir,” inspired by the book Lalla Rookh: An Oriental Romance by the poet Thomas Moore. Two of these works are in the show. Ketner gave one newly discovered painting the slightly vague title “Allegorical Figure,” because he’s not positive which allegorical figure is depicted. He suspects it’s a peri, an angel-like being from Persian mythology. (Many of Duncanson’s paintings have no titles, having been lost for decades.) These Orientalist pictures are reminiscent of Shiva posters contemporary New Agers hang in their meditation rooms.

It is tempting to interpret Duncanson’s landscapes politically. Those dreamy temples on the shores of rivers—are they images of a utopian world without slavery and racism? Or does that oversimplify them? Duncanson himself once told his son, on the issue of race, “I have no color on the brain; all I have on the brain is paint.”

This is apparently Duncanson’s first solo exhibit west of the Mississippi, ever. “When the Cole House called me, knowing Duncanson’s work is very clearly completely indebted to Thomas Cole, I thought, ‘What better way for me to service Robert Duncanson’s legacy!’” remarks Ketner.

A handsome catalog accompanies this show (which takes its title from W. E. B. Du Bois’s The Souls of Black Folk).
“Robert S. Duncanson: ‘the spiritual striving of the freedmen’s sons’” will be at the Thomas Cole National Historic Site in Catskill until October 30. (518) 943-7465; www.thomascole.org.