The House That Seems to Smile

Design on a budget in New Paltz 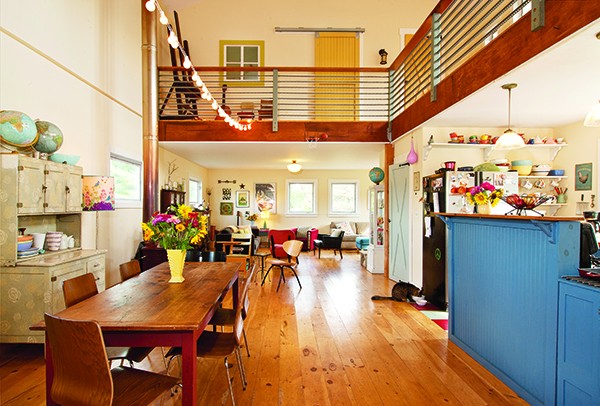 Some people know how to have fun. Jasmine Redfern and her husband, Cordell Stahl, are such a couple. With their son, Parker, who also seems to enjoy life (cue the 14-year-old skateboarding across the living room), they've created a house that seems to smile as it sits beside a country road south of New Paltz.

First, it's important to understand that this house was created by people with vision as well as the ability to have a good time. Only people with vision could have transformed a hopelessly unattractive ranch house set on a massive lawn into a truly fun house with soaring ceilings and personality to spare, with a view of acres of meadow out back.

"When we closed on the property," Redfern remembers, "we looked at each other and said, 'Oh my God. We just bought a trailer.'" It looked like a double-wide, but it sat on three open acres and it was affordable, even for a family on a budget.

"We spent that winter taking off the siding right down to the studs," Stahl continues. "And what we've ended up with is something that is naturally one of a kind because we put ourselves into it."

Redfern, a designer of vintage-inspired lighting and accessories, and Stahl, an actor, wanted their new home to have a minimal carbon footprint. Their home design put many windows on the south side to take advantage of passive solar heating. They created a second story that is open to the first floor, allowing the woodstove in the center of the living area to warm the entire building. And they exercised their imaginations throughout the home, incorporating repurposed and reclaimed materials. New wood that was left over became a chicken coop that Stahl built himself. They salvaged as much of the original house's wood and insulation as they could and used it to create Redfern's studio in the former garage.

"I have learned how to jack up a building," Stahl says, pride and surprise mingling in his voice. "We taught ourselves routing. We didn't have a lot of money, so out of desperation we learned to do a lot of things ourselves."

They didn't want a huge lawn. They have let the meadow grow over most of the backyard and it is now difficult to imagine that it hasn't always been there.

"The neighbors filled in a vernal pool on their property because they thought it bred mosquitoes," Stahl says. "But all the toads that lived in it ate mosquitoes. So I dug out the vernal pool in the back of our property, it filled with water, and all the toads have moved there." 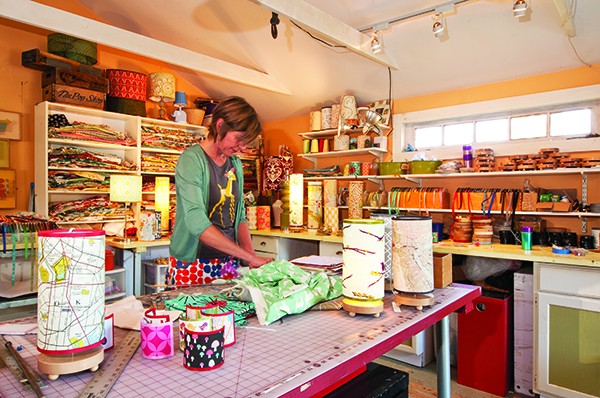 Second, it helps to understand the design's roots.

Redfern grew up in New York City, and the couple says the industrial elements in the house can be traced to that influence. Stahl is from Portland, Oregon, and the couple met in the city. But he loved the country.

When they got married, they knew they wanted to put down roots upstate. Stahl says when he saw the nightscape overhead at the new house, he knew the sacrifice of commuting to the city for work was worth it for him.

Redfern's commute is much shorter—her studio is just across the driveway. Inside is a riot of color and an easy-to-follow connection to the décor of the house. She makes lamps and nightlights, a business she's had for almost 20 years. Her work appears in catalogs, shops, and galleries.

"I love colors and shapes," she says. "I'm a big fan of vintage fabrics and patterns."

Her goal with their home was to create a space that was fun. She says she's been told their house looks like a place where kids live. "We like games," Redfern says. "We wanted a house where we could entertain."

What they've created is a house that lives casually. They put down wide pine floors and Parker's indoor skateboard helps create the distressed finish they wanted. You might call it the fun person's shortcut to custom finishes.

Barn-style bedroom doors slide to the side on metal rails and exterior windows installed on interior walls bring more light to the rooms while preserving privacy. A Nerf basketball hoop hangs above the living room. 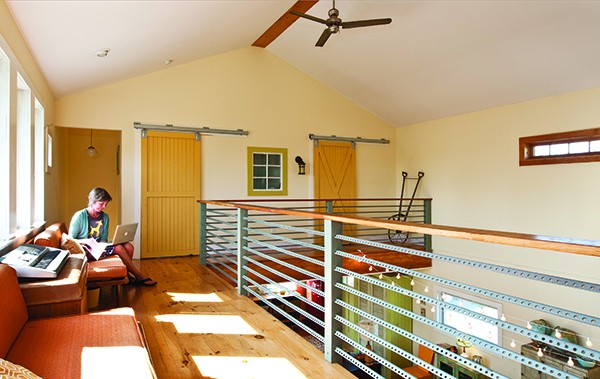 Nothing Matches, Everything Is Harmonious

Some elements are fun and practical—a massive counterweight on an antique pulley makes opening the floor hatch to the basement easier. A red metal school locker ("We found that at the dump," says Redfern) creates storage by the front door. A `50s diner-style table and chair serve as a downstairs workspace. A Mission cabinet creates storage as well as a visual break in the space for the dining area.

The kitchen, with its hand-painted checkerboard floor, is compact and functional, overlooking the meadow out back and open to the living area.

The end of the house that serves as a living room features a wide variety of seating, from a row of wooden folding chairs to a loud, red upholstered chair that Redfern threatens to throw away and Stahl loves. A dental cabinet that belonged to TV Judge Judy's dad and a stenciled Hoosier cabinet line one wall. An old school desk that Redfern said they found on a burn pile has been restored and faces the dining table. Nothing matches, yet everything goes together harmoniously. The colors are bright, and dotted throughout the house are lamps made by Redfern that help create a visual flow. It is, the couple says, design on a budget. "Everything is old or IKEA," Redfern explains.

"I taught myself woodworking by doing it," Stahl adds. "I'm a little embarrassed by some of it now."

Most of the furniture was painted by Redfern, who covered cabinets with color and words, in some cases poetry or song lyrics."My mother taught typography, so I love words," she says.

The bedrooms, three in all, are small. "That's by design," Stahl says.

"We wanted to maximize the open feeling on the second floor," Redfern continues. So we kept it open to the first floor."

The upstairs rail is made of metal shelving corner pieces that the couple flipped upside down and installed themselves. Two long Danish modern sofas rest against the upstairs wall overlooking the living area below, conjuring visions of parties that spill up the stairs and fill the walkway.

The house and the studio are, like most vibrant things, works in progress. Redfern hopes to expand her workspace one day. Curtains hide the space under the stairway where Stahl plans to build a closet. The bedroom and bathroom closets aren't done yet. But the upcoming project Redfern is most excited about is the stairway landing. "I want to paint rhumba dance steps on the floor," she says. "Don't you just think when you stand there you'll have to do a little dance?" 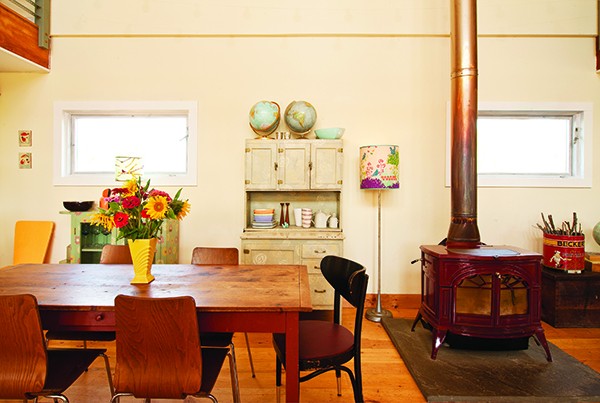